Take Your Lumps And Move Along

Most people equate taking a loss with admitting defeat. As a trader it is crucial for you to understand the difference. Taking a good loss is equally as important as taking a good winner.

As always your mindset matters: If you treat each loss as an act of defeat then it will be natural for you to be wanting to avoid taking that loss, it’s simple human nature.

This is why traders often go to great lengths to avoid taking a loss. Keeping a losing trade open and hoping for it to ‘turn around’ by ignoring your stop loss or attempting to ‘fix a trade’ by adding additional legs can quickly turn a small insignificant loss into a big one that threatens your ability to bounce back.

On the surface this sounds like basic trading 101, but you’d be surprised how many experienced traders still fall into this psychological trap on recurring basis.

Perhaps you feel that taking a loss after a long winning streak is a luxury you can afford but quite the contrary is the case. Not taking losses is a sure-fire way to financial ruin.

Here’s a rule you should be pinning to the wall on top of your trading station: “Taking a good loss gives me the opportunity to redeploy my capital to a potential winning trade.”
Plus holding a losing trade violates the very prime directive of trading: Always define your entry and your exit BEFORE taking a trade. No exceptions.

This in turn assumes that you are actually trading with a system that has a proven long term edge. Without one you are basically shooting from the hip, relying on your personal whim, mood of the day, or subjective judgment to enter a trade..

In the words of Benjamin Franklin: “If you fail to plan, you plan to fail.” Trading is no different.

Long term success as a trader hinges on your conscious ability to accept both wins as well as losses as two inseparable parts of the process.

Now if losses were randomly dispersed then many traders may have an easier time accepting them. Unfortunately however it’s quite common to alternate between distinct losing and winning periods.

Of course some of that is pure randomness but quite a lot can be attributed to distinct market phases which in most cases only become clear in hindsight.

A mean reversion based trading system for example will perform best while the market is pushing sideways while a trend trading system can only be profitable in a highly directional market.

No matter what system you trade, the odds of experiencing a series of consecutive losses increases with both your win percentage and the number of trades you take. 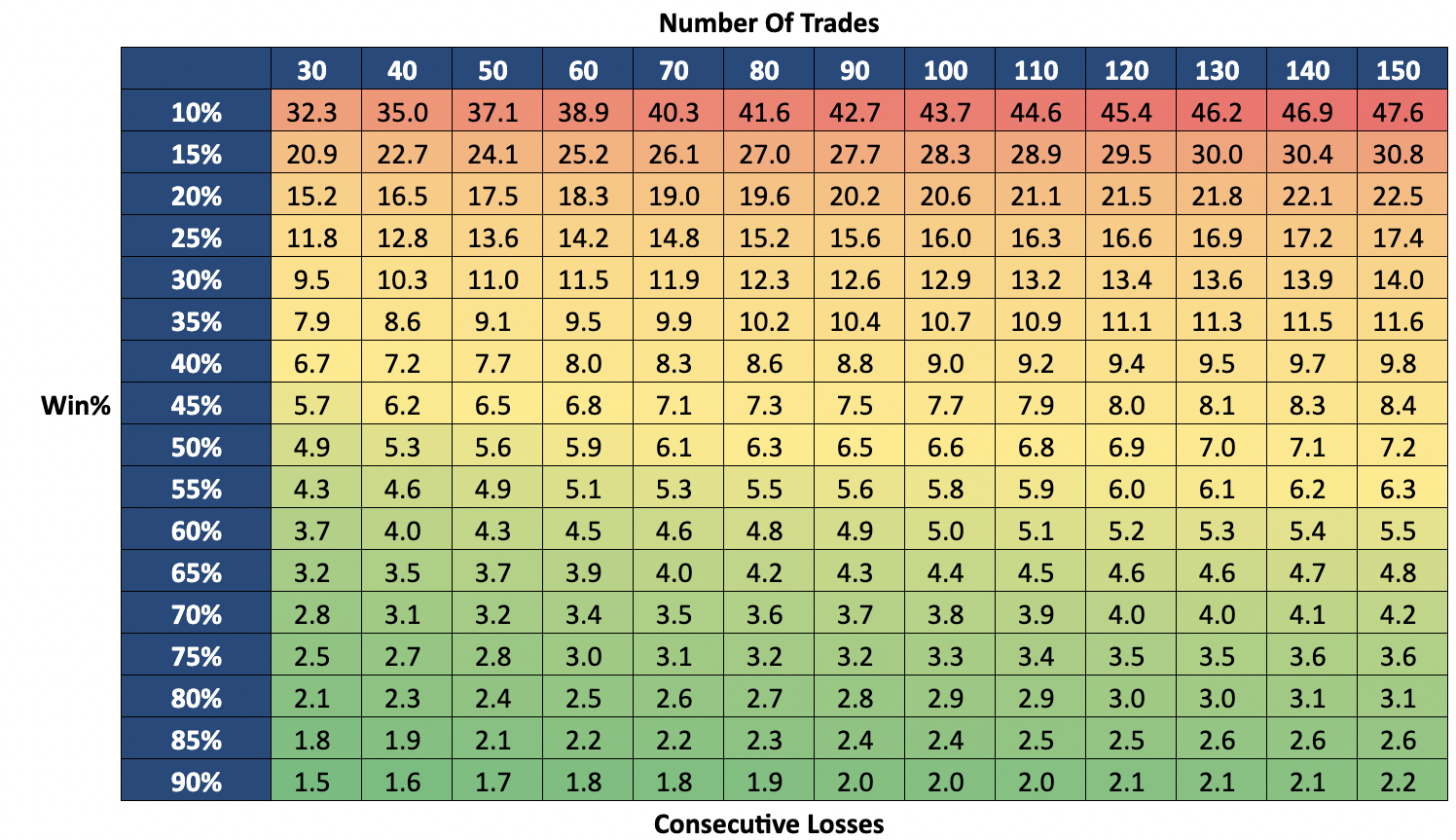 The spreadsheet above makes this very clear. Statistically speaking a trading system with a win percentage of 75% (which is very high) is still expected to experience at least 3 consecutive losers within 100 campaigns.

A trading system with a 50% win rate on the other hand should be expected to rack up nearly 7 consecutive losers within 100 campaigns.

Consider for a moment you trade such a system, which isn’t uncommon. You have just taken 6 or 7 losses. Then you finally get one single winner and the clock resets.

During an unfavorable market phase it’s quite possible that one winner will immediately be followed by another loss or perhaps two or three losses. Which makes capital commitment guidelines and position sizing ever more crucial.

If you trade long enough an ‘unexpected’ series of losses is exactly what will happen to you and the only way to avoid blowing up your trading account is to take those losses and continue trading your system’s rules just like a robot.

This may sound completely counterintuitive, but attempting to modify a proven system during a losing streak is tantamount to committing system suicide.

Basically you either didn’t do your homework and assumed the best case scenario, or you knew what you were facing and now that a high probability event has occurred you are losing confidence in the entire system.

None of that makes any sense, and that’s why understanding your anticipated loss percentage and being mentally prepared to take them are important hurdles to overcome to long term trading success.

The best way to handle losses is to simply accept them as ‘part of the process’. Don’t ignore them but don’t stress about them either.

Instead carefully log each loss along with your wins, and make sure that any losing trade was taken in the spirit of the rule based system you are trading.

If that is the case then it’s considered a ‘good loss’ which should be acknowledged and accepted as an unavoidable aspect of trading life.

Before you run: the new year is here and it’s time to put yourself on the fast track to building your own trading business.

With RPQ Unlimited, you’ll receive all the trading education you will ever need to be a successful trader. 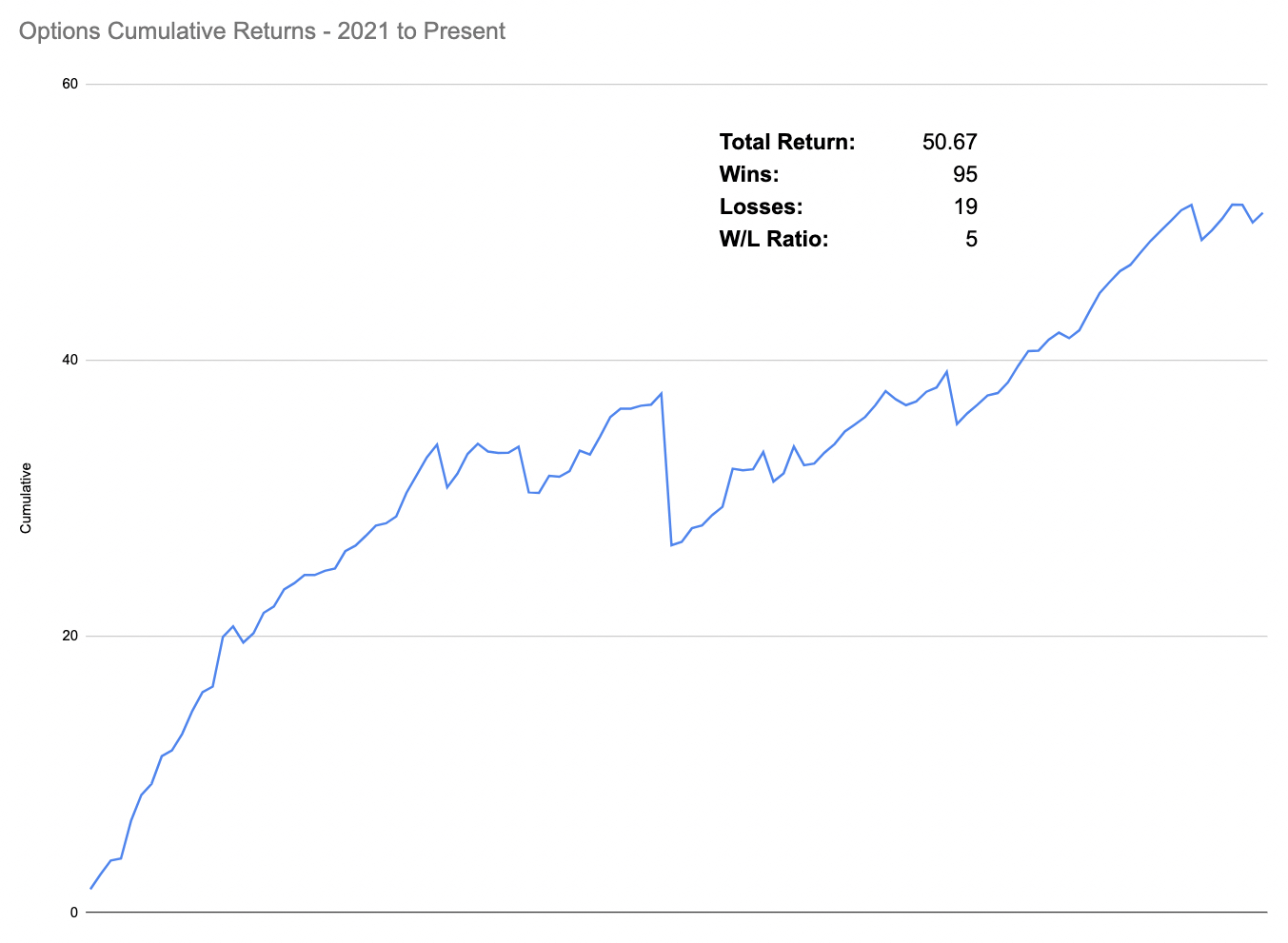