Volatility Strikes With A Vengeance 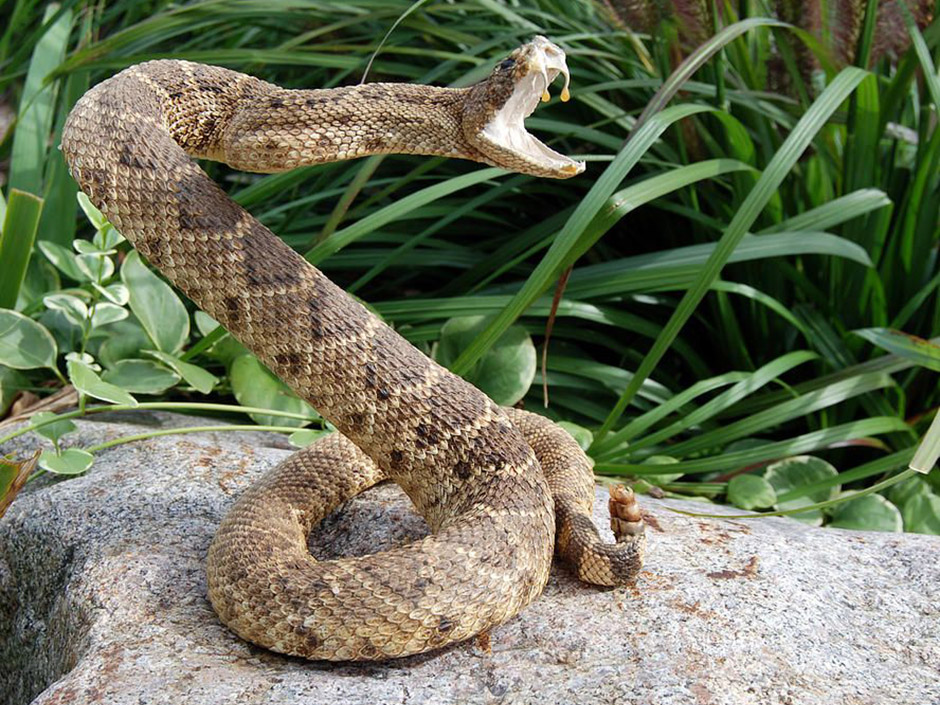 The VXX ranks amongst the top most hated ETFs of all time and it has retained its bottom of the barrel reputation since its introduction in 2009. It is despised for many reasons but mainly because it’s a terrible investment on a long term basis due to its factory installed value leakage. This is courtesy of the fact that it’s tied to the value of the SPVXSTR index, which in turn tracks a pair of VIX futures contracts.

Staying in sync with the SPVXSTR and by extension a pair of monthly changing VIX futures contracts creates small but constant value decay due to roll or contango loss as the front month VX contract is priced lower than its following month around 85% of the time. 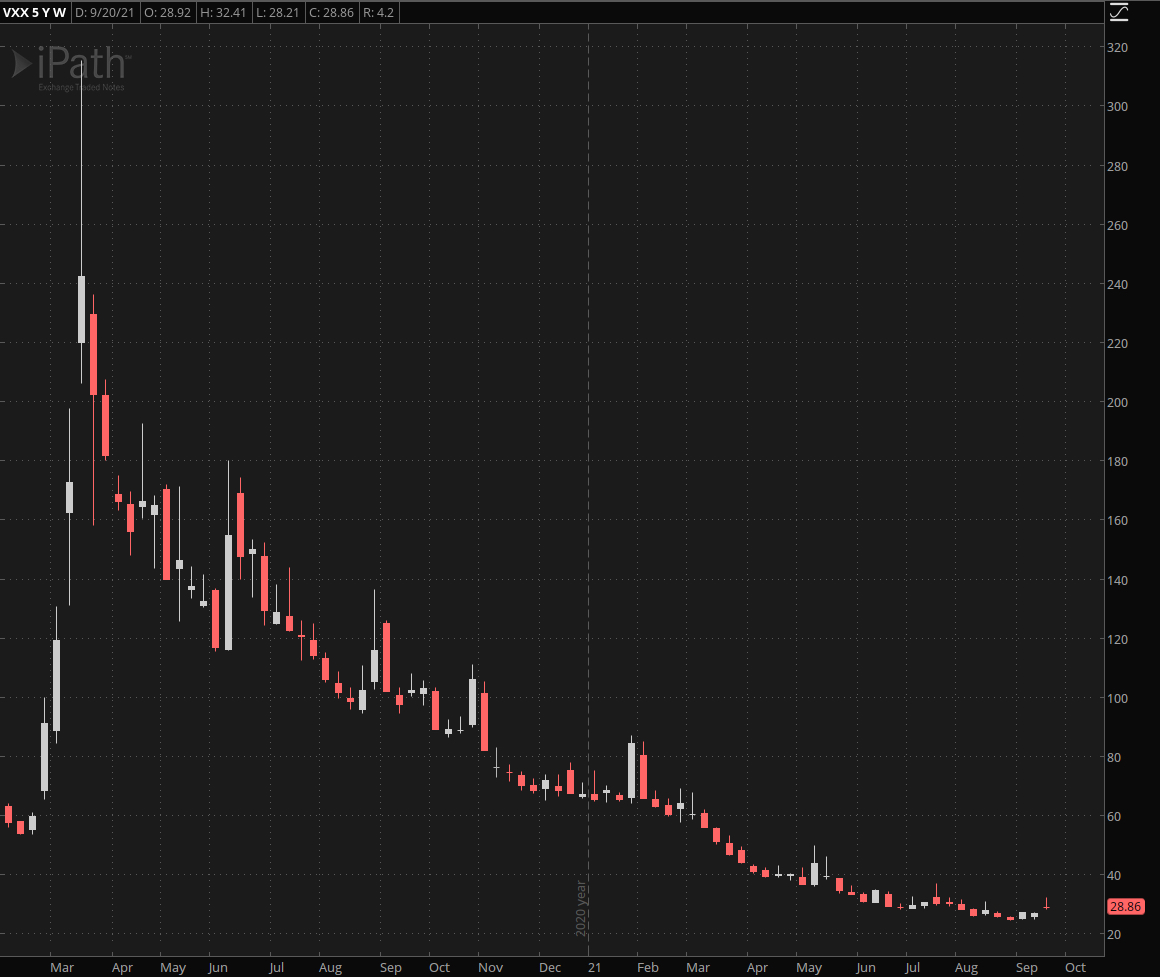 Designed as an inverse ETF in 2009 it seemed like a great idea at first glance. Finally, people thought, I can hedge myself against market volatility!

Numerous reports on volatility hedging had been issued at that time and all concluded that a long-term instrument for hedging against sudden explosions in IV (especially post the 2008 crisis) was needed. Barclays took them at their word and soon released the VXX as we know it today.

So the money piled in and almost immediately the slow motion blood letting began. The rest of the story as they say is history.

Now I know what you are thinking: Why would anyone in their right mind ever touch the VXX with a ten foot pole? If you’re an inexperienced trader I would fully agree with that sentiment. These days it’s mainly used a short term trading vehicle, purportedly for a one-day or two-day bet on implied volatility.

In reality however even that rarely works out as planned evidenced by a legion of retail investors who have lost literally billions of dollars betting on the arrival of Godot within a limited timespan. When it comes to the VXX the bet is heads you lose tails I win. 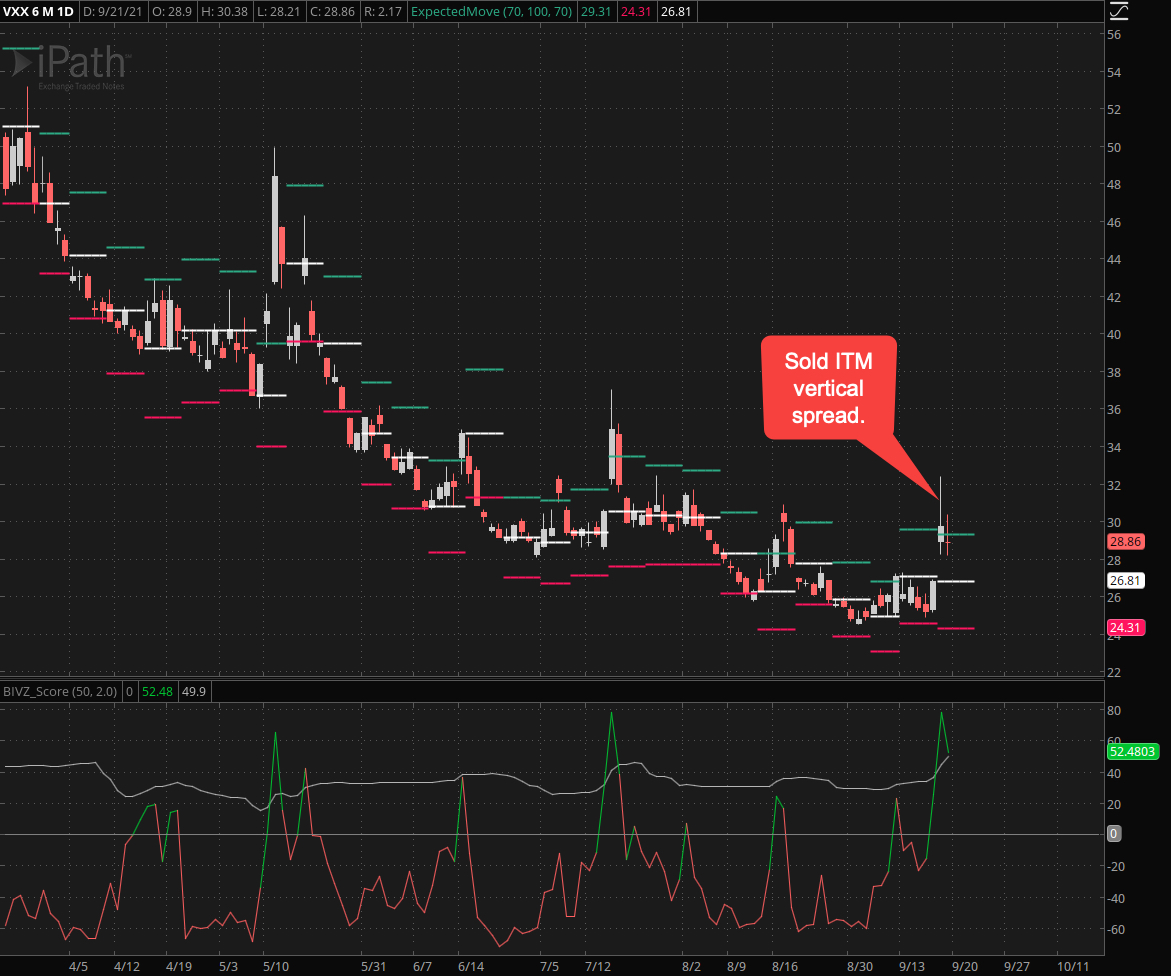 So when does it make sense to trade the VXX? The answer is almost ALWAYS! But probably not in the way you think as taming this value stomping beast requires a bit of finesse, combined with foresight and contrarianism.

Per my own statistics post the 4/1/2018 debacle the VXX as well as it’s ugly cousin the UVXY lose about 1% per week on average, and that includes all positive weeks. 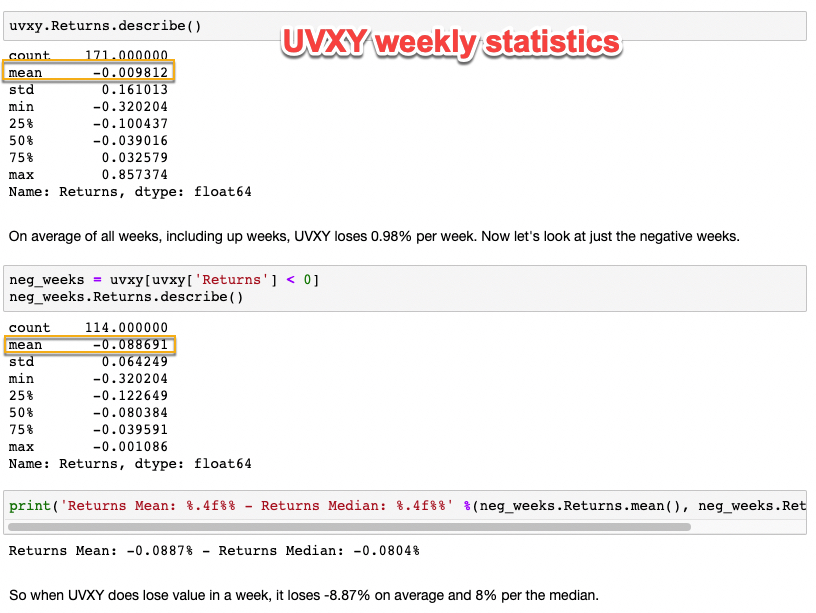 But it gets better than that: When both the VXX and UVXY do lose value in a week, they loses -8.87% on average. Let that settle in your mind for a second as that’s a massive loss which incidentally happens around 67% of the time per week (again I ran the stats on that). 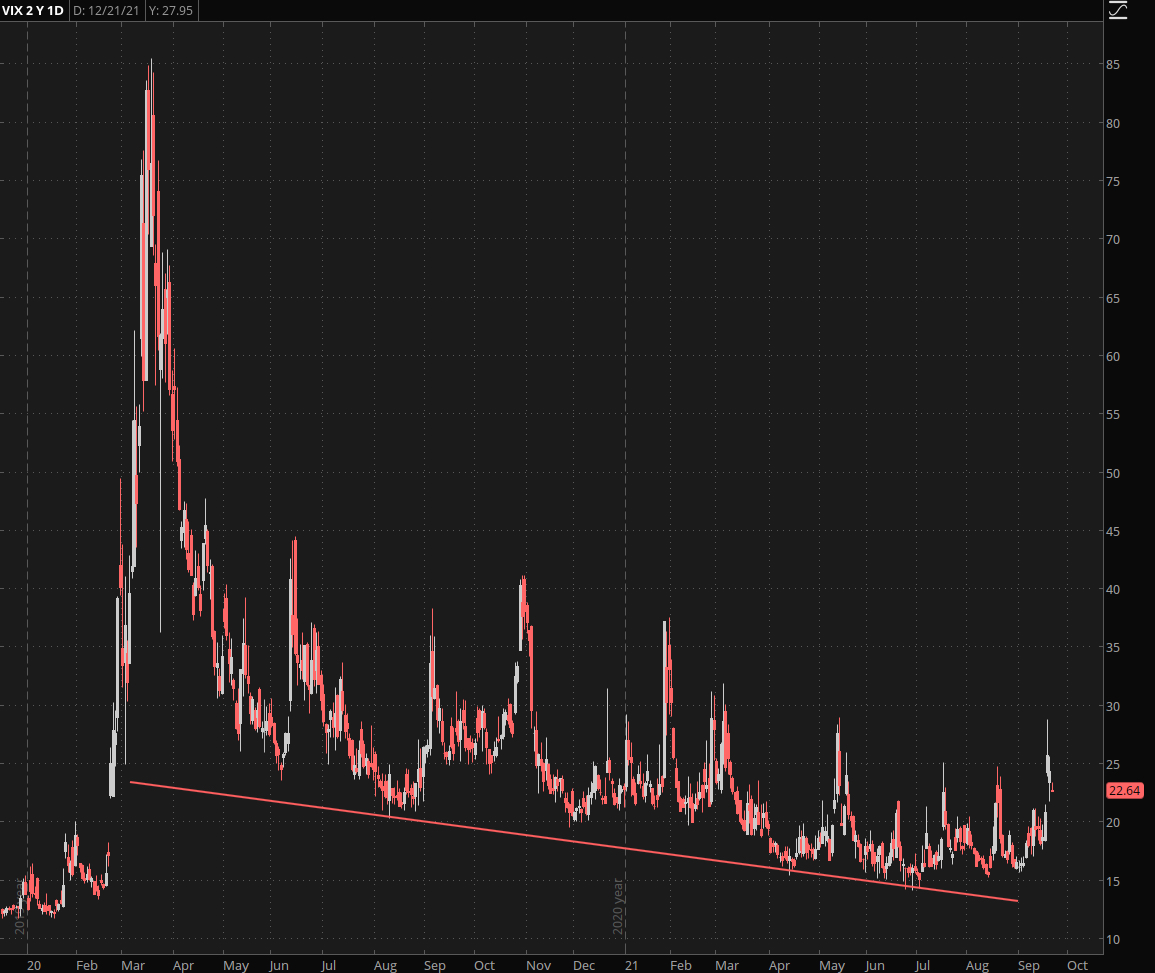 Which is the very reason I sold an ITM VXX vertical spread on Monday when the VIX was spiking around the 26-27 mark (if you’re a sub over on RPQ you are probably in this trade right now).

On a long term basis the odds are always on our side but during massive IV spikes the odds of mean reversion increase from about 67% on average to over 85%. 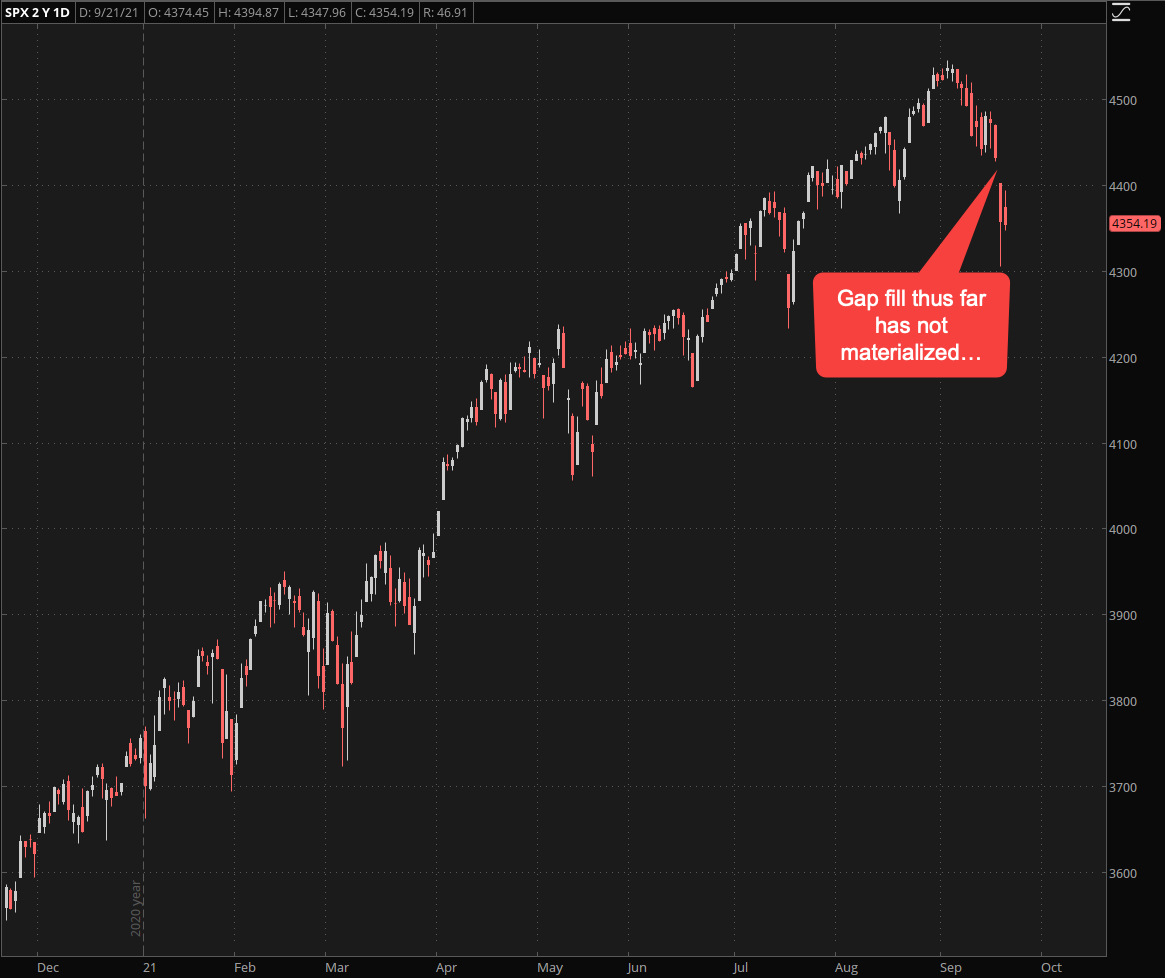 The only problem with this strategy is that MOST of the time we should see a reversal attempt – but not ALWAYS. In fact yesterday’s failure at a gap fill opens the door to even more ugliness during what is by all intents and purposes the most fragile and crash prone period of the entire trading year (see Monday’s post for more details).

From a pure price pattern perspective (say that one four times in a row) we now face a key bearish inflection point around SPX 4300. If we see a drop through that then you better dress up warm because hell will most likely freeze over and cause us to slip all the way down to the 4100 mark and perhaps even lower.