With what’s been happening in the world the past 4 weeks, a lot of people are coming out of the wood work and smelling opportunity. As people who spend a great deal of time trading, Mike and I have an influx of texts, phone calls and e-mails from friends, family and clients about putting some long term capital to work.

The common theme I see among most casual investors is the confusion between trading and investing. The rules for each are much different and many trading rules do not apply to investing. Likewise, many investing rules do not apply to trading. Swapping these rules sets will get you the financial equivalent of prison raped while you have to hold the boom box blasting Air Supply.

Let’s look at the difference between the two and start with a great example of investing, Warren Buffet.

A few weeks ago, Warren Buffet was talking about what a great deal AAPL was. He was almost foaming at the mouth with excitement about it.. he seemed to be deploying every ounce of his will power into holding back on wanting to get up and scream and shout about how excited he was that AAPL was on sale. 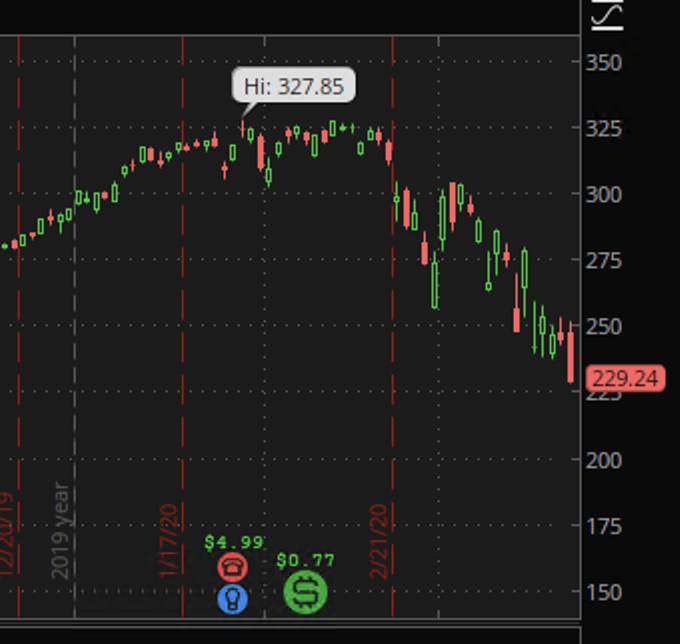 AAPL went out at 229 on Friday, down from its all time high of 327 less than 2 months ago. Which is about 40 points less than when Mr. Buffet was ready to rip off his shirt and start dancing on CNBC.

With investing, I generally never put my entire position on at once. I buy in minimum chunks of 3. If my goal is to devote 12% of my capital to one investment, I’ll set aside 12%, and buy in 3 lots of 4% each. 3 x 4% = 12%. Like Warren, if the underlying thesis is intact and the asset is on sale, I’ll add to my position.

Even though I’m operating at a short term loss. If I bought my first chunk of AAPL at 270 and the price is 229 now, I’ll buy more at 229, even though my position is underwater. I’m not concerned about the short term, I’m thinking 5 years down the road. I’m OK with short term pain of a loss.

Some of the better investing advice from Jim Cramer also advocates a similar approach of buying in chunks, rather than all-in at once.

I’ve been using the 3-chunk rule for so long I don’t even know where I got it from… I’ve read so many books, studied with so many investment people that these rules were probably a result of osmosis from studying all of this stuff like a deranged lunatic. But these have served me very well for my investments and you’ll see many pros do something similar.

This practice of adding to an existing stock position when it’s on sale is known as averaging down. It works very well for investments, provided we have clear limits on how much capital we plan to devote to the investment. And the obvious, that the underlying thesis on why we like the investment is still intact.

Now, let’s look at a trade. To make it exciting, let’s use a real scenario unfolding right now. The airline stocks have been smashed into the ground and let’s just pick one, AAL, since it’s one I trade regularly. 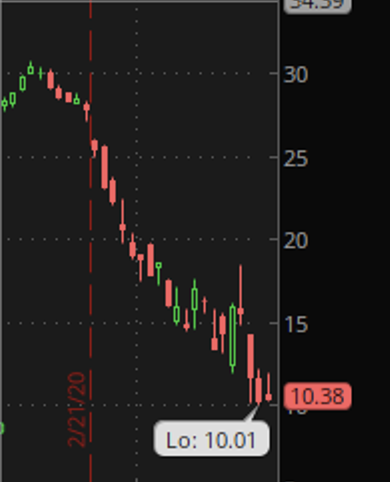 AAL was in the upper 20s, hitting a high of 30 and change in late 2019. On Friday, it touched 10.01, which I believe is the all time low since they emerged from bankruptcy and as a recapitalized company. AAL has lost 66% of its value and the puts that expire on August 21, 2020 aren’t exactly inspiring confidence in a quick rebound.

The airline industry is asking for a massive bailout package from the federal government. It’s so massive, that I have a hard time seeing how the airlines can shackle themselves with so much debt and expect to pay it off in any reasonable time frame.

There is a good chance these companies are saved, but the common stock is wiped out. Much the same way GM and Chrysler were during the 2008 housing crisis and became government sponsored entities (GSE). The government came in, saved them, recapitalized the companies and then issued new stock to pay back the cash they used to bail the companies out. It worked.

So our trade thesis is that AAL stock gets wiped out, it’s going to $1. Using the magic of options, we construct a trade that explodes in value if AAL does enter the sub $5 range.

With a trade, in most cases, we’re going to put the entire trade on at once. I may break the position up into two lots, and start off with deploying just 50% of the capital I want to devote to the trade.

Quick note: I’m not advocating this AAL trade, I haven’t researched it in depth and not one I plan to take. I’m just using it as an example.

The difference is with trading, we NEVER add to a losing position. When? NEVER. We NEVER do it. If we put this trade on now with AAL at 10.3 and come June, the price of AAL moves to 15, that is a clear indication that our thesis is wrong. That’s as clear as it gets – the trade isn’t working.

And I’m not going to add to my losing position to “average down”. We NEVER, NEVER, EVER add to a losing trade. NEVER. This is how most traders go broke. In fact, I would say adding to losing trades is the number one reason why traders go bust or sustain huge loses that leave scars for years.

What are the exceptions to this rule? NONE. There are no exceptions. We never add to losing trades. NEVER.

I hope that clears up my view on adding to losing trades and deploying capital in investments. Averaging down is perfectly acceptable with investments.

It is NEVER acceptable with trading. NEVER NEVER EVEEEEERRRRRRR.

The only time I’ll add to a trade is if the trade is moving in my favor and my initial risk is off the table. If AAL moved to 7.50, I’d consider adding more to the position.

The Golden Rule of Risk

The second most common way new and old traders alike blow up their accounts is the Golden Rule of Risk.

With the current trading environment, there tons of new players coming into the game. It reminds of 2018 when some of my fav YouTube Crypto chodes were the rage, such as the Crypto Oracle. Who was living in his parents basement and rolling to his part time job at Cinnabun in his Range Rover, while spouting his HAWT crypto trade of the week in some shit coin.

Some new players come into this game and have immediate success with their first few trades. They have no idea what they are doing, were taking WAY too much risk, get lucky and hit it out of the park. Good for them!! The correct move is to concede you don’t have a clue what you’re doing, there was a high degree of luck involved, take your chips off the table and move along.

Or decide to educate yourself and take your chops to the next level.

Instead, most have an inflated ego and think they are naturals at trading, they just have “an unusual,  rare, talent for trading.” They are “good at this.” They continue with their I-don’t-have-a-fucking-clue-as-to-what-I’m-doing ways and it’s not long before they level their account, often leaving a hole in ground. That results in a large negative balance in their trading account that they have to wire in just to bring it back to zero.

Friday it was Ronin Capital, a large prop firm which was over leveraged, couldn’t meet margin calls and was liquidated by the CME.

I’ve already heard first hand a few of these stories the past few weeks of individual traders getting wiped out. Within the next 6 months, chances are you will likely know someone this has happened to.

Which leads me to the Golden Rule of Risk. You’ve probably heard Mike and I mention this ad nauseam in our trainings and I’ll mention it again because the time couldn’t be more appropriate. The Gold Rule of Risk:

There is no doubt, in this market, if you get lucky, you’re going to get really lucky. And if you’re unlucky, you’re likely to get decimated. Odds favor the later. Be careful. If you don’t know what you’re doing, now is not the time to figure it out the hard way. It will be the really hard way.

Averaging Down And The Gold Rule of Risk

This is the vicious cycle.. The reason most people get caught in the vicious circle of averaging down a losing trade is they were taking too much risk to begin with. When they start taking loses, they freak out and start adding more to the losing trade.

A loss should never never freak you out in trading. It’s part of the game, if you’re risk was setup correctly, then it should be a small loss. Take the lump and move on.

Trading In This Environment

Be careful! Even as a long time trader, in these conditions I really have to double check everything I’m doing.

If you don’t have a clue as to what you’re doing, you’re going to get taken advantage of in this market. My professional peer traders and I are shooting fish in a barrel right now… It’s like fresh lambs to the slaughter and there seems to be an infinite supply of them.

One way that newbs are getting slaughtered right now is not using limit orders in illiquid options. The spreads are huge right now and many markets are illiquid. The best bid might be $.01 and the ask might be $9.00 on an option that has a theoretical value of $1.75. If you don’t use limit orders now, you will get massively taken advantage of.

Another area where I see newbs and intermediate traders getting leveled is by using theoretical option values in triple leveraged instruments like SPXS, UPRO or even the 1.5X UVXY. It’s near impossible to accurately price options when the implied volatility in these goes from 120% to 170% the next day.

Be careful! Use limit orders to get into all trades.

Conventional market rules with stop orders also need to be changed in this environment. Stop orders can be very dangerous in this type of environment, stop-limit orders are a safer play. When liquidity dries up, the national best bid can go to $.01. So if you’re long and have a stop order for $95 in a $100 stock like BA, it gets filled at $.01 and you’re screwed.

Similar situation with shorts, if you’re able to borrow.