If you are new to trading then you may be wondering what all those red candles mean you suddenly keep seeing all over the place. Well, let me tell you a tale of a long forgotten place and time when market corrections were a regular occurrence and served to prevent excessive greed and hubris to prolong for more than mere fleeting moments. The rare times it happened were feared by all but then quickly ignored and soon forgotten nonetheless. This cyclical ebb and flow of the financial markets worked well for a few centuries until one day back on September 15 of 2008 when the Federal Reserve decided that market corrections were a thing of the past and thus henceforth were considered ‘verboten’.

The 14 years and long series of irresponsible and short term minded decisions that followed managed to propel the S&P 500 from a humble reading of $667 + change to the lofty heights of $4,819 – over 4,150 handles higher. 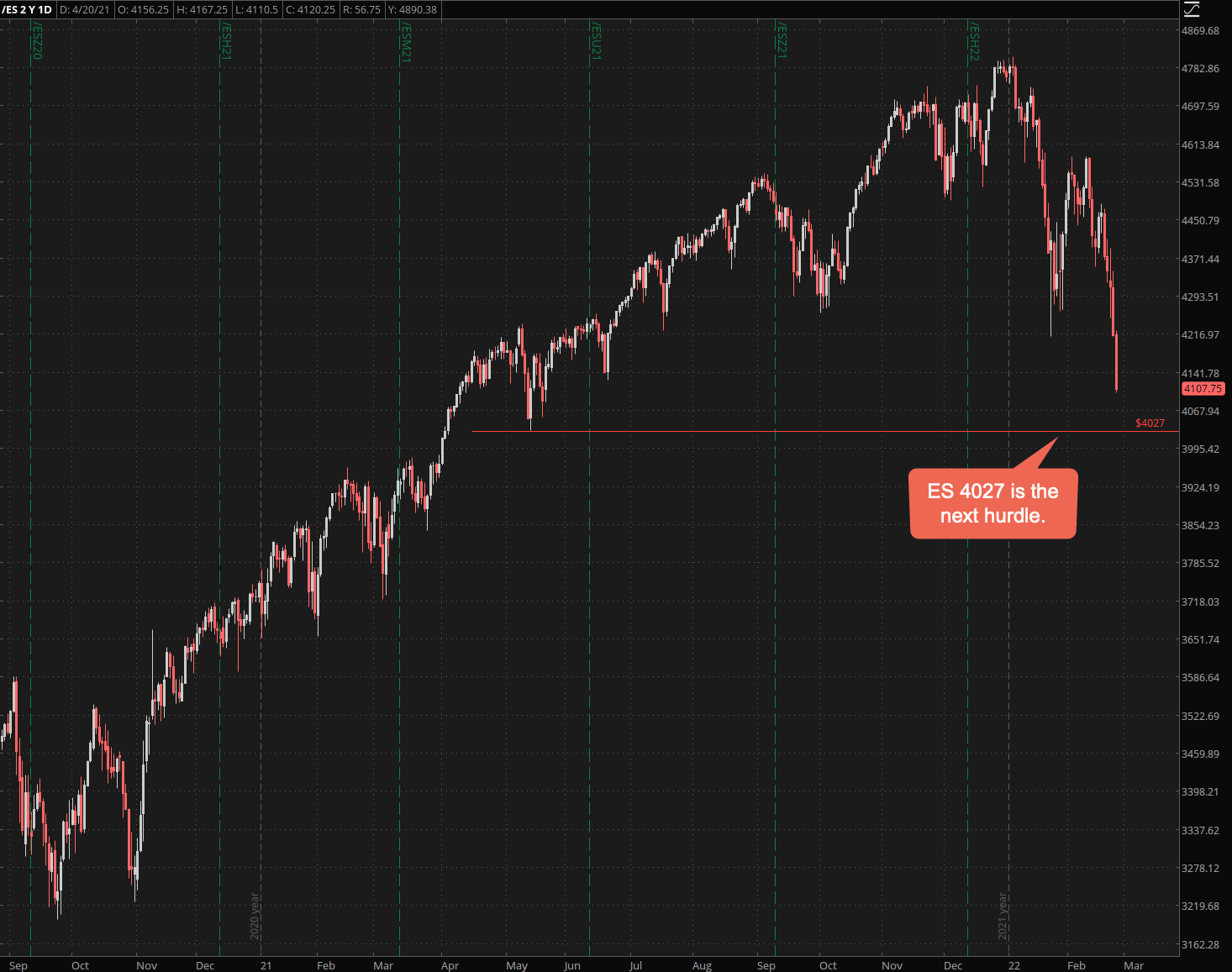 So it would have been easy to assume that the prospect of yet another war plus a bit more money printing should have propelled us to even higher highs somewhere near the 6,000 region. But suddenly there seems to be trouble in paradise as the market appears to be slowly dragged downwards by the weight of its own hubris.

The ES futures are already heading toward the next hurdle on the way down which I’ve pinned at around ES 4,027. There isn’t really much there to hang our hats on as over a year of bullish exuberance failed to produce sufficient technical context that would serve as support on the way down. 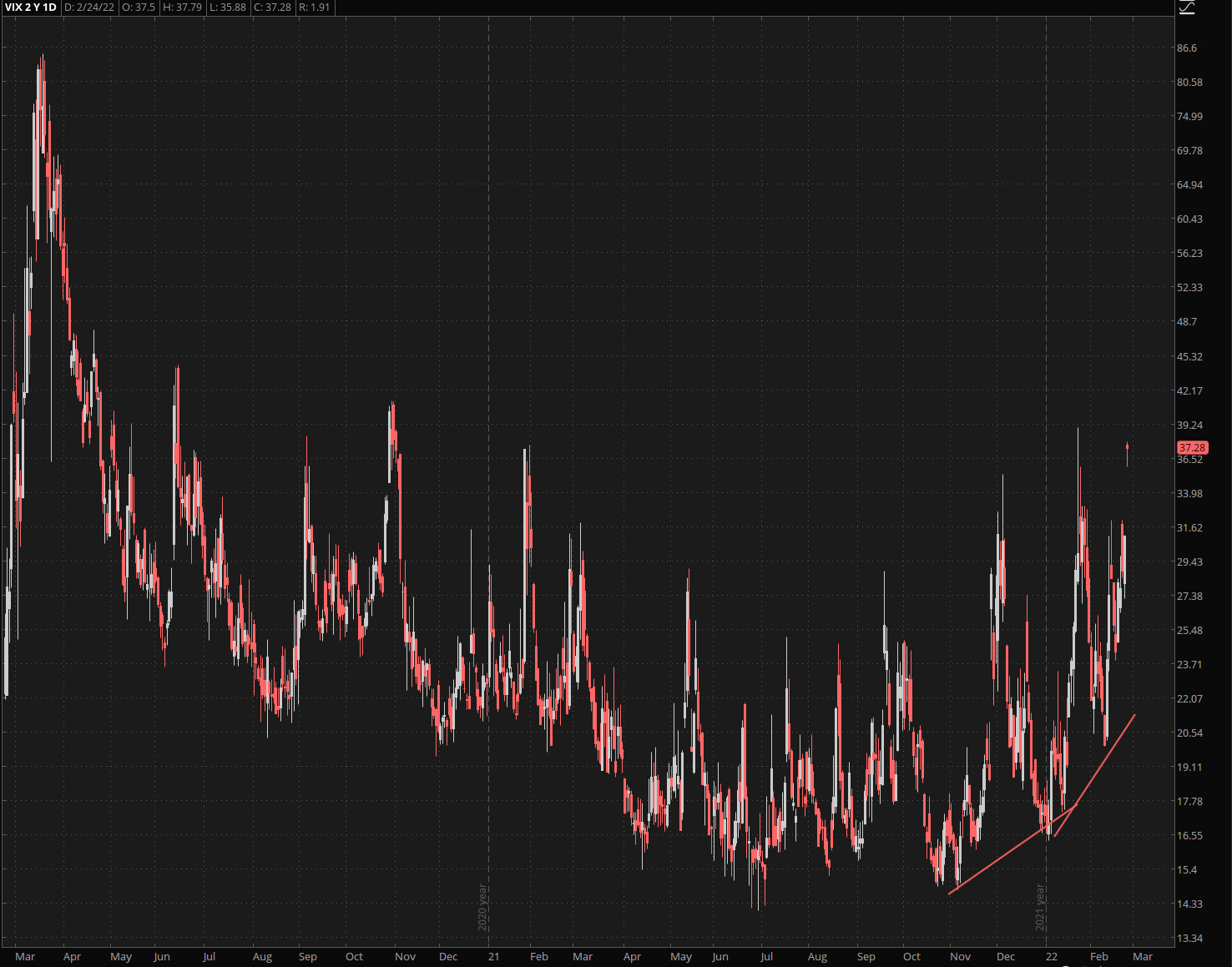 The VIX is expected to open in the upper 30s and that’s going to spike options premiums to a large degree.

The curve on the bottom marks the state of the market when I decided that it was finally time to hedge myself (and my subs) from what probably laid ahead. Since we are mainly options traders here at RPQ a jump in IV of over 8% certainly puts tears of joy in our eyes. 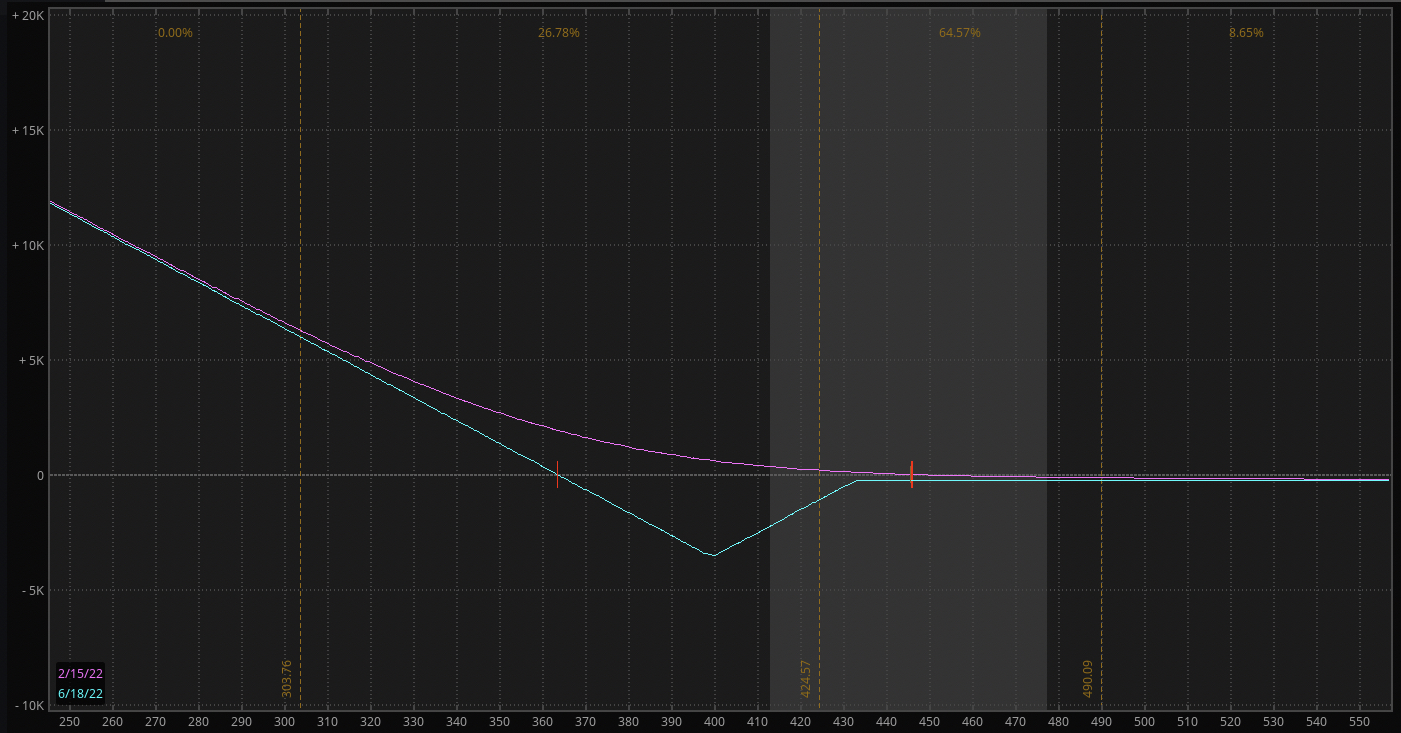 Of course if you had paid attention to my writings here then you saw this train wreck coming from a mile away.  Since I usually follow my own advice I recommended all my subs to load up on what I call my ‘CYA’ spread. It works similarly to a naked put but is a lot less sensitive to theta burn (i.e. time decay).

It’s already more than making up for any of my long positions and as you can tell from the profit graph – it’s just getting warmed up. Once we hit the bearish inflection point of SPX 3860 it’s going to print more ill-gotten coin than a Fed printing press. 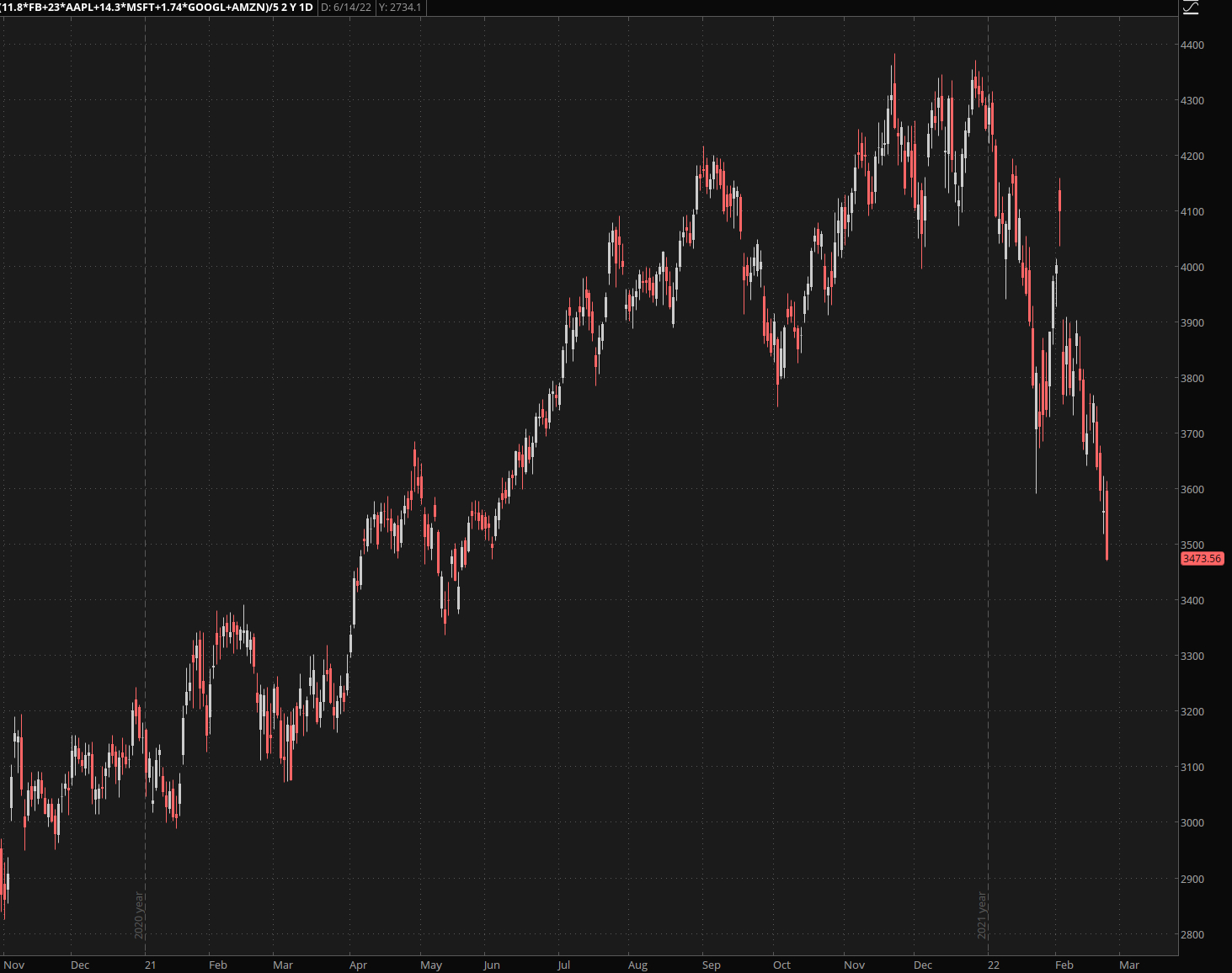 What is getting particularly hit hard are tech stocks – here’s my ‘monsters of tech’ synthetic index and it’s just looking UGLY. 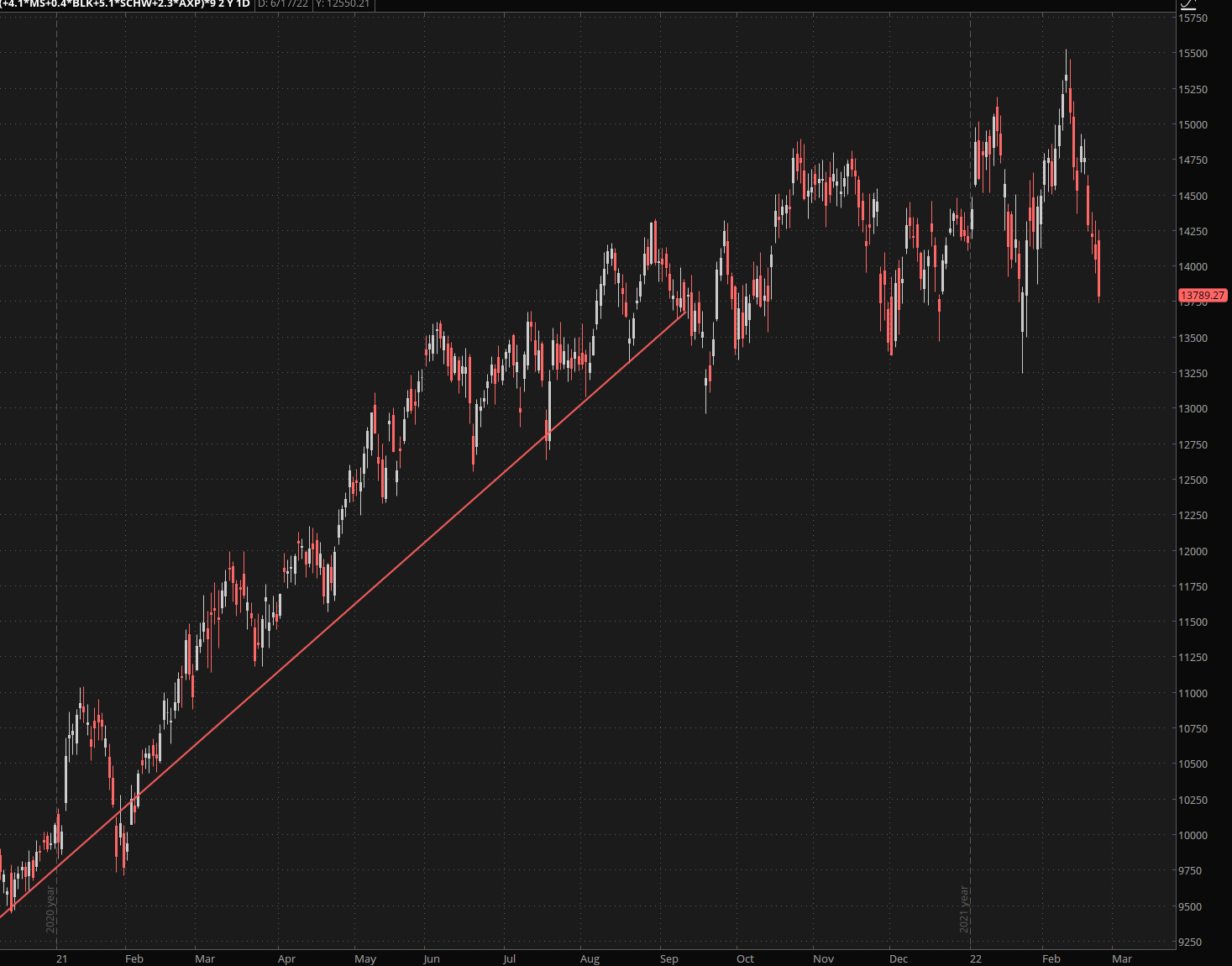 Compare that with big finance and things look outright tranquil – I guess the mistaken notion of higher interest rates seems to still be circulating. 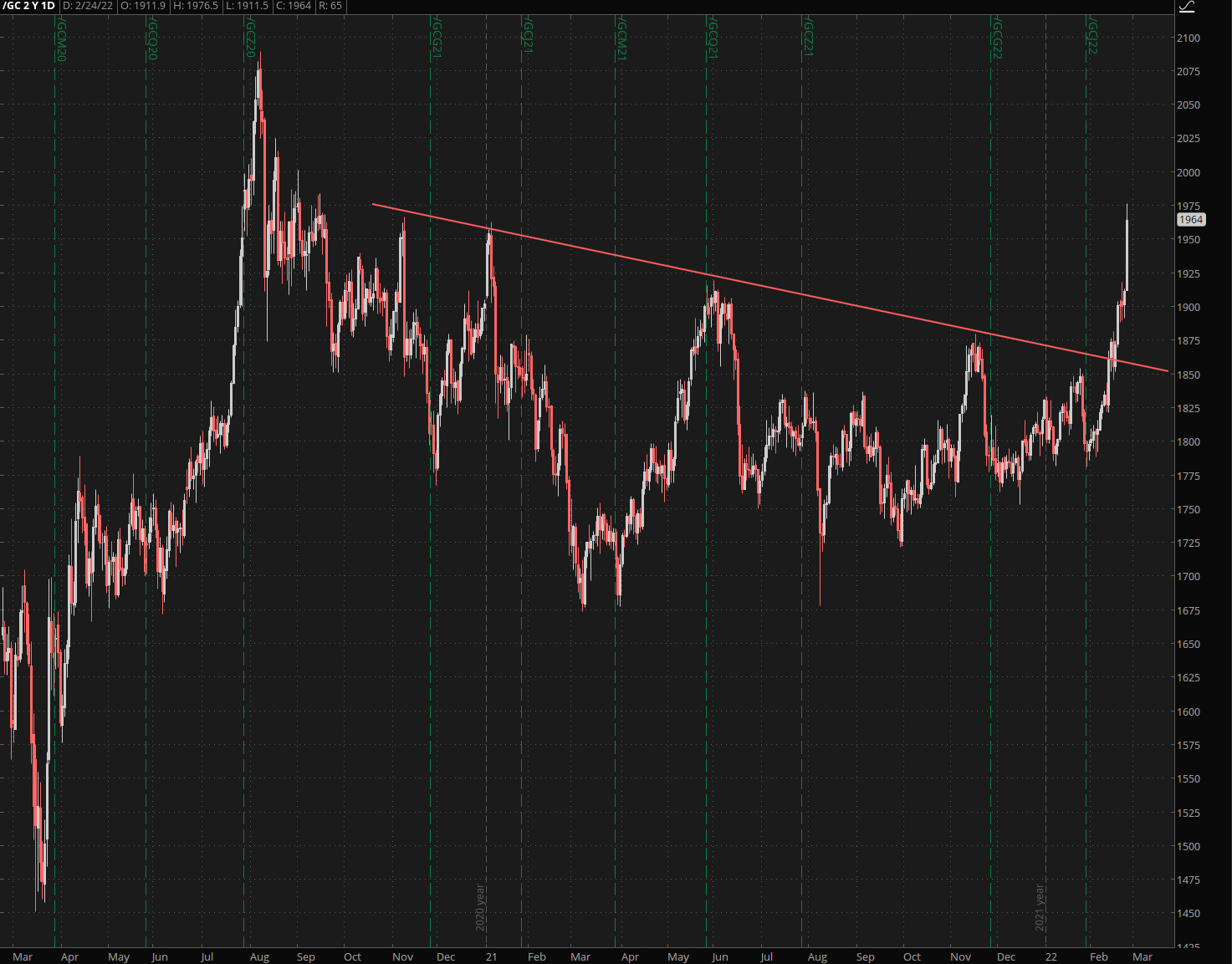 Big props to the gold bugs who are finally getting their day in the sun after suffering through a decade of humiliation. Run Forest ruuunnn!!!

Bonds are exploding higher after having tested LT support. 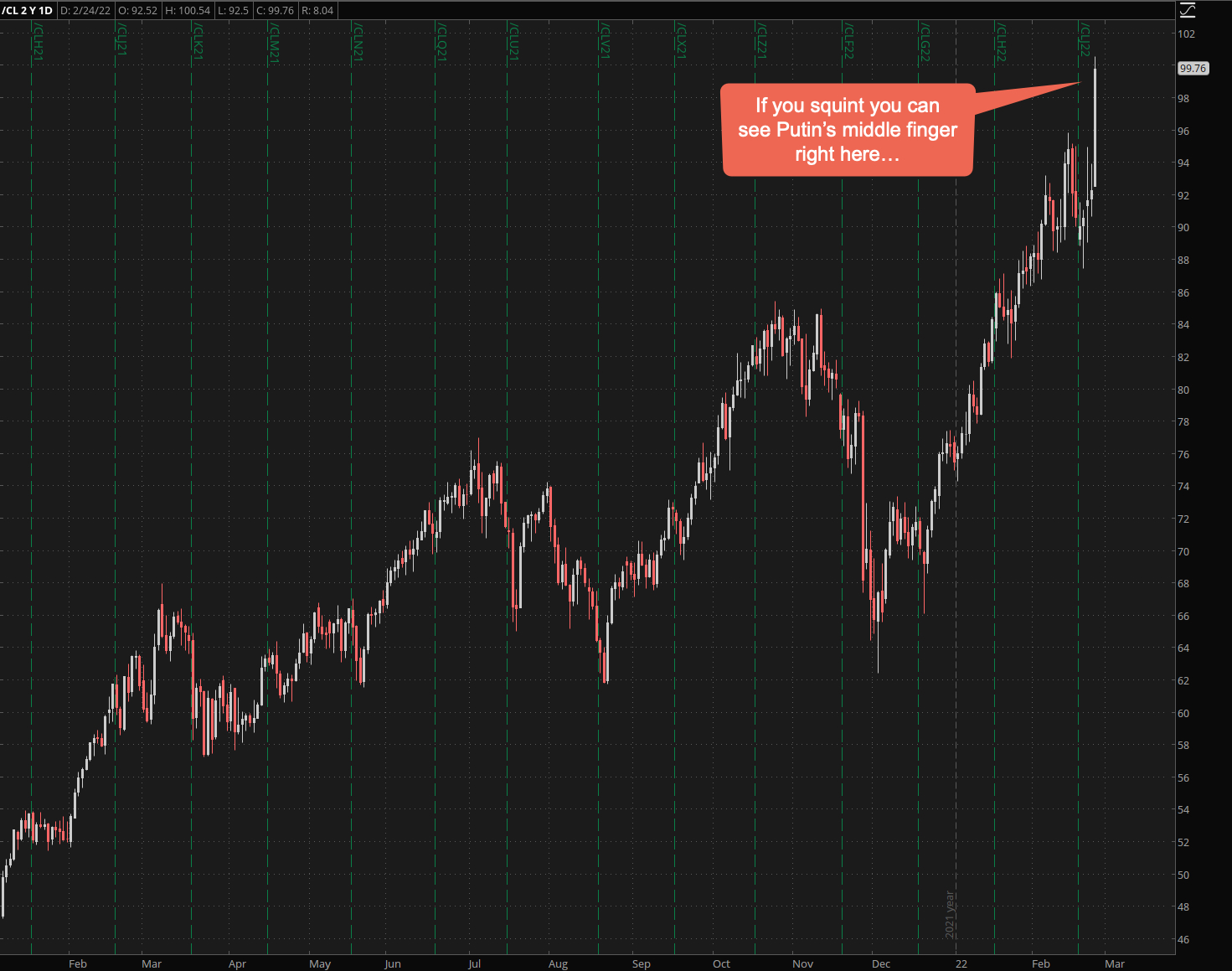 Last but not least Vlad’s favorite chart today. If you can squint you can see his middle finger pointing the way. A friend of mine asked me the other day how much I’m paying for gasoline. After converting liters to gallons and that price to dollars it came out to a whopping $7.15 – so if you think you’ve got it bad over in the U.S. then let me tell you: You ain’t seen nothin’ yet…

Happy trading but keep it frosty.