Stuck In The Mud

The crypto sector is clearly attempting to produce a long term floor, which is evidenced by the series of higher highs and higher lows we’ve seen on both BTC and ETH. However there’s a problem and it’s a pretty glaring one. Both are distinct lagging behind the bounce in equities: 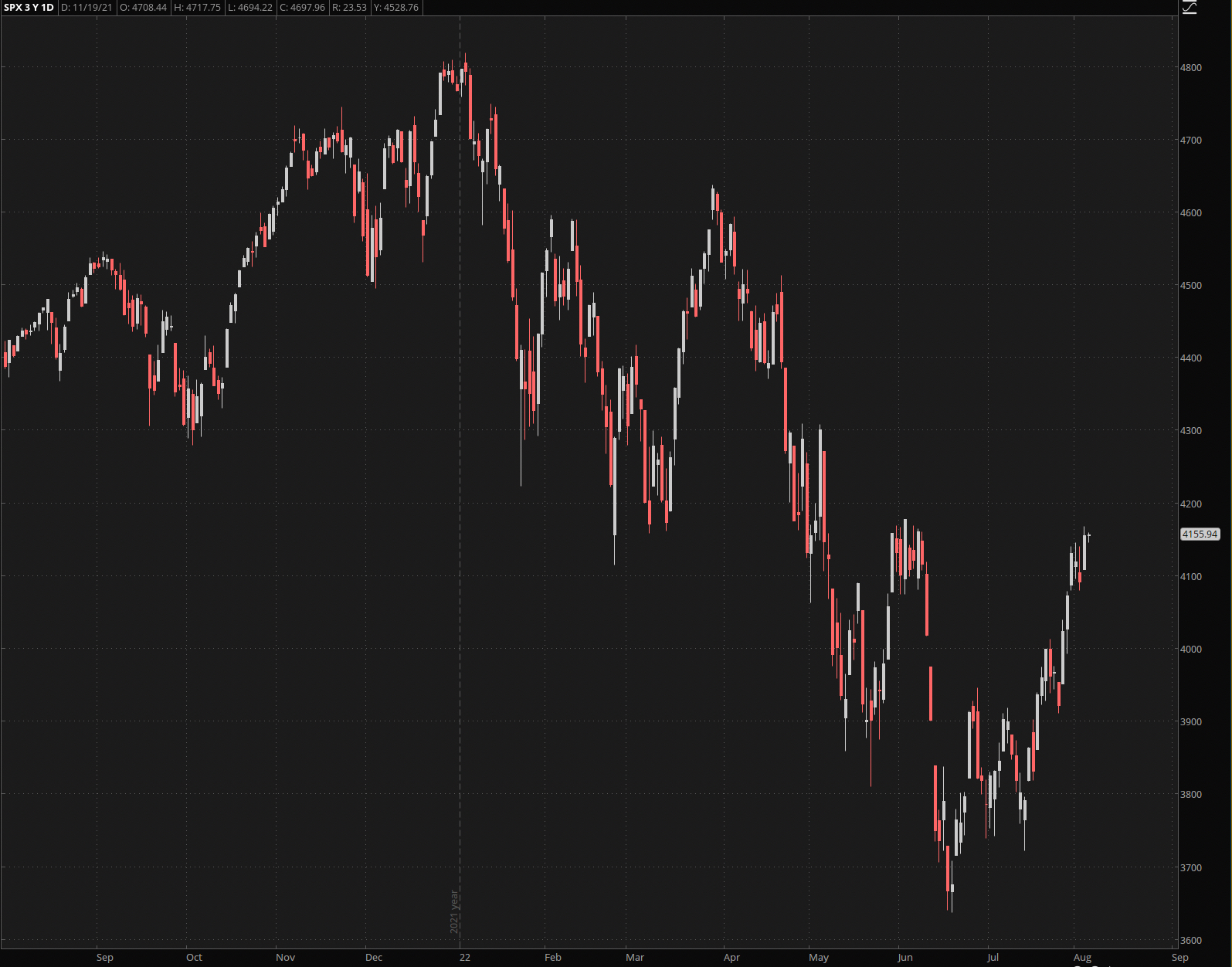 That’s a 500 handle jump right in a matter of three weeks. A massive short squeeze that has a many bears reach for an extra helping of vaseline. 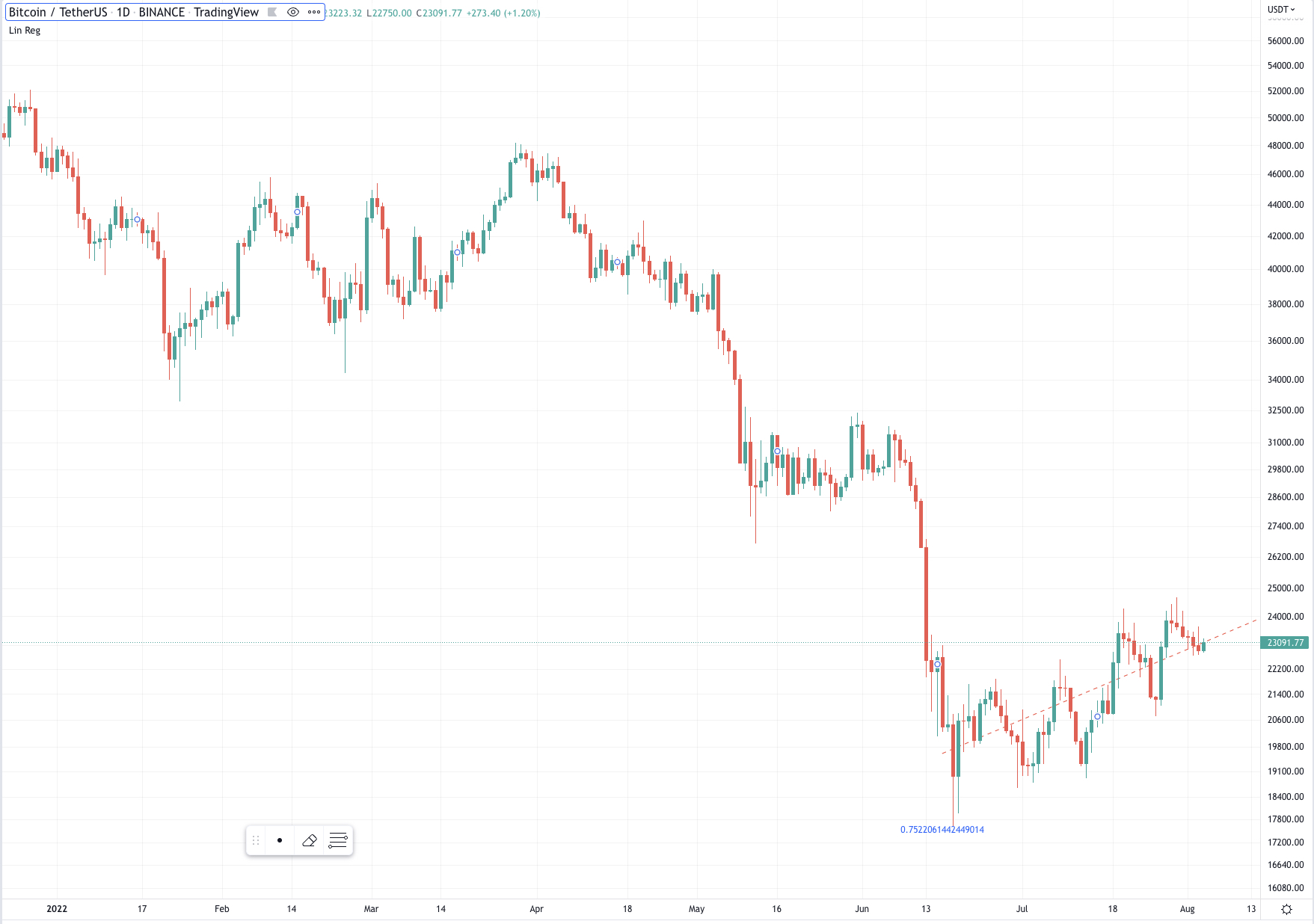 Now compare that with the advance in bitcoin. Outright measly, especially given the scope of the preceding sell-off which brought us from over 65,000 to as low as 17,800. 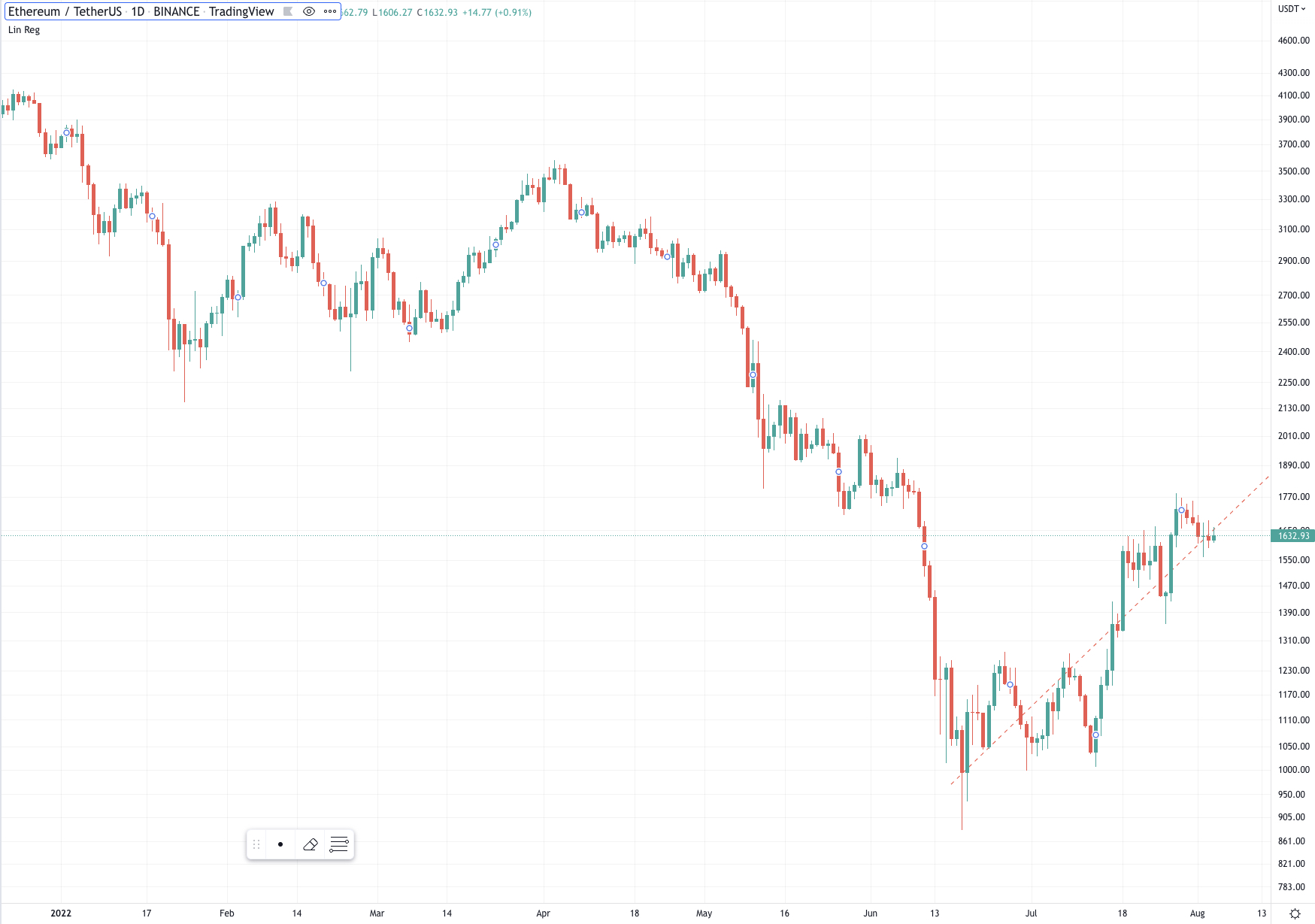 Ethereum is leading bitcoin but still cannot hold a candle to the short squeeze the stock bulls are currently enjoying. 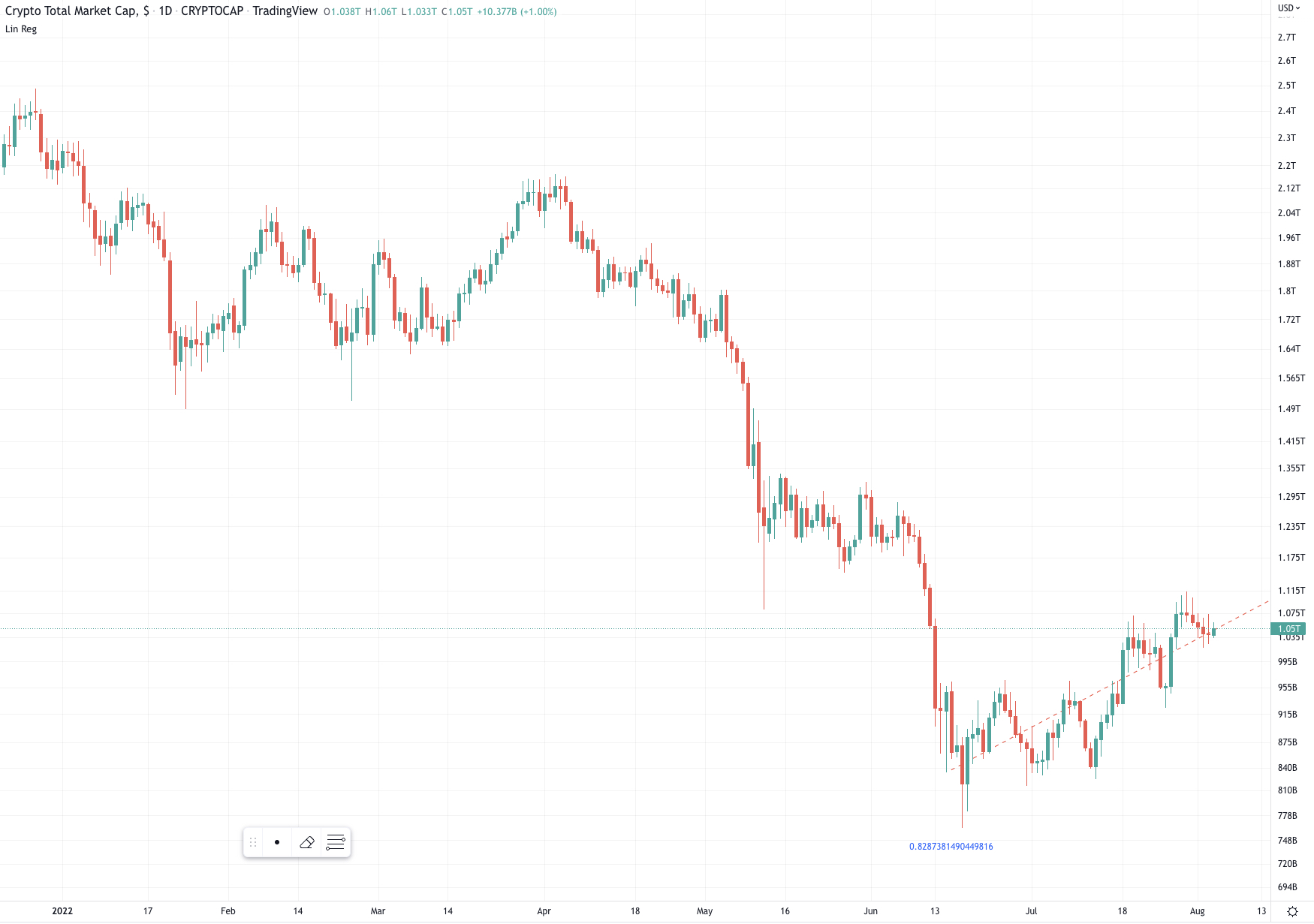 This is basically the standard & poor of the entire crypto market – you’ll find it in tradingview under the symbol TOTAL. It’s a textbook advance for sure but frankly speaking this thing ought to be ripping at this point.

You see, for months and months the stock market and the crypto market had been moving in lockstep. And not just that – for every handle the SPX lost bitcoin and co. ended up losing at least two. So you’d think it would be ahead of the game on the way up?

What we can conclude from this is fairly straightforward:

What does all this mean?

Most likely the final shoe in crypto has not dropped yet and it’s quite possible there’s more pain just around the corner, most likely right after the summer.

The stock market as a whole is hugely mistaken in its anticipation of Powell bringing back the splendor of free infinite money. There’s more going on than meets the eye here and some is highly politically motivated, both domestically as well as geo-strategically. Game of thrones comes to mind.

Suffice it to say that the end of the Petro-Dollar is not on the Fed’s road-map. A much weakened Euro and by extension a dependent Eurozone however is.

So what should we do?

Simple, in a fragile and increasingly chaotic world (and market) your foremost endeavor should be to become anti-fragile. Good luck trying to guess which way the market may swing next.

May I suggest a much simpler way… 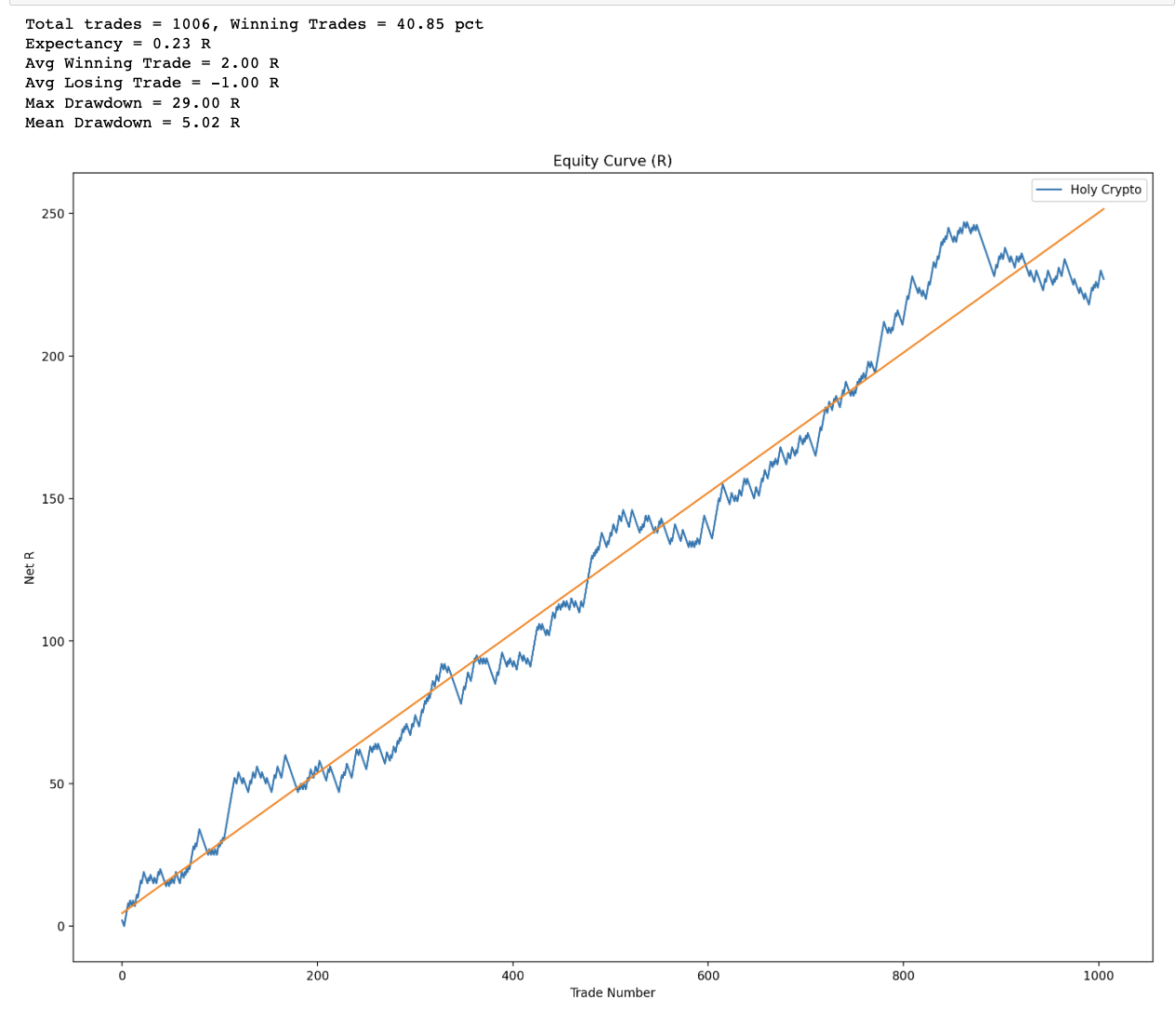 Here’s the equity curve for the new Crypto Salary Swing Trading System (CSTS) I’ve been working on over the past few months. 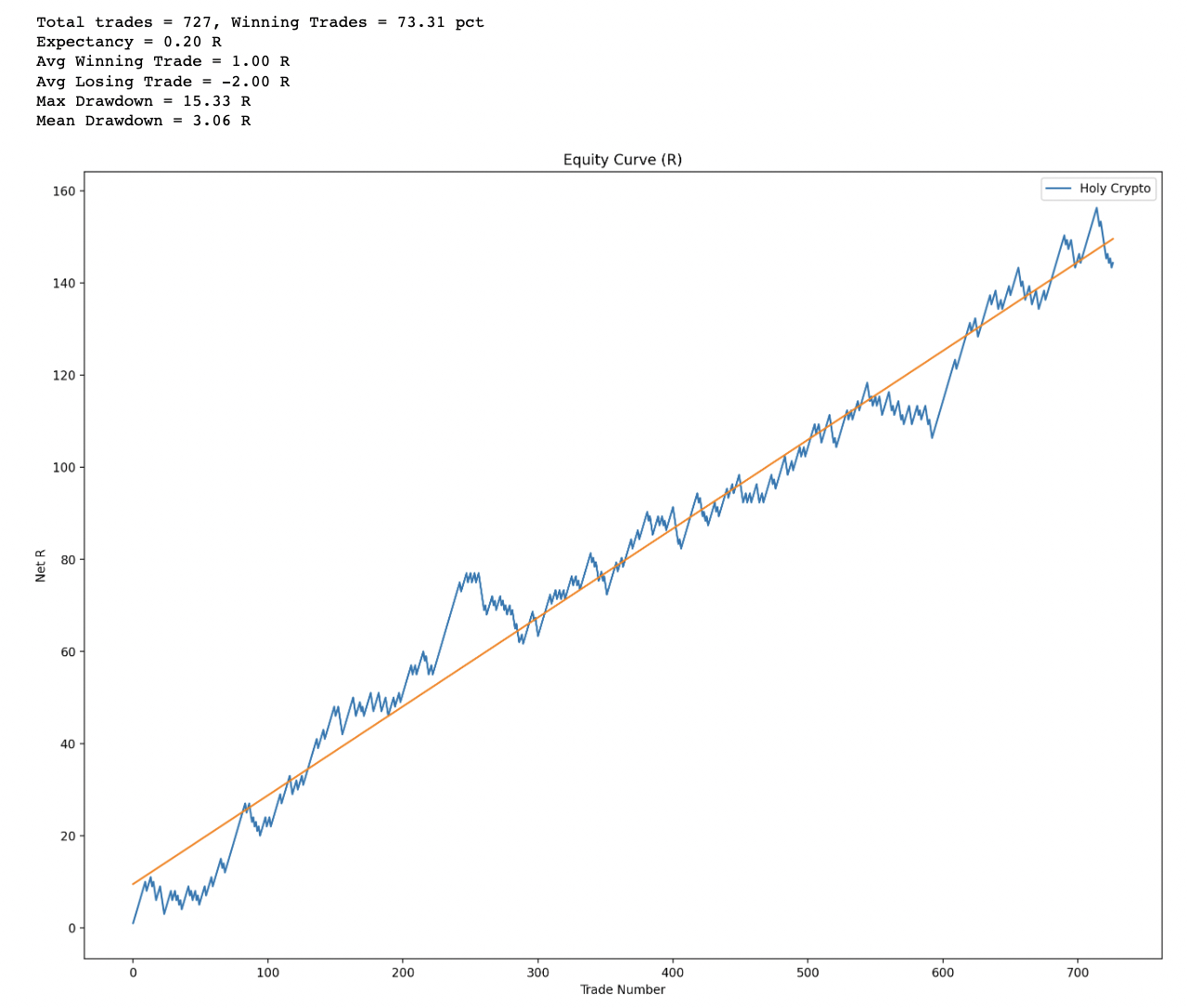 It’s actually two systems in one – the first takes mean reversion entries and the second goes the opposite way. Both taken together have been extremely consistent over the course of the past 18 months.

We are currently training a select group of beta-testers (sorry admission is closed) in order to vet the system and prepare it for launch in early September.