Something pretty interesting happened over the weekend as I was cruising Airbnb for potential weekend get-aways here on the Iberian Peninsula. Since I’ve always been a stingy bastard I’m not ashamed to admit that I was pretty perplexed by the exorbitant prices that I simply couldn’t square with the glaring lack of demand in tourism Spain currently is experiencing. Part of that of course is due to recurring and erratic COVID-19 lock downs and various other entry restrictions here in Europe. But some of it is also purely self-inflicted as excessive price gouging over the past years already started to be a topic of contention among visitors back in 2019.

However that’s not the interesting part just yet. What I found extremely puzzling was the fact that almost all of the places I was considering were available for at least a month or two out. At first I had naively imagined that we should be able to snap up a juicy deal given that the vast majority of active tourism in Spain right now is domestic, meaning Spaniards (who on average earn a lot less than their Northern Europeans neighbors) traveling inside of Spain.

Boy, was I in for a rude awakening. Anything I would consider borderline acceptable started at around €150/night (~$180), which is actually higher than the average price I observed in the past year or two. So just out of curiosity I began to expand my search window from a few days to a full month, which I believe is the limit for Airbnb.

Sure enough most of those same properties were wide open and available to be rented, clearly suggesting that overall demand was not in line with the pricing. In other words, for whatever reason property owners here in Spain continue to cling to high rental fees despite the fact that very few if anyone is taking them up on their offer.

Clinging To The Rosy Past?

I have often talked about human psychology and cognitive biases which have become an avid interest of mine since I started to trade and write about trading for a living over twelve years ago. So it’s not exactly a new topic for me, and neither are the laundry list of behavioral biases I encounter on an ongoing basis, in trading of course but also in real life.

But I have to concede that pertinent observations never cease to surprise me, especially when they are so glaring. Here we have a country that is clearly heading straight into a decade long economic recession, perhaps bordering a generational depression with mass unemployment as well as demographic, political, and civic upheaval.

Nevertheless it seems that, at least in the eyes of the average Spanish Airbnb host, it’s business as usual in expectation of holiday suckers abound willing to plunk down top Dollar – or in this case top Euro – for what I would consider rather average looking, badly maintained, and poorly furnished rental properties without amenities or WiFi access.

The three mental hangups that come to mind – and which I have talked about repeatedly here over the past years are:

Clearly all three apply here to some extend and I only elected ‘herding bias’ as the theme since it made for the best featured image. Spaniards in particular are famous for being rather stubborn and non-entrepreneurial to a fault. I for one have been pushed out of a store right at closing time right here in Valencia, only to see the same place close its doors for good a few weeks later. Many insightful articles have been written about this strange phenomenon – by expat Spaniards mind you – and it often seems to me that the average Spaniard seems to be impervious to the economic realities of supply and demand.

I would actually be interested to hear how 2020 has affected real estate as well as rental prices (short or long term) in your own locality. Are property owners and hosts adjusting to this new reality or are they desperately, and perhaps foolishly, clinging to the good times that seem to have disappeared into the distant past at the onset of 2020? 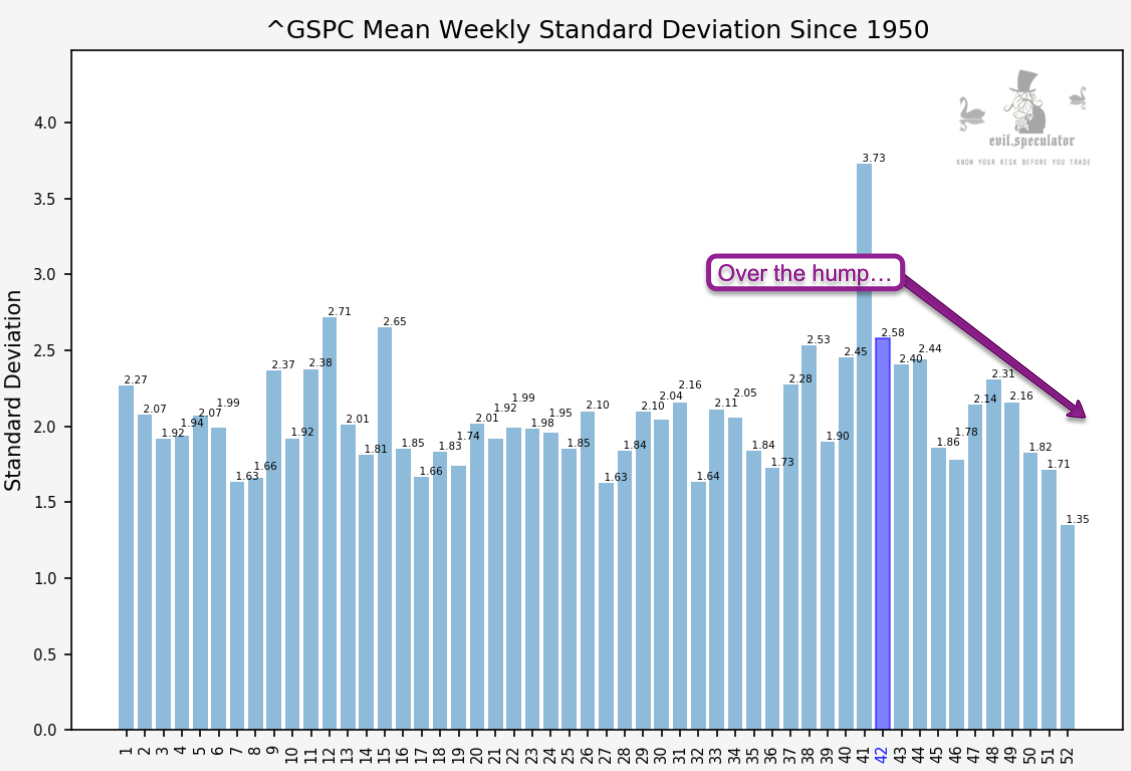 Alright, let’s get to the weekly stats. At least when it comes standard deviation (which I explained in detail last Monday) we seem to be rolling over the hump now. For me week #42 always signals the beginning of the last quarter with the coveted Santa earnings season slowly peaking over the horizon. Of course it’s 2020 so anything may happen before and right after November 3rd. 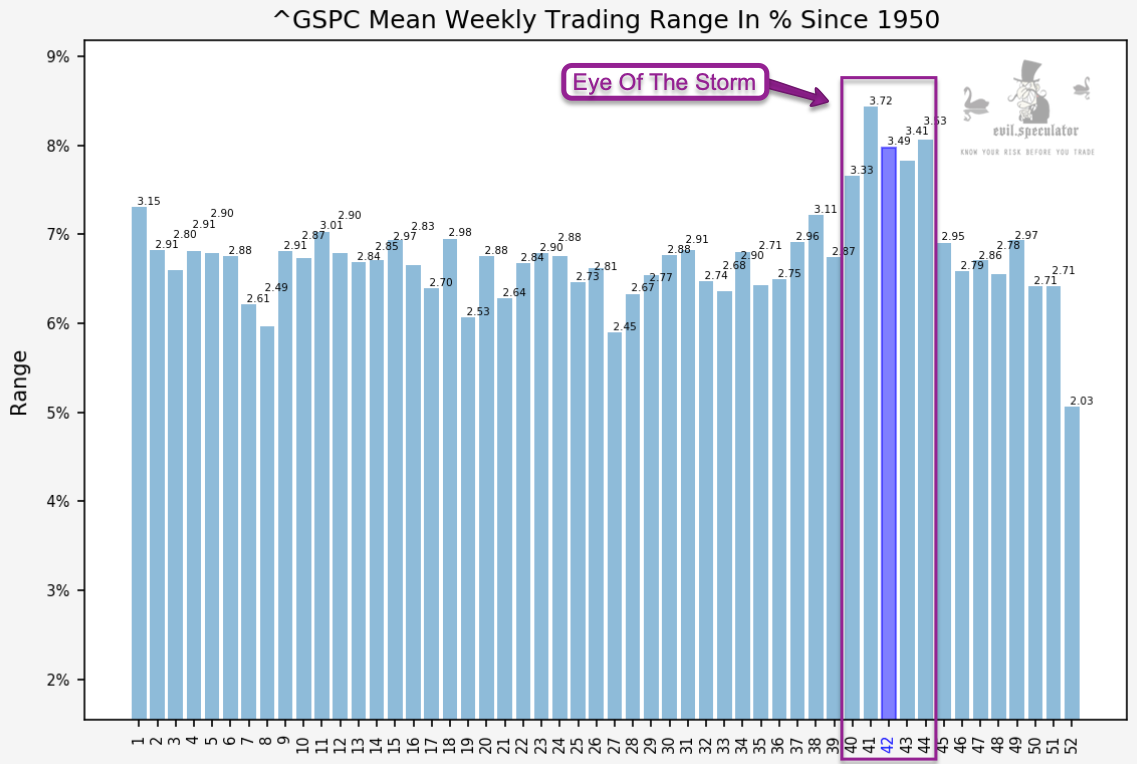 When it comes to the trading range (on a percent basis) we however seem to be in the eye of the annual storm. If I count correctly the presidential elections are scheduled for week #45, so I don’t expect that one to be anywhere near 2.95, but much higher.

More fascinating stats and market analysis waiting below the fold for my intrepid subs: