After half a century of economic expansion the prospect of recession is once again rearing its ugly head, except this time around it promises to be unlike anything any contemporary has ever experienced before. Back in the 1970s we at least had the benefit of great music, fun movies, and top notch comedy with which to console ourselves whilst waiting in line at the gas station. This time around we’re also being treated to food shortages and the growing possibility of WW3 involving Russia and China. Interesting times indeed! 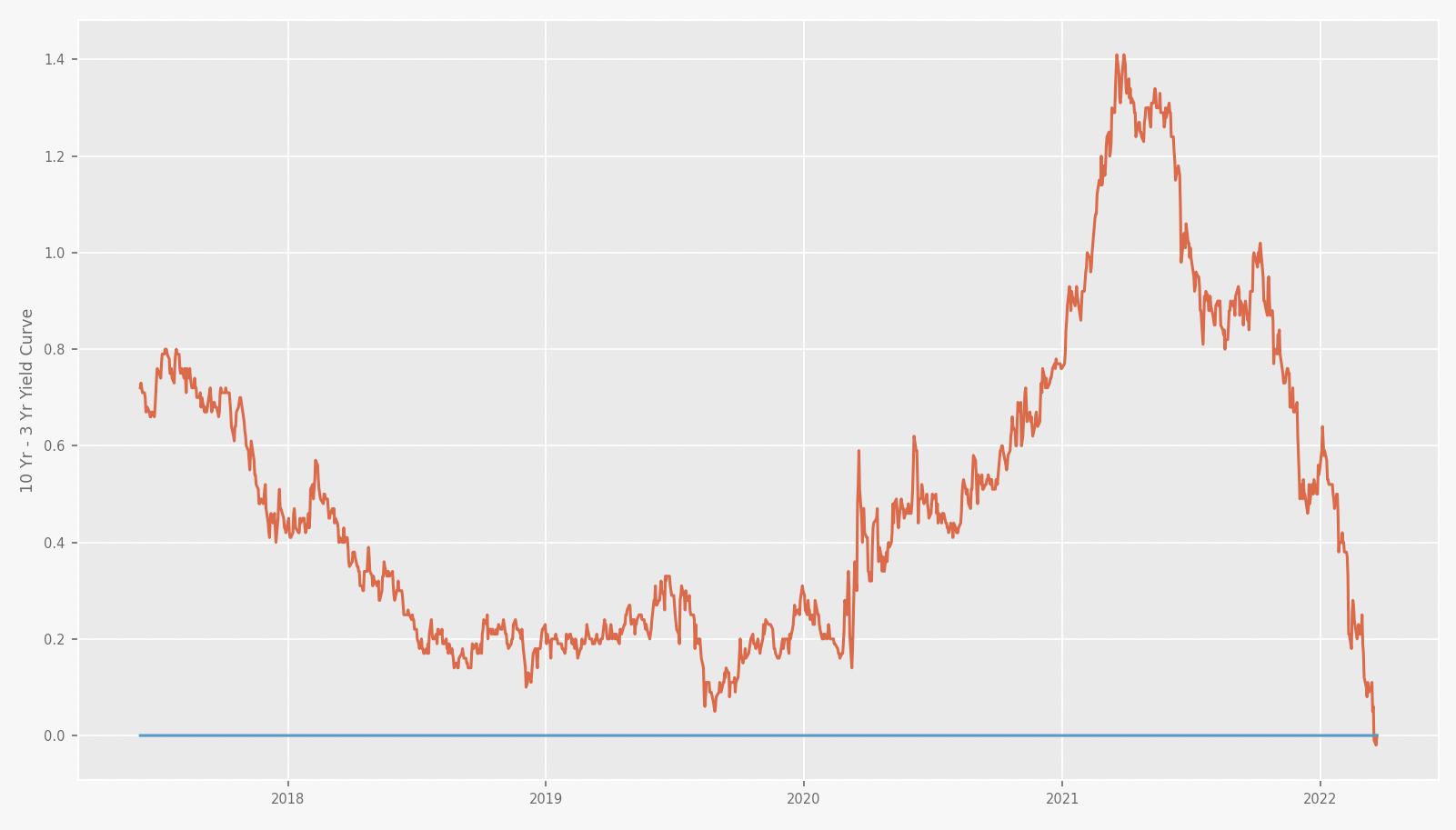 Now I’m not usually one to fall prey to excessive doom and gloom but what I am currently seeing unfold inside the mirky depths of the U.S. treasury market is giving me grave concerns. Specifically I am referring to the process of inversion of yields across the board.

Above I have plotted the 10-year yields minus the 3-year yields – as you can see it just dipped into negative territory. I’m no macro-economist but an inverted yield curve is widely recognized as an early harbinger of a deep recession, or given what we just came out of an outright depression. 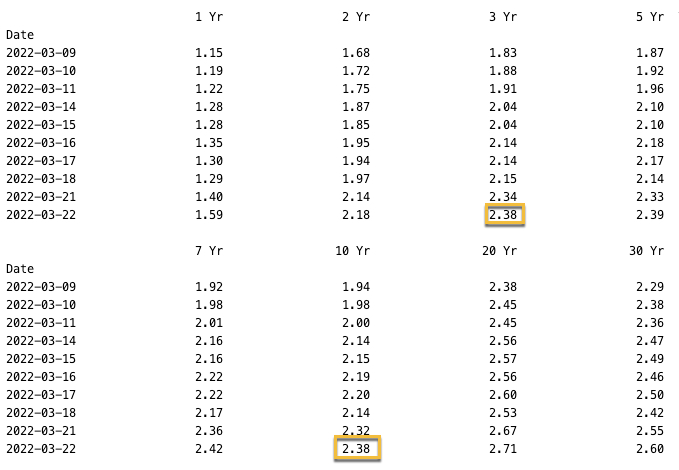 Here’s a bit more data from my plot that drives this home. 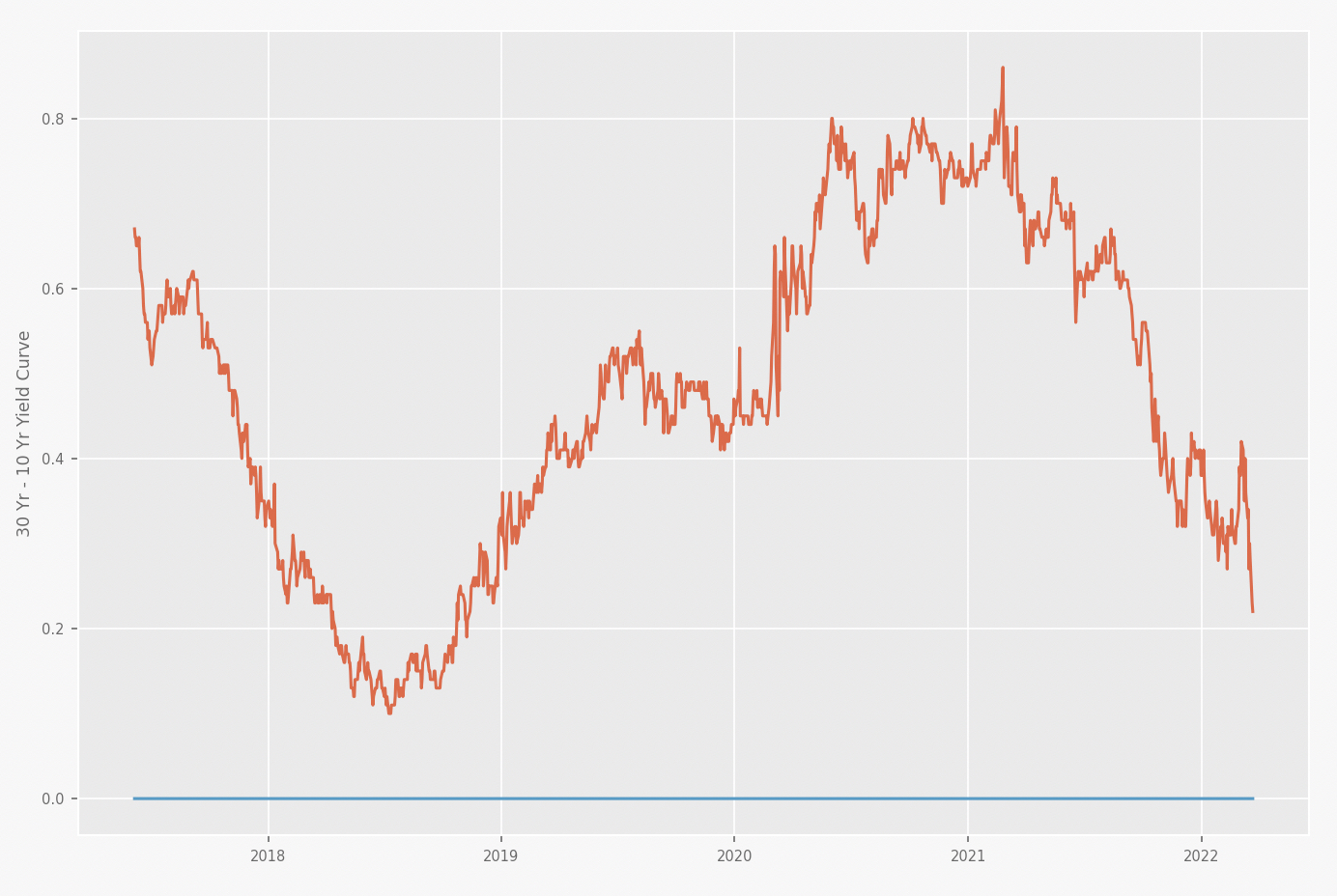 It really doesn’t matter if you measure the 10-year against the 30-year yields (which have no yet inverted) – what matters is the overall picture and it’s looking BEARISH. 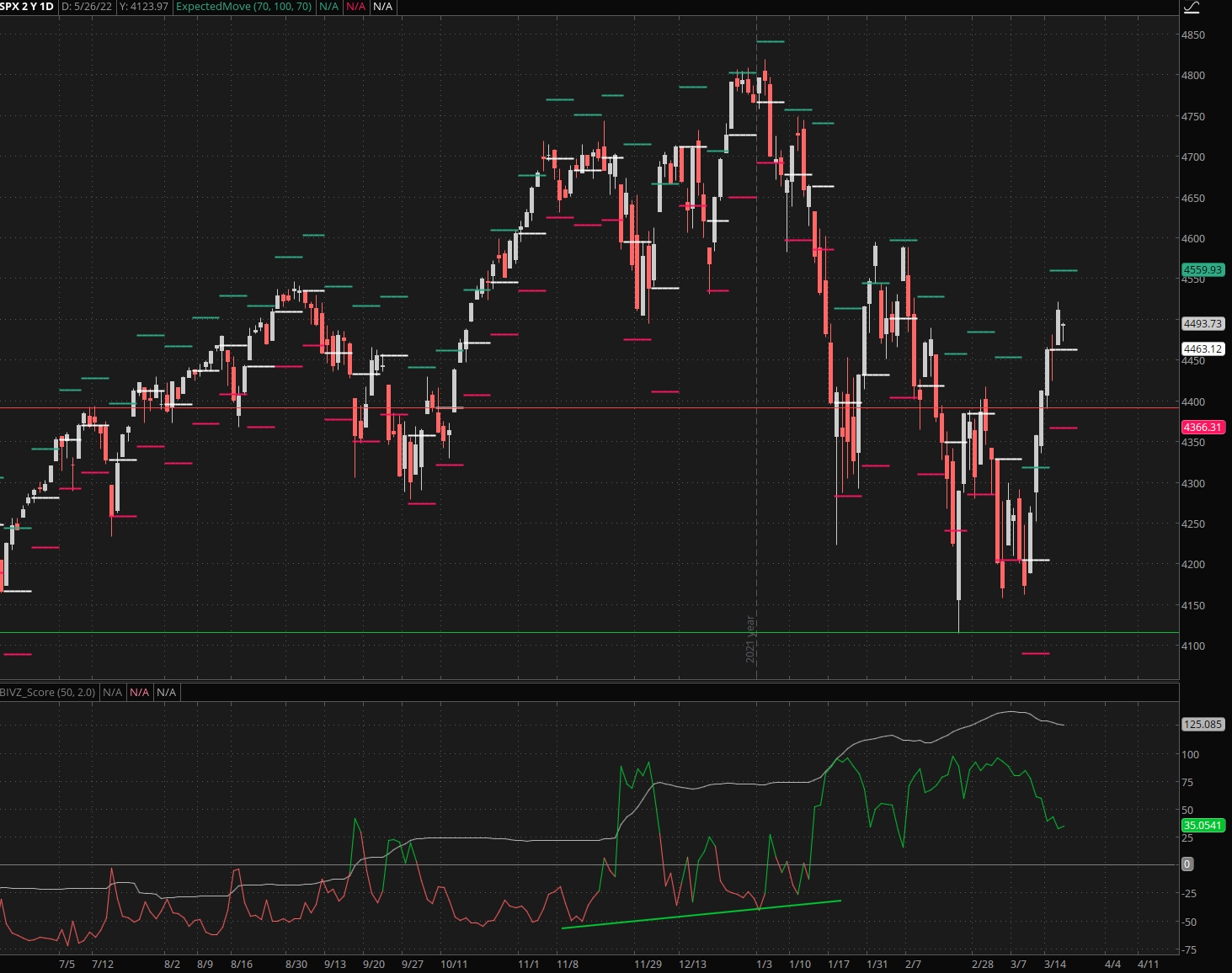 Of course nothing in the financial markets every moves in a straight line and that spells double true if you throw our friends at the FOMC in the mix. Which did its best to salvage its already dinged reputation whilst signaling just enough dovishness to keep the equities market afloat. What this produced was a face-ripping short squeeze that exceeded last week’s expected move by nearly another standard deviation.

Not sure if this can be maintained until election season but frankly it doesn’t matter as the majority of voters don’t follow the stock market. What they follow very closely however is what they’re paying at the pump, at the grocery store, at the lumber yard, at the home depot, etc. etc. Given that consideration one wonders if any further upside in equities is going to be worth the downside come November, if you get my drift. 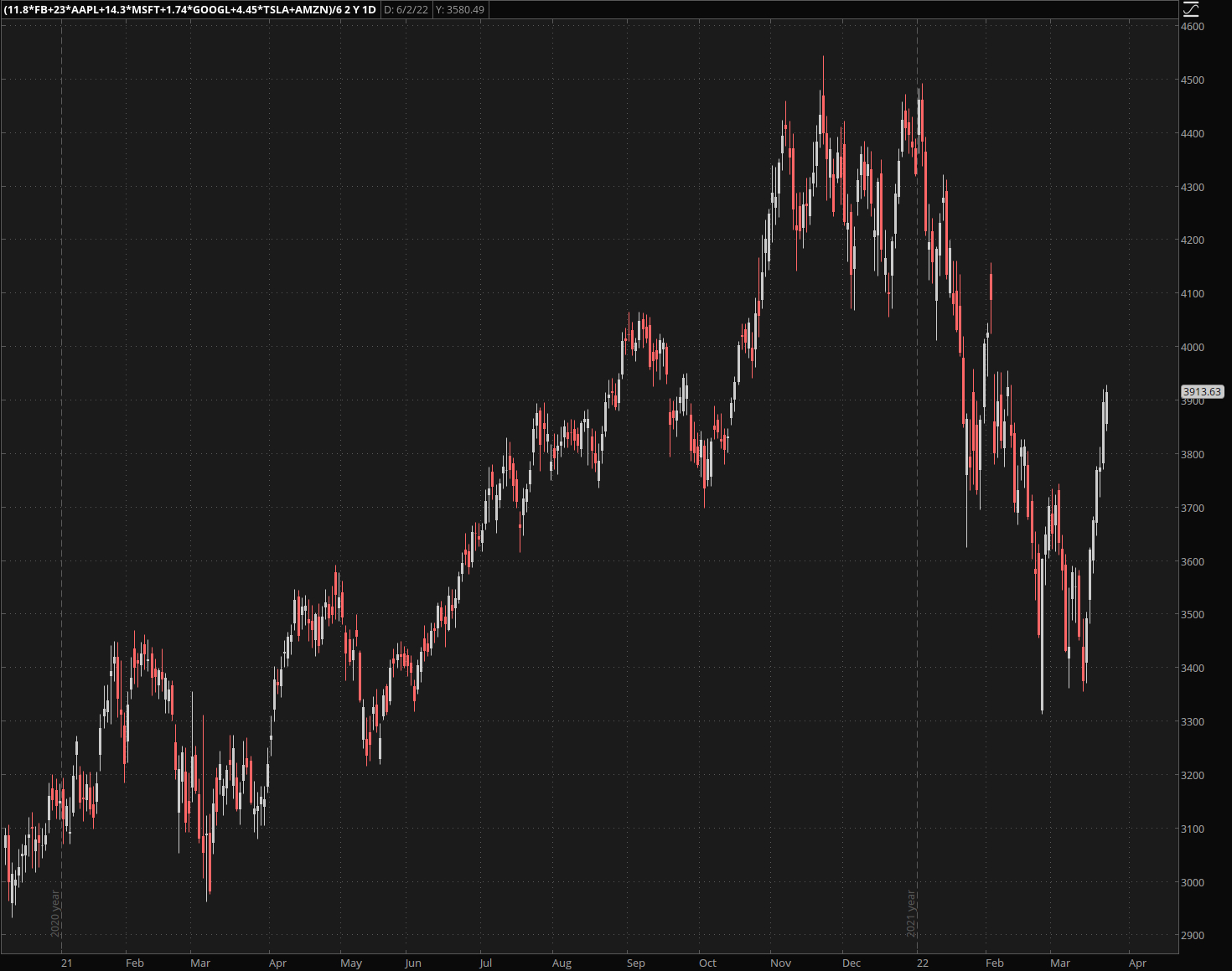 Big tech has been the main beneficiary of the current short squeeze, which should peter out very quickly should China be slapped with further sanctions and decide to throw another monkey wrench into an already frayed supply chain. It is here where I’ll be looking for possible candidates to short without compunction. Not right now of course – it’s always wise to let irrational exuberance have its day and take advantage once reality starts to sink in. 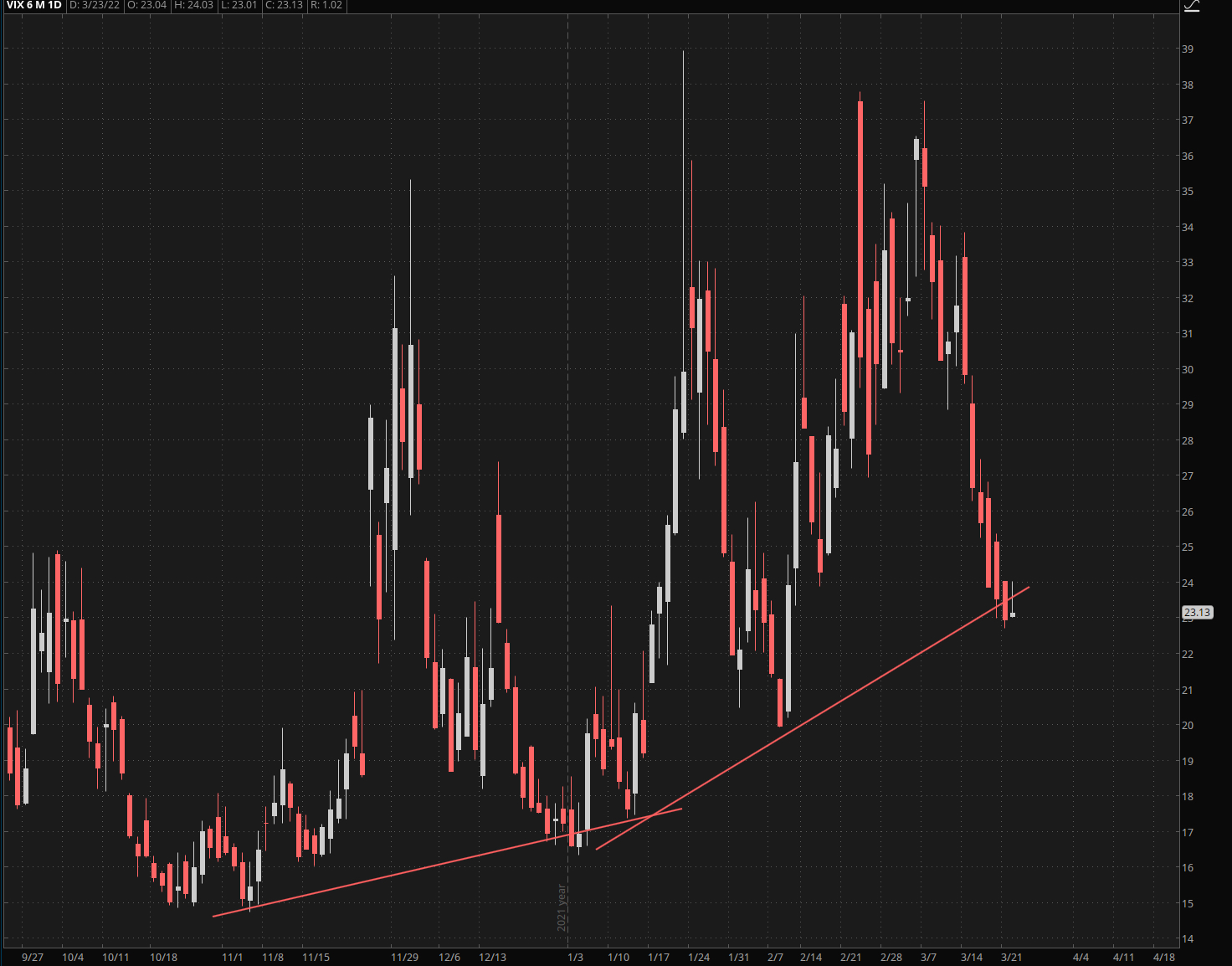 The VIX seems to be bottoming out where I thought it would. I’m going to give this another session or two but unless I see it descend into 22 or lower I will most likely start loading up on more of my notorious CYA spreads before Friday.

Reason being is what I’m seeing unfold on the IVTS – the implied volatility term structure: