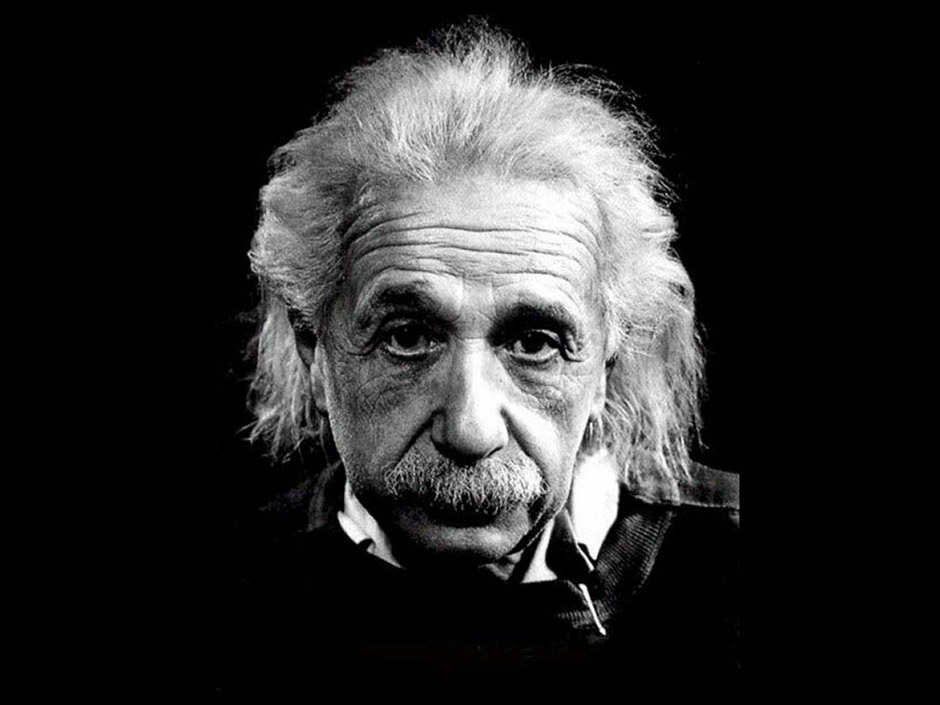 I often wonder whether or not Albert Einstein would have been a good trader, given his IQ of 160 and his ability to correlate seemingly mundane observations and twist them into a mind bending theory related to the inner workings of the universe. Odds have it that he most likely would have laughed at the question and balked at wasting his intellect at a silly endeavor such as predicting future price action.

The one thing Albert was absolutely spot on about were the numerous failings in human psychology, which he had no hesitation to point out with more than a hint of contempt for the human condition. My favorite expression, and one that has served me well to remember in my trading endeavors, remains to be: The definition of insanity is to keep doing the same thing over and over again expecting different results.

Which is a nice segue to the current situation in equities.If you ignore all the fancy lines and the IV indicator on the bottom what you see is a royal mess of candles without much of a direction trapping traders on both sides of the equation.

Nevertheless I still see a lot of people attempting to plot a real course here, and that during a time of historic economic, political, and cultural upheaval. I mean, I’ve been on this mortal coil for over half a century now and cannot recall a time when things were ever as unglued across the board as they are right now.

Given that the market has actually performed extremely well I must say. You may strike this up to incessant Fed printing combined with a healthy helping of hubris but whatever the reason. Things are relatively quiet and outright optimistic in the eyes of the average market participant.

Another theory is that everyone has started to believe their own bullshit, which seems to be a phenomenon not unique to the financial markets. Call me a cantankerous old cynic but even the pollyannas in my circles of friends don’t seem to understand the world anymore.

Anyway, my point here is that trading the hype higher while price is collaborating is one thing. But expecting and trading a directional market when there simply isn’t one is another. 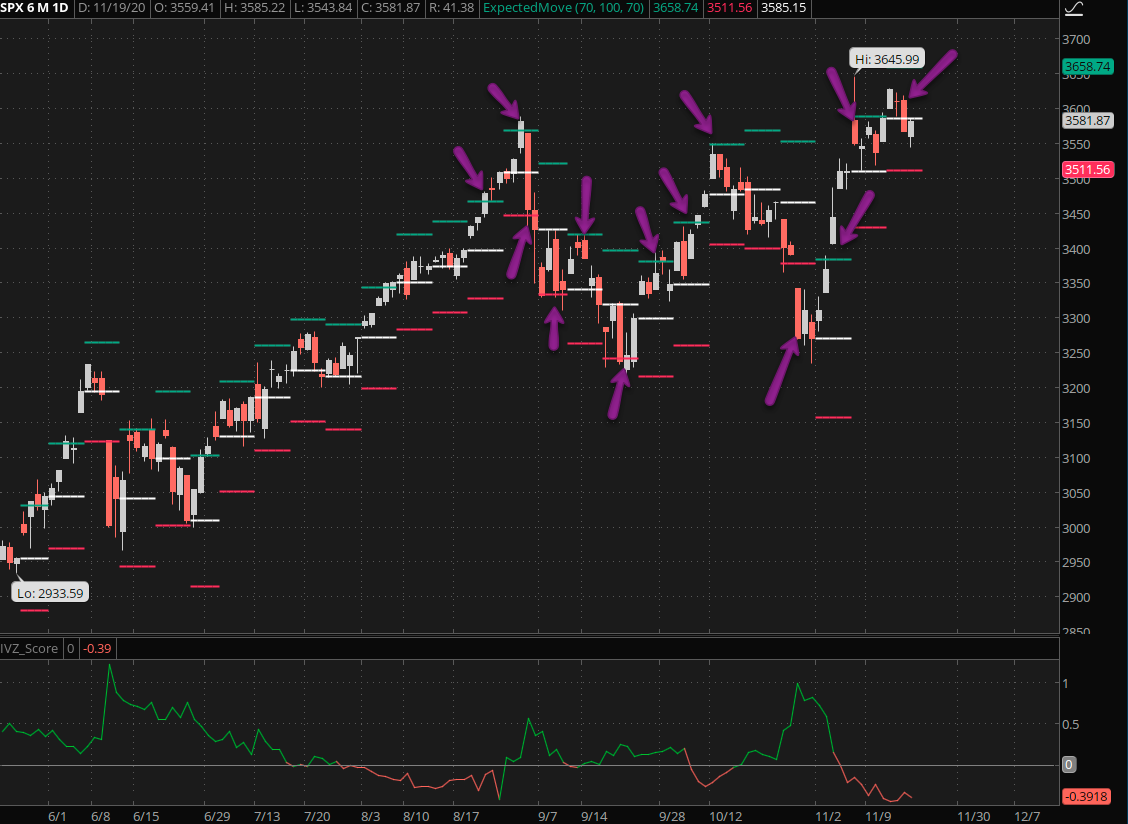 That doesn’t mean however there’s nothing we CAN do. Quite on the contrary. There are aspects of the market that remain to be fairly predictable and implied volatility, albeit being a bit of a conundrum hidden in a puzzle to some people, is actually very predictable and appears to be cycling between two major phases.

That phenomenon usually is the harbinger of wild times to come but just like 2020 is chockfull of contradiction not everything is lining up the way we usually are used to seeing it. 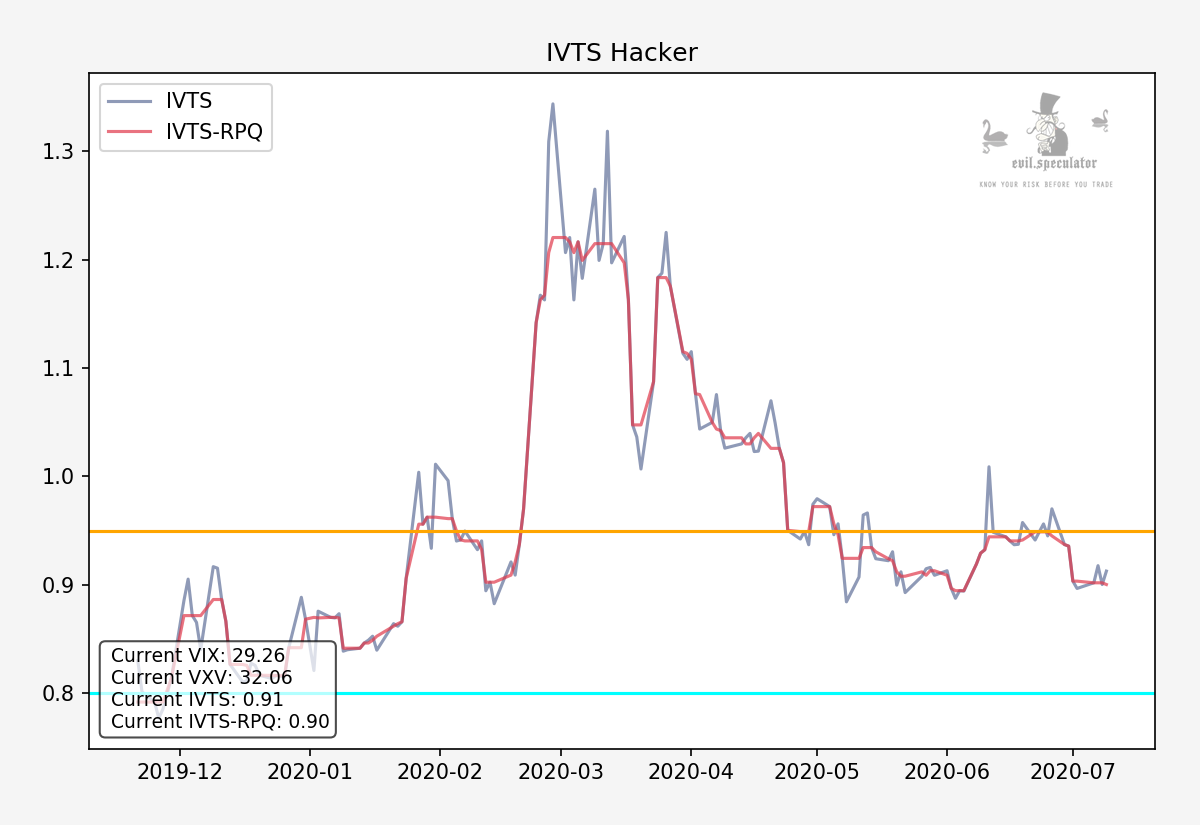 The implied volatility term structure (IVTS) for example is rather subdued and given what’s going on, it should be ranking a lot higher – much likely above the 1.0 mark. 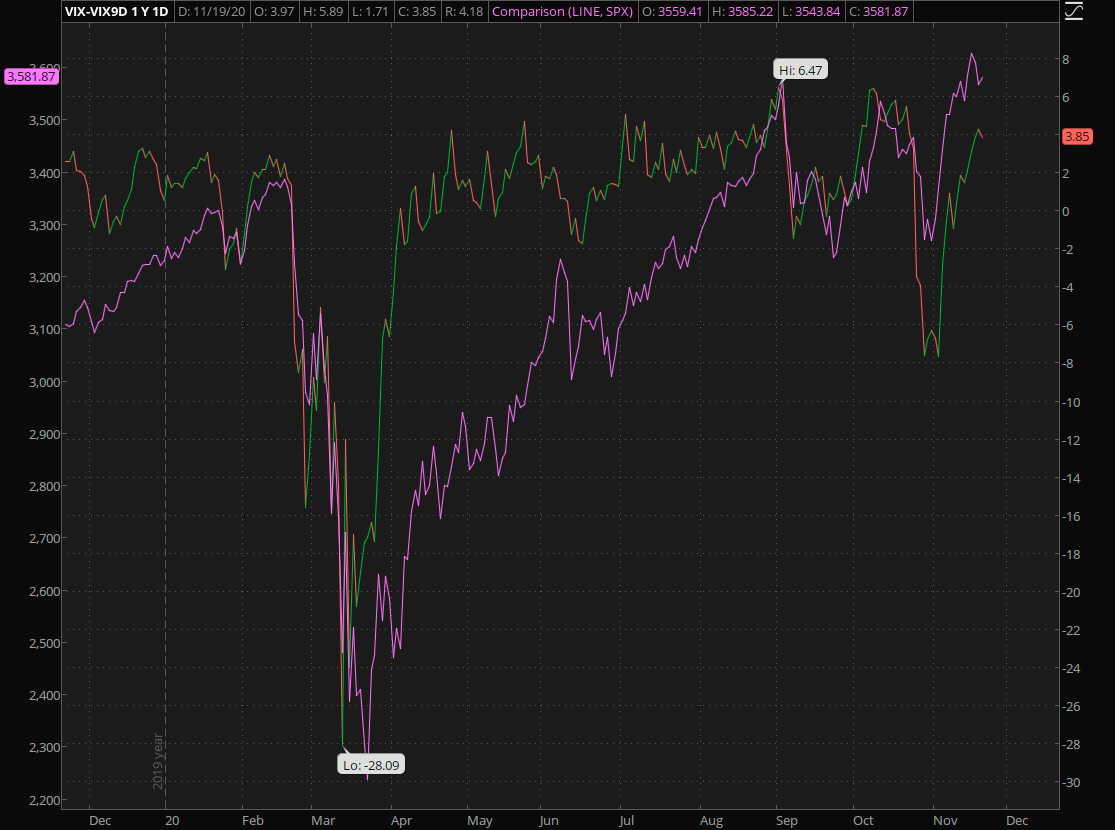 There is another way of looking at the IVTS and it’s as a confirmation of market direction. Not that we have much of that right now but bear with me. If you look at the VIX-VIX9D then you see that, with a few exceptions, usually either leads equities or confirms. It rarely runs counter and then is proven wrong.

Assuming you know how to read it that is. Often, like in late 2019 for example it continues to point higher while equities start flattening out. That’s usually a good sign that the former has in a late stage cycle and that’s what I look out for. The few times when it actually drops are valuable but I usually don’t base my trading on that alone.

What we are seeing on the IVTS right now however is it leading the equities market higher and that doesn’t necessarily tell me that equities are going to bust higher. Instead what it tells me is that the odds of a big crash right here right now ahead of the Santa Season is pretty slim. 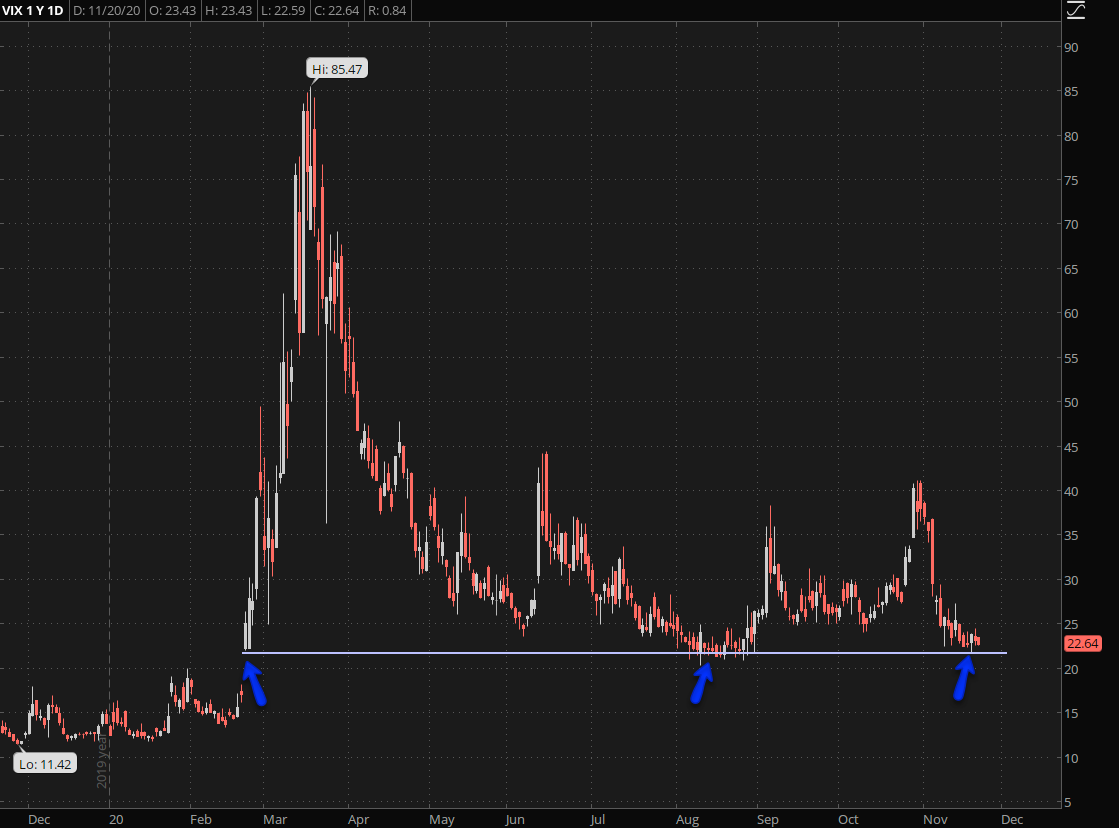 Under ‘normal’ circumstance of course but given the political drama in the U.S. right now, this could have course turn on a dime once litigation throws a monkey wrench into the big spin machine that’s the MSM. So if nothing else I do not recommend big moves right now. If you must shoot for the stars do it with options and on that front I have plenty of valuable tutorials to offer. 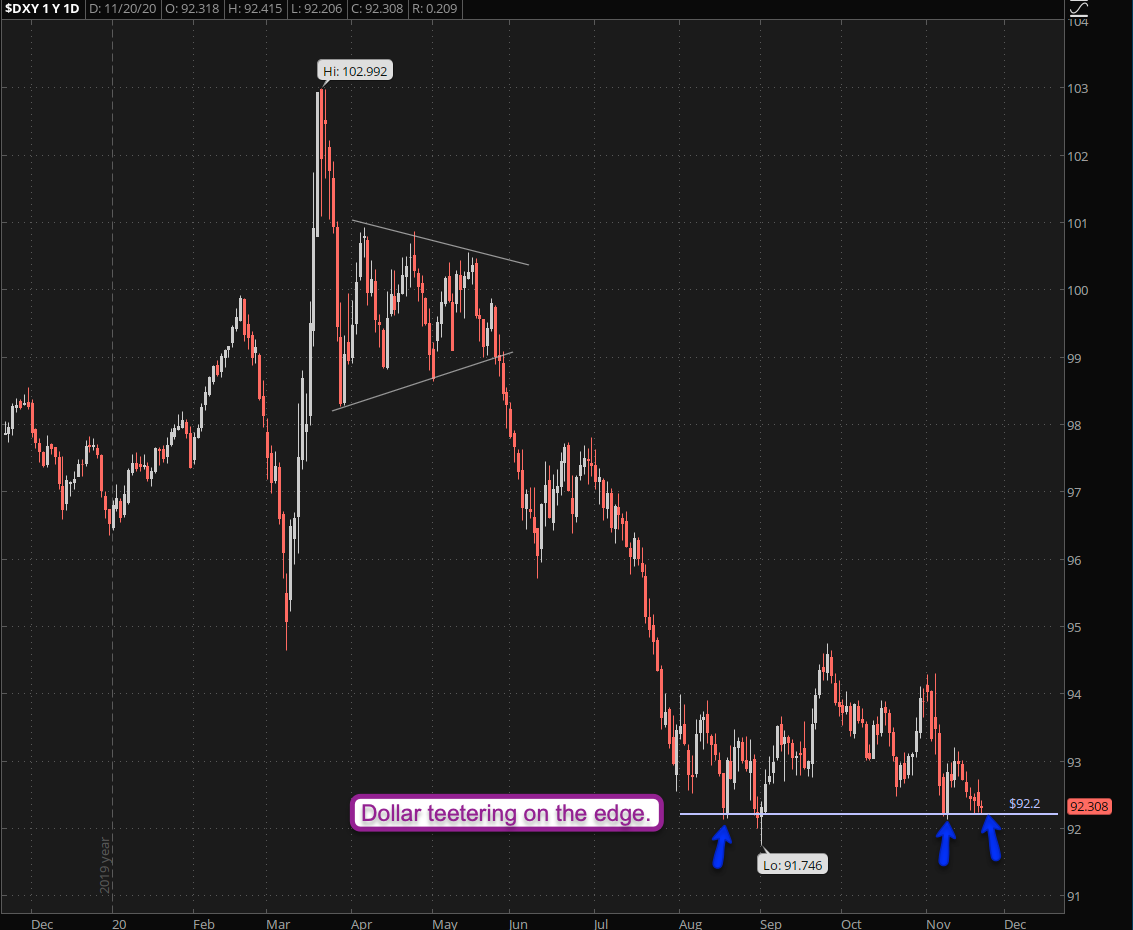 Now I read the other day that the U.S. debt has now ballooned to $80 Trillion which is up $8 Trillion from 2019. As inflationary intervention is not a linear exercise I estimate that we should hit the half Quadrillion mark sometime by 2025 plus minus a year or two.

No wonder the Dollar is teetering on the edge right now and why Bitcoin is pushing into the stratosphere. At this point the Dollars assets I hold in my accounts are losing value by an effective rate of 5% or more. That’s not a recipe for long term wealth accumulation if you ask me.  I should stop charging in Dollars and switch to Bitcoin at some point, which is becoming a possibility with PayPal and others now jumping into the fray.

More financial analysis and setups below the fold for my intrepid subs: