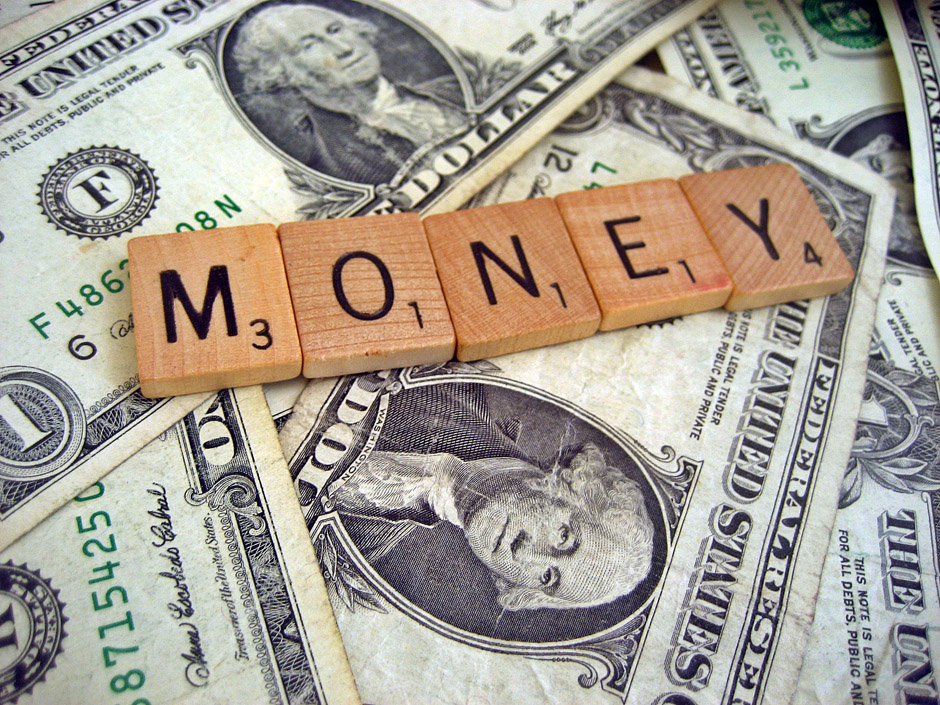 In 1815, Rothschild made his now famous statement: “I care not what puppet is placed upon the throne of England to rule the Empire on which the sun never sets. The man who controls the British money supply controls the British Empire, and I control the British money supply.” I read this statement as a young man and while it instantly became ingrained into my conscious it henceforth established the basis for my general outlook on life. Which in simple words boils down to “fade all the noise and just follow the money“.

You may not be aware of this but I was born and raised with what one may describe as a broken wooden spoon in my mouth. I should point out that my forming years were fairly uneventful and tranquil as I enjoyed Kindergarten and Great School in a relatively functioning family surrounded by the beautiful Austrian countryside.

It wasn’t until I became 11 years old that the wheels came off and I suddenly found myself in a foster home where I remained until I turned 18 years old and was allowed to venture into the world on my own. And when I say ‘foster home’ I mean a closed government institution reserved for who at that time were defined as ‘difficult children from broken homes’.

Which meant we were not allowed to come and go without explicit permission and if so only under close supervision until one was categorized not to be a general threat to society at large. I disappointed on that end a few times but in the end I did get my act together and turned into a functioning human being capable of building a life and starting a family.

The ensuing path to what and where I am now today, nearly 40 years later,  was riddled with much trial and tribulation. In retrospect I actually feel quite fortunate however as those years gave me a unique opportunity to experience life in a very raw and realistic fashion which left scant opportunity or time for futile mental gymnastics.

And that perhaps may be the reason why the past four years of ideological polarization all across the Western hemisphere seemed completely alien to me. Having been an avid scholar of history I have found simply too many examples of nations being led not only astray but often into outright ruin by flawed leadership. It’s not the exception, it seems to be the norm.

The fact that I was originally born in Germany may of course have something to do with that. However recall that my early years were spent in Austria and you may be surprised to learn that the Austrians, despite the fact that Adolf was born in Braunau, do not suffer from the same collective guilt complex that most Germans do.

And that bestowed me with a rather diverse perspective on not only view history but also current events, in particular the ones that seemed to be the ‘fashion du jour’. I clearly recall the mainstream media’s incessant droning about ‘global cooling’ in the 1970s all the way into the 1980s. Yes, you read that right – global cooling and not global warming was the prevailing worry during those days and they didn’t miss an opportunity to tell you about it.

Although my combined life experience has not turned me into a cynic (which is defeatist) it has instilled me with a profound sense of realism mixed with practicality. In other words, just because a lot of people seem to worry about something we are told to be worried about does not necessarily compel me to jump into the fray. Especially when it comes to politics.

For I have learned that politics and politicians always come and go, but money and power is eternal and even has the ability to transcend generations. Having being bestowed with none of either as a young man, and quickly realizing the basic principle that makes the world turn, I thus made it my mission in life to put myself into a position of strength and personal achievement.

It’s an endeavor that seems to have worked out well for me. I may not be a multi-billionaire people talk/write about (thank God) but I do okay and my lifestyle is lightyears ahead of what I even dared to imagine as a young man.

Some of my guiding principles during my life were derived straight out of stoicism which in essence is based on the notion that most of the things in life are completely out of your control, most people will probably disappoint you, and you’d better damn well act accordingly. Arguing about politics happens to fall straight into that ‘completely out of your control’ category.

Which means that wasting my time on trying to convince some schmuck online of my current political ideology (which incidentally is in flux during one’s life – think back to your youth) is a complete waste of time. For if there is one thing I have learned in life then it is that attempting to convince someone who’s already made up their mind to change it borders the impossible.

Yes, indoctrination and infotainment do have an effect over time. But that’s not my racket and to be honest the fate of any party, politician, public institution, or private organization weighs a lot less on me than that of my own family. Supporting which must be not just my first priority but my sacred duty.

Now don’t get me wrong. I am not going to sit here in my Spanish trading lair and claim that ‘politics do not matter’. They absolutely do and they affect all of our lives tremendously. My general point that I would like to get across here is that individually we have very little control over any of it, and thus one’s time engaging in politics and pertinent discourse should be attributed accordingly.

Yes, go ahead and cast your vote. Become involved politically on the local level if you choose. But to spend hours a day engaged in political quibbel or even arguments online has never been my cup of tea as my personal priorities heavily lean toward the practical and productive.

I am much more interested in spending time toward endeavors that improve my life and my bottom line. That may sound horribly capitalistic and selfish to you but it is the only course of action I can take given what I am see happening in the world around me.

Which again I have very little control over, but what I DO have full control over is where and how to position myself to not only survive any approaching storms but – even better – to benefit and prosper. That is one of the main reason why I launched this site in 2008 and it is what I have done ever since and plan on doing until the great reaper calls my name. 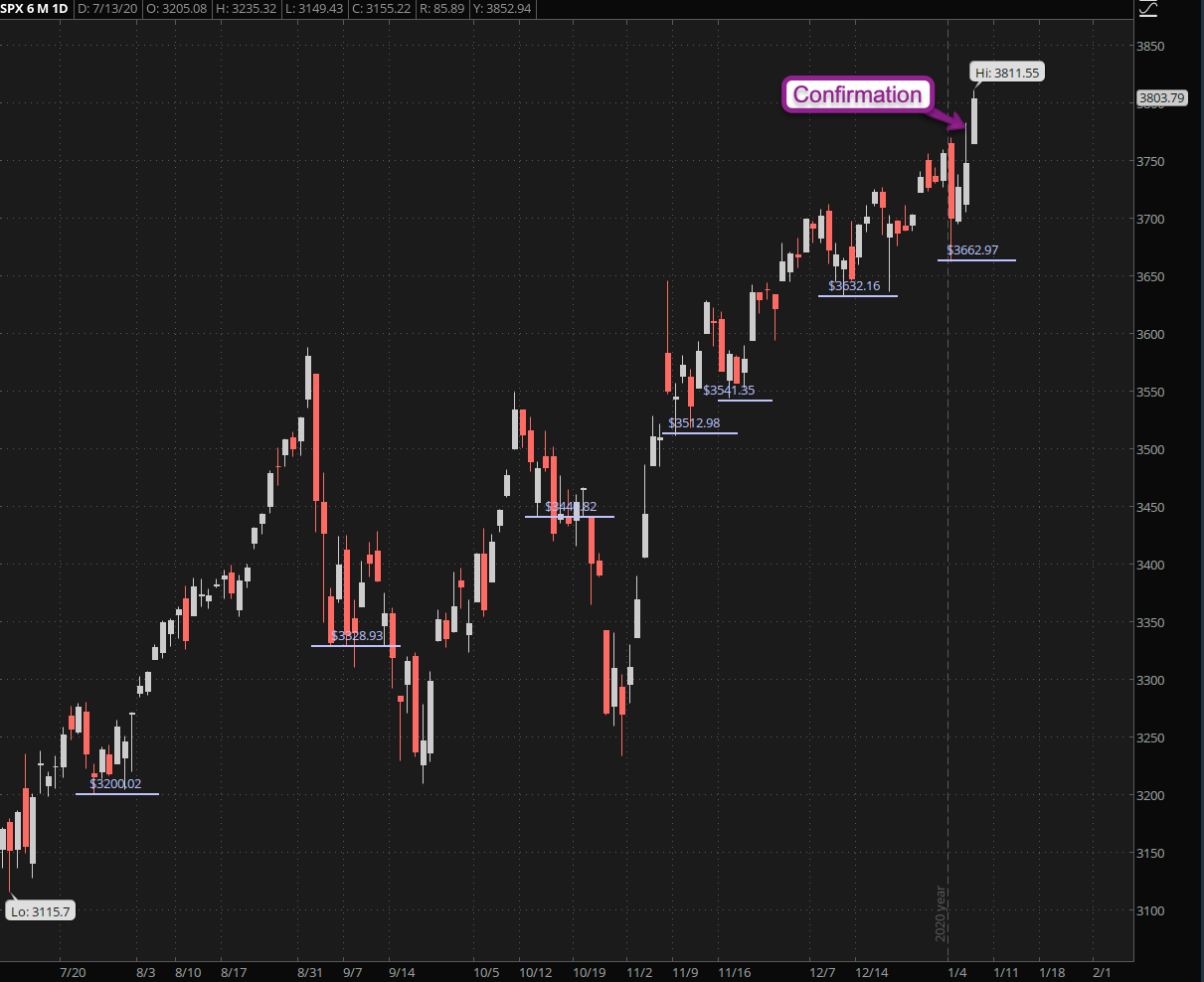 Speaking of prospering amidst all the chaos. My keep it simple stupid spike low perspective seems to be paying off as the prior spike low in the SPX is holding and we received confirmation yesterday as the previous spike high was breached. 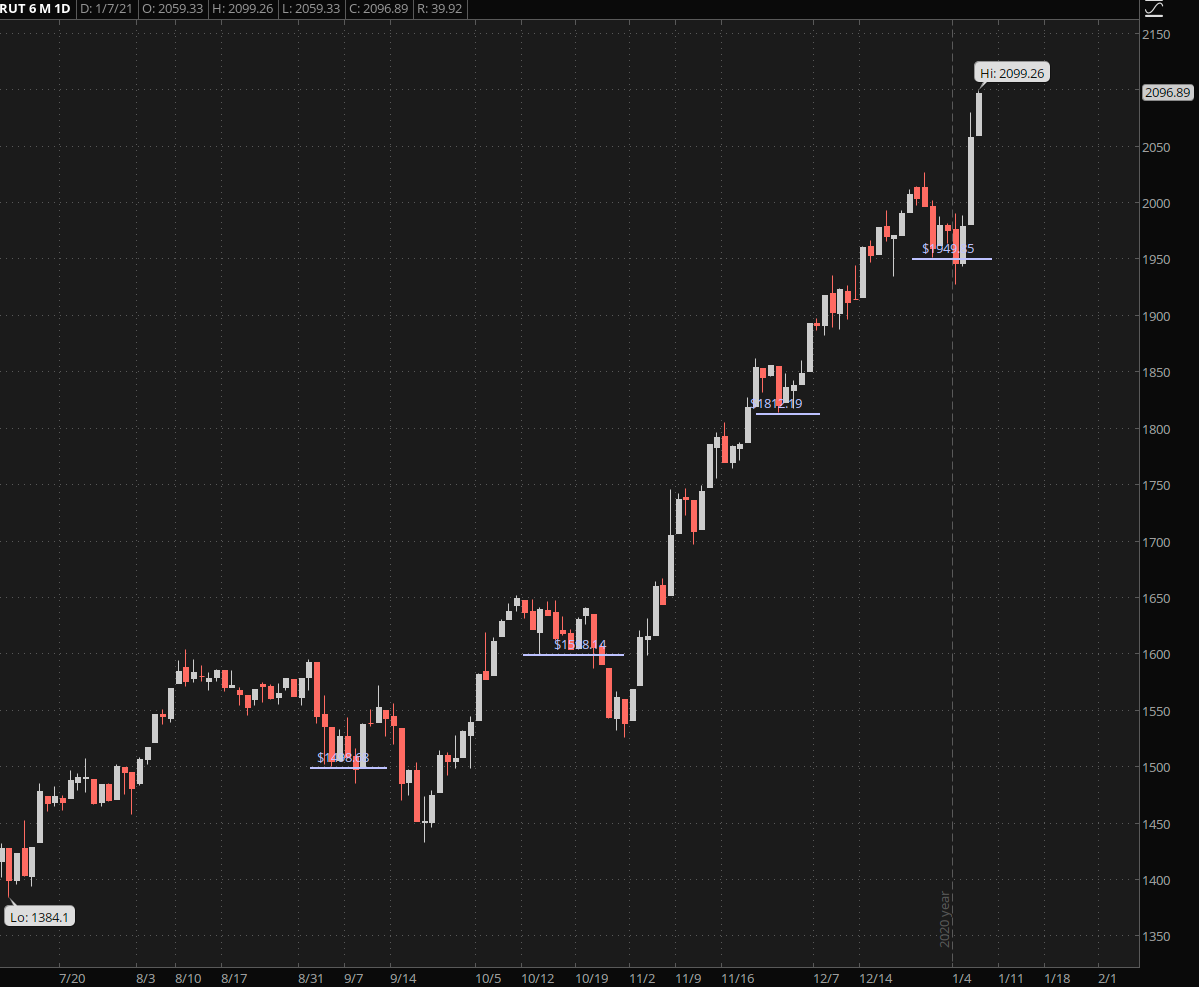 The RUT just as suggested was the fastest mover. IV across the chain was near the 30 percentile which is great for selling OTM spreads. It’s also one of the rare cases where buying a naked put or call may have worked, but as you may have learned in my Options 201 course – I just don’t like the cost basis. Too expensive. 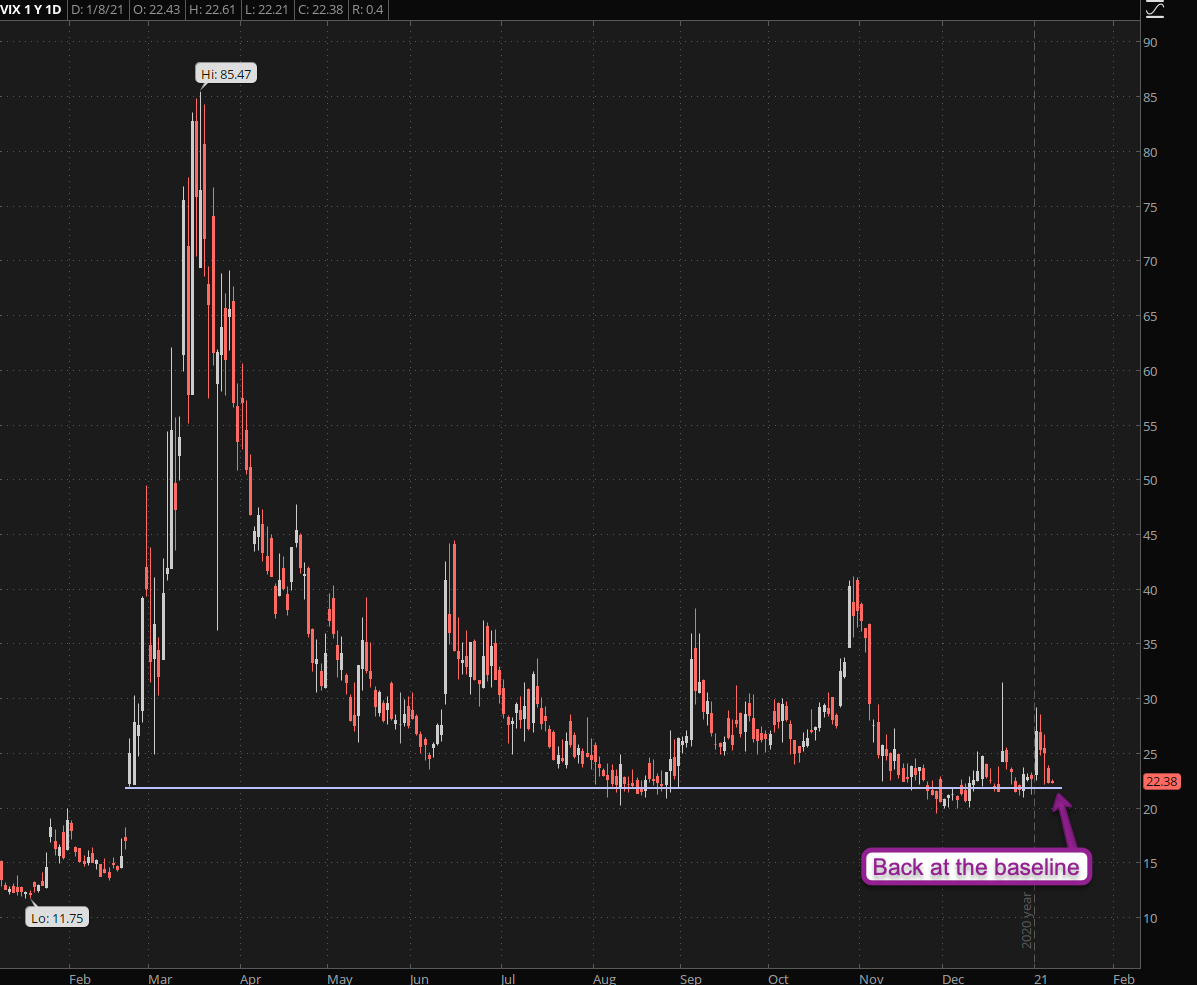 The VIX is back at its current baseline around the 22 mark. I am watching that with keen interest as a drop from here below the 20 mark would be a first since almost an entire year ago. What happens on the IV front in my not so humble opinion will set the tone for the remainder of 2021. 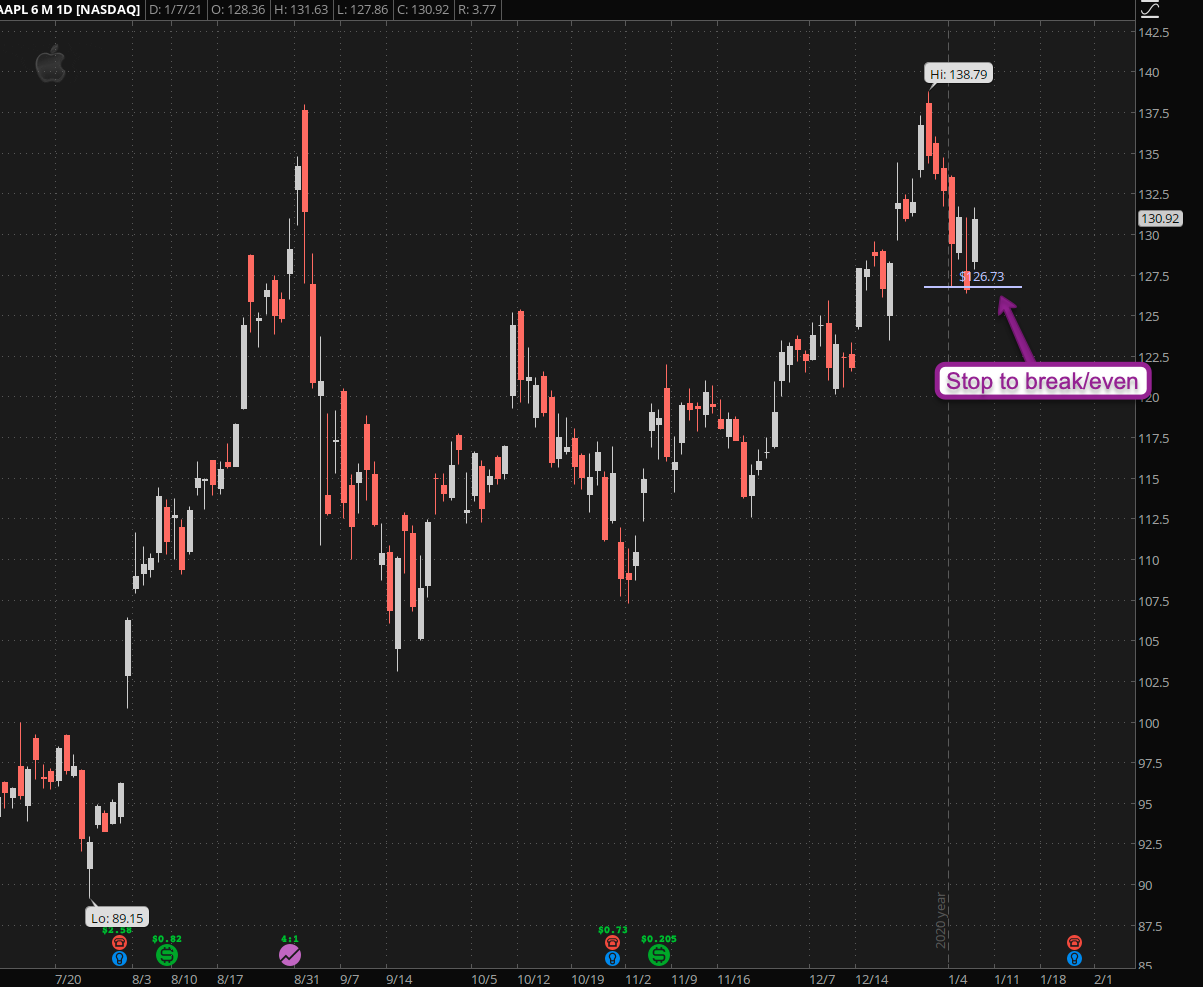 AMZN didn’t really move much since Wednesday but AAPL is pushing the right way. If you were trading the stock then set your stop break/even. Odds have it that you probably played the options via a spread, so there’s nothing to do until you reach max profit or until expiration.

Happy trading but keep it frosty (and non-political if possible).