After many years I rewatched the movie Saving Private Ryan with the Mrs. the other day and must admit that the first ten minutes of the movie almost brought me to tears. I know this may sound a bit strange coming from a born German – after all we are the baddies in the story. But as some of you may recall I became a legal U.S. citizen about a decade ago after a long arduous and costly process. Besides after not having set foot on German soil for almost 30 years now I feel a lot more American than I ever felt German when I grew up there. After all it was the United States of America and not Germany that afforded me the freedoms and opportunities to pursue my hopes and dreams and for that I will be eternally grateful.

Similarly I always held the deepest respect and admiration for the people who repeatedly put their very lives on the line for our republic. They didn’t ask any questions, swallowed their fears, stepped it up when called upon, and often made the ultimate sacrifice in an effort to defend and preserve the way of life most of us take for granted.

Whether or not any of these wars were ill conceived is a completely different story and beside the point. I would never dare to question the resolution and dedication of the many men and women who devoted and continue to devote their lives to protecting and defending our nation. None of them ever asked for any favors or expected any special treatment. Quietly and diligently they serve while we all enjoy the privileges of living in a free country. Let us all hope it stays that way.

We should all be thankful for their sacrifice, not just on Veteran’s Day but every single day of the year. 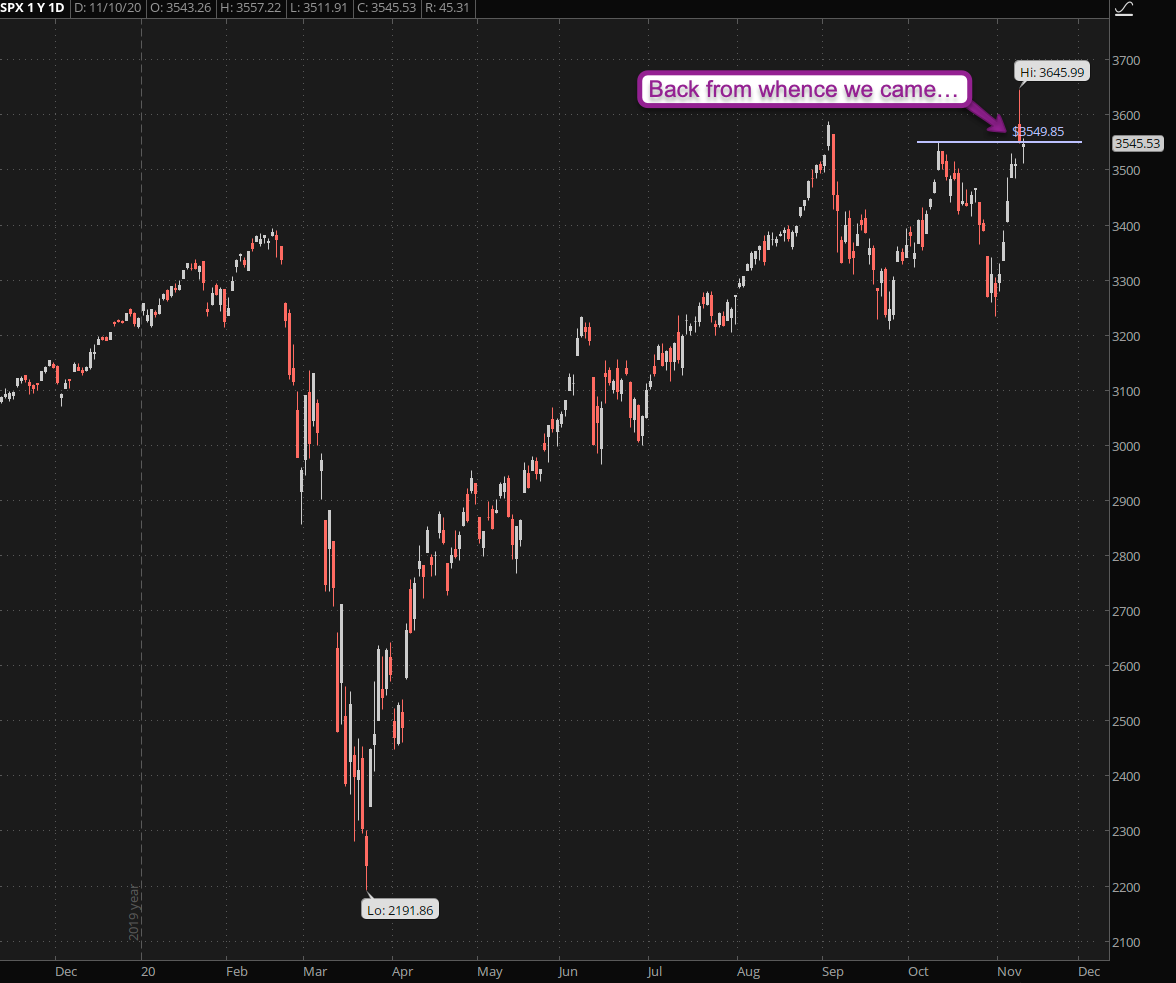 Alright, let’s get to the market. On the equities front we are effectively back from whence we came on Monday morning. The current formation does look like a possible low off top and what happens next has deep implications on the long term perspective.

Not to sound overly dramatic of course. A drop from here could easily just be a shake out attempt. It also affords us the chance to BTFD should the SPX either stay and hold here or fall and then recover to 3550. However a hard fall below SPX 3400 would open the door to a triple top scenario that would us lower, MUCH lower, possibly to SPX 3000 or below.

Thus definitely something to keep in mind but there is no short term urgency. Following my own advice I did buy some OTM puts as well as hammock spread (i.e. a fat put butterfly and a call ratio spread) near the top while IV was subdued. 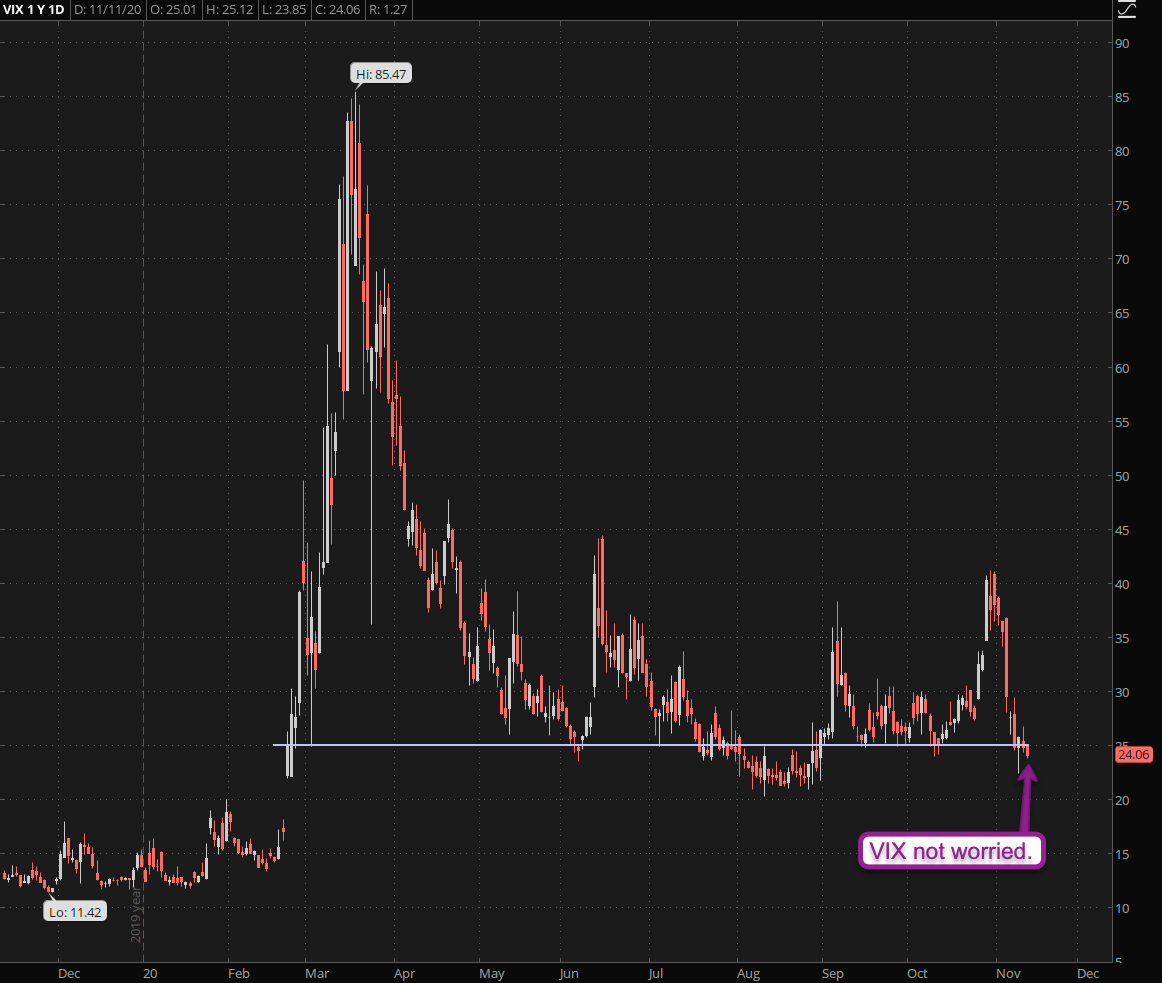 Despite yesterday’s sell off the VIX has barely budged  and is actually falling right now based on overnight activity. So it’s fair to say that market participants are not overly worried and that the current reversal is nothing but profit taking and an attempt to shake off some weak hands. 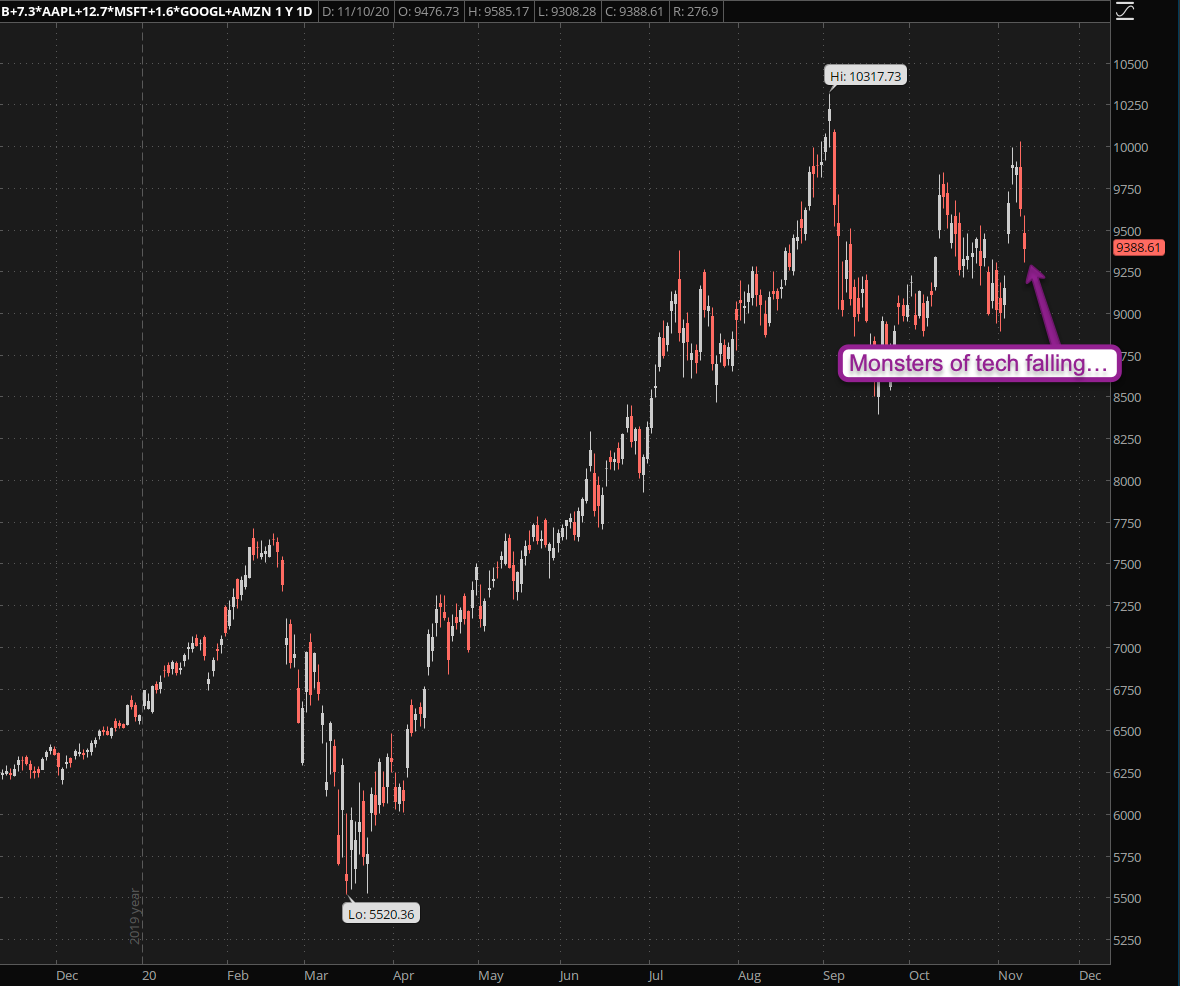 My monsters of tech composite has been falling hard over the past two days which is a bit surprising given the current official tally in the 2020 presidential election saga. Once again could just be profit taking but I’ll keep a close eye on this sector.

And no, in case you are wondering, I am not touching these with a ten foot pole right now as the current move still looks incomplete. 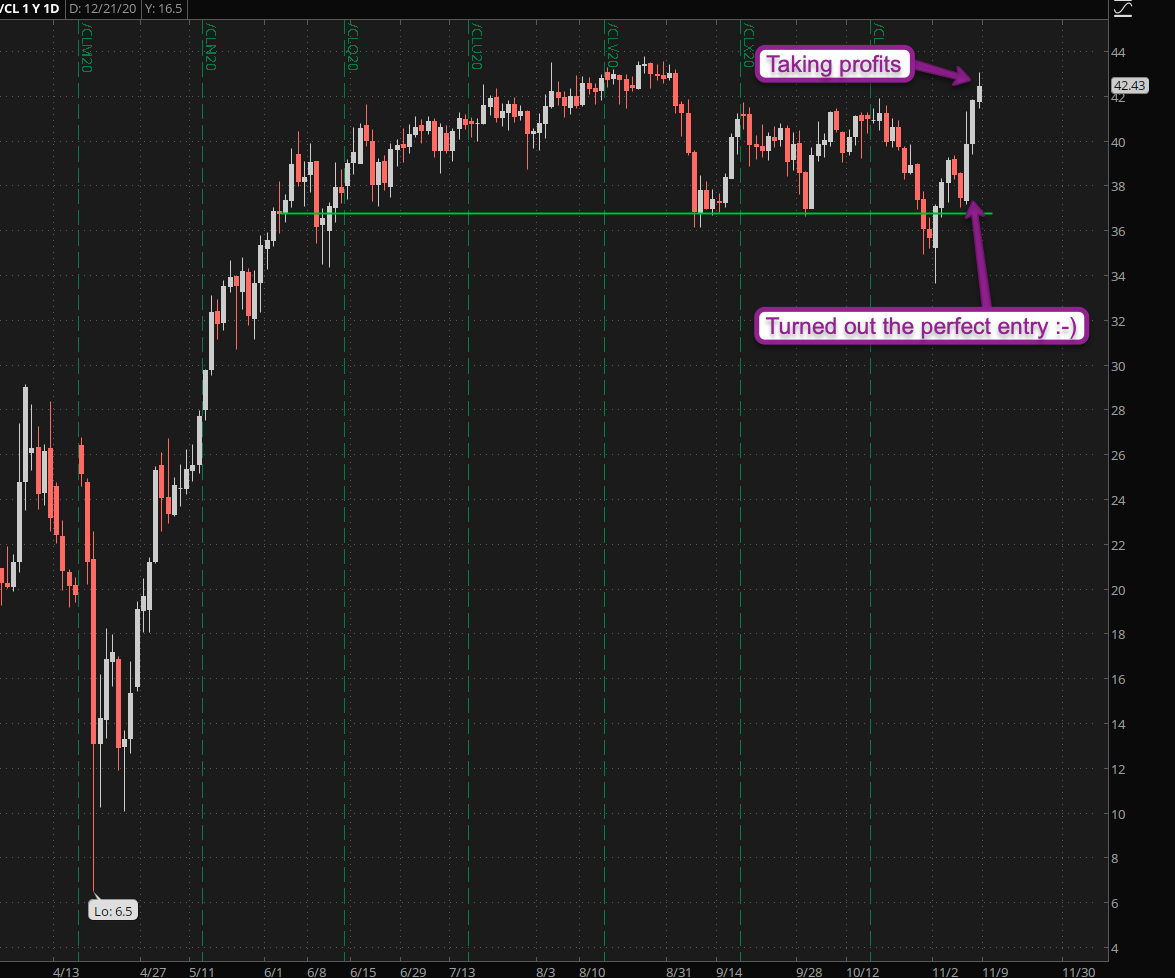 Quick update on my crude campaign, which produced a juicy 3R in profits but now it’s time to part ways as we’re heading into a possible overhead resistance zone. I’m not one to boast but that was one perfect entry and I hope some of you subs caught it 😉

Speaking of my intrepid subs  – here are some new setups: