Cashing Out Of FXE

Biden’s confirmation of Janet Yellen as the Fed chairwoman 2.0 pretty much sealed the fate of the U.S. Dollar and I expect it to be renamed the ‘U.S. Weimar’ just before its replacement by monopoly money which it appears to be more resilient against haphazard inflation. But to be honest a crashing Dollar is par for the course for a nation that is incapable of holding a presidential election without certified results over one month later. 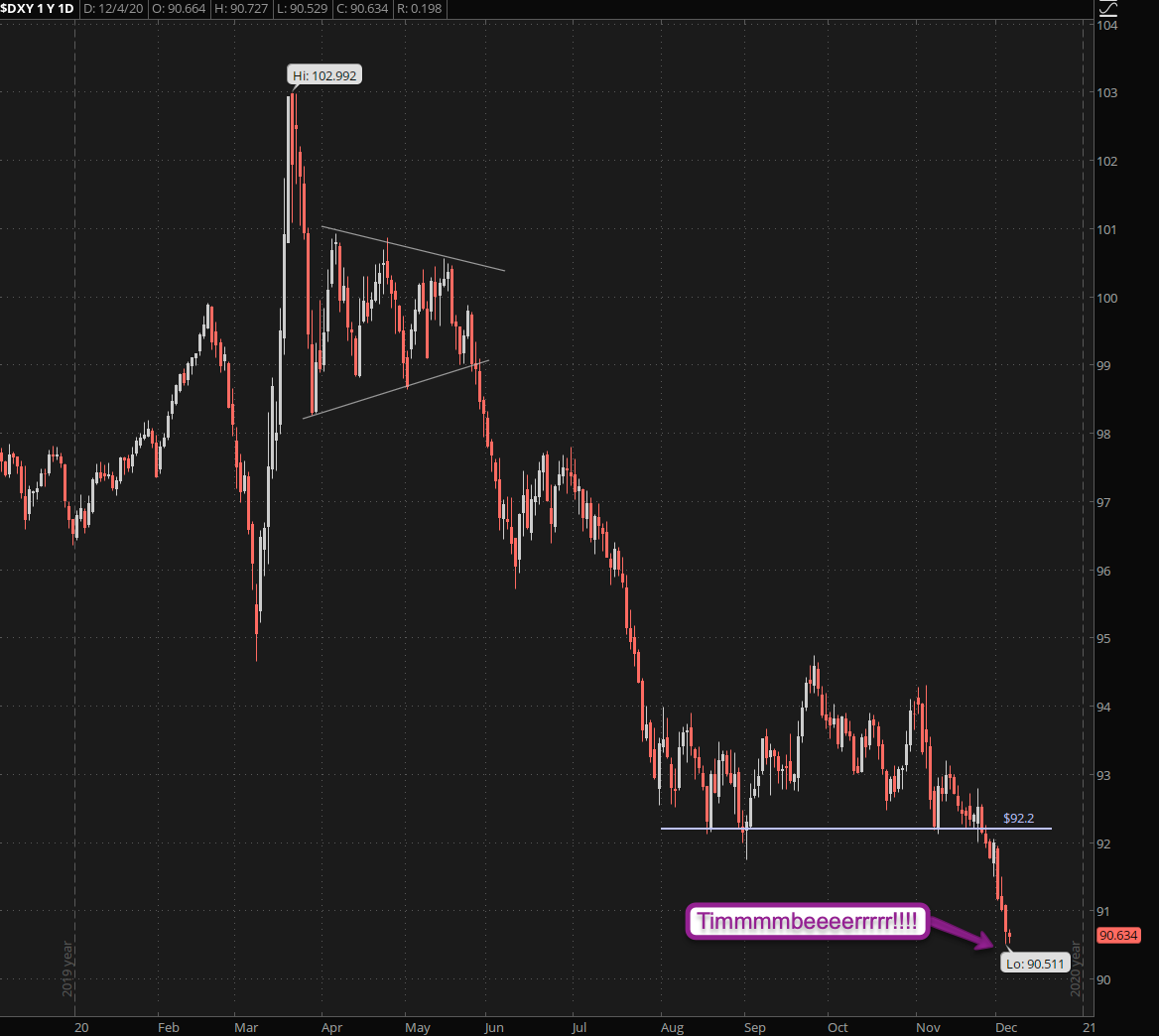 The 90 mark is straight in sight but given the current trend we could quickly see ourselves at the 85 mark. Not a fun prospect for this expat, I gotta tell ya.

Everyone seems to love love love a weak Dollar – and tell their friends about it at parties – until they realize that selling your house for double the purchase price doesn’t really matter as all the other houses you would want to buy have doubled in price as well.

So unless you still are in the business of flipping houses for a living the ‘profit’ you may claim is an illusion as the purchasing power of the currency it’s denominated in is systematically being destroyed. 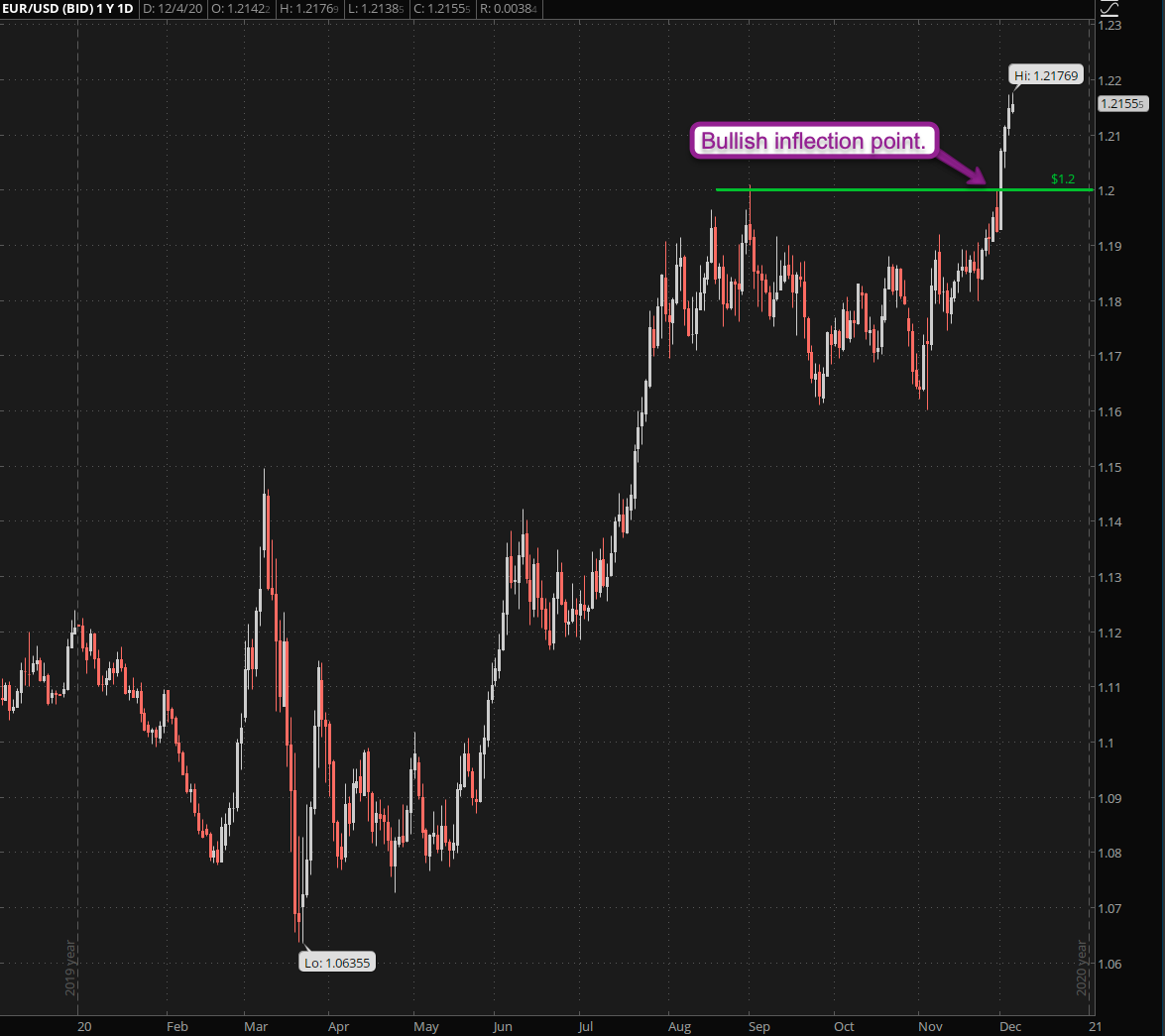 Here’s the Euro which is now going gangbusters as everyone and their uncle are expecting to the Euro to become the next reserve currency.

Which is tantamount to jumping from the fire into the frying pan but I have long given up on trying to make sense out of tidal waves in investor sentiment.

Incidentally this is the chart I emailed everyone on Tuesday in a special update. A few subs wrote me love letters over the past two days, so I guess I earned my keep for the remainder of the month 😉

Anyway, I should not complain about the Dollar as I was well hedged against this very scenario via my notorious hammock options strategy (i.e. a double backratio but its composition varies based on IV). A course on that is in the works.

That’s a 4R return and I am happily cashing out today while the getting is still good. Could it pop much higher? Sure it could but over the years I learned when to cash in my chips and call it a day. 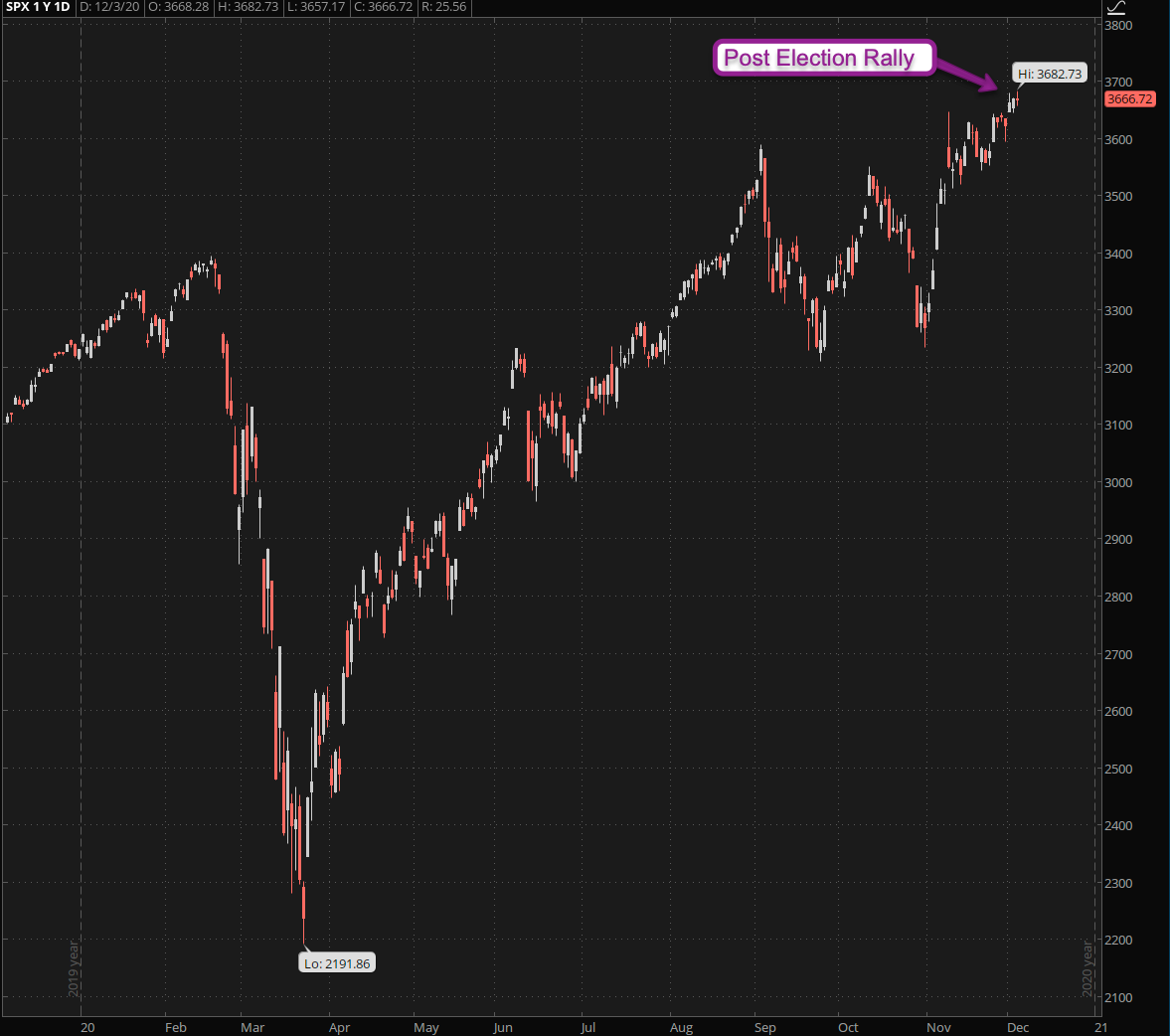 Equities meanwhile – denominated in Dollars of course – are pumping higher into new all time highs. I would call it the ‘Biden Rally’ but since the outcome has not yet been officially certified yet let’s stick with ‘post election rally’ instead. 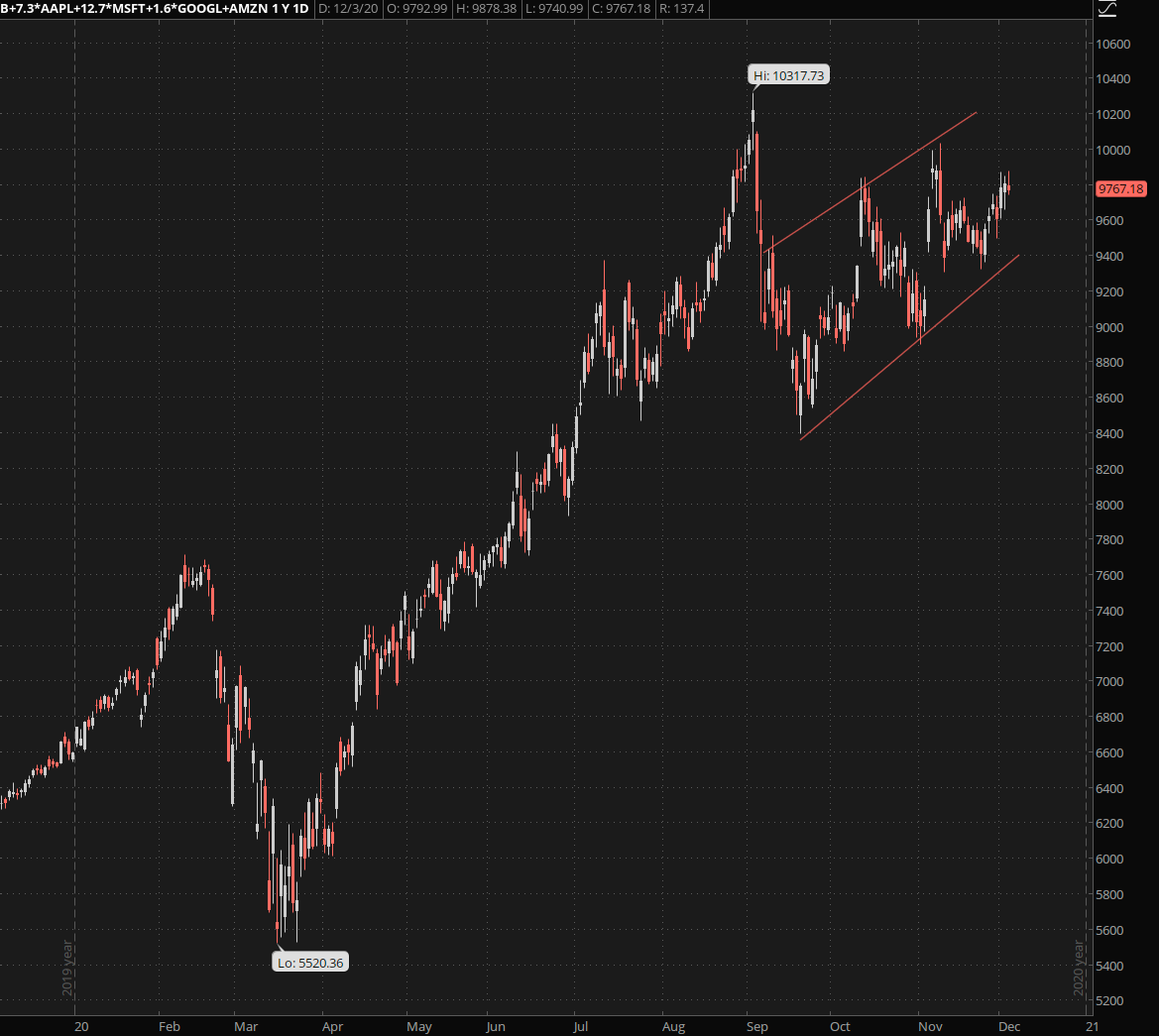 What continues to irk me however is that the ‘monsters of tech’ are NOT participating. And if you consider that tech, and the symbols in this composite symbol in particular, has been driving the entire 2020 bull market, then it casts some doubts on whether this rally has legs.

And then of course there’s the VX futures curve which remains in contango as shown last Wednesday. 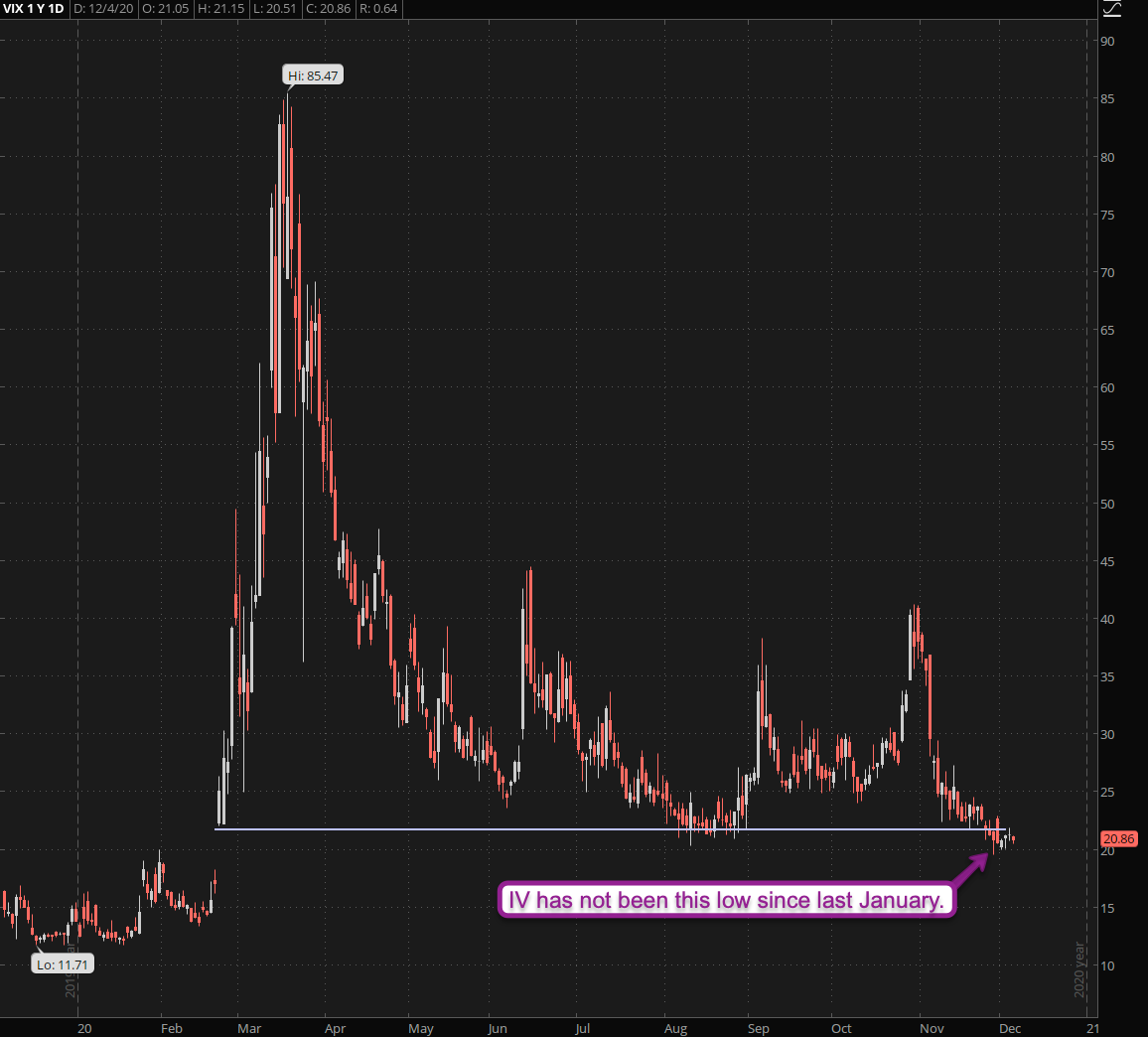 In that post I made a point about falling IV and I would be amiss to not point out that we are still holding steady at lows we have not seen since early this year when all the COVID shenanigans began.

I consider this an awesome opportunity for placing medium term VIX back ratio spreads and if you’re a Gold or Zero sub then you already know why as it was explained in detail on Wednesday.