At The Edge Of Expectation

It’s Friday morning before the open and the SPX is pinned right at the edge of the weekly expected move (EM). The ES futures pushed a little bit higher overnight but are now treating water awaiting further instructions. Which makes it a textbook example of the very phenomenon that has driven equity markets to the edges of the weekly EM since the introduction of weekly options by the CBOE in 2016. But what exactly is causing this phenomenon, or market behavior in the first place?

Let’s time travel back one week to last Friday October 2nd. The SPX closed the week at 3348.44, but for the purposes of this exercise we are rounding it up to 3348. With IV at slightly under 24% the EM for the SPX contract expiring today was about 90 handles. 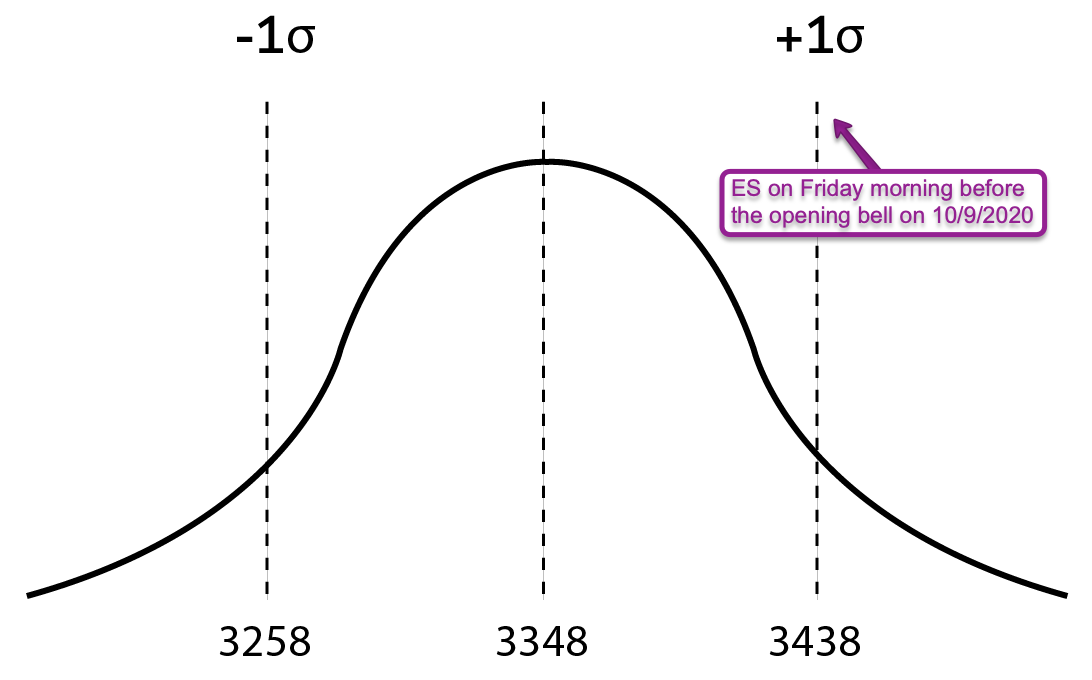 Which basically put us into the range shown above – 90 handles up and 90 handles down marked by an upper expected price threshold (ETP) of 3438 and a lower ETP of 3258.

Now let’s say you have a big SPX position on – perhaps you are a big trading firm and you may be a net buyer of options in the SPX. However lots of firms actually go out and they strategically SELL options. So what does that make them?

Well if you are SELLING options then you are expecting the market to stay INSIDE the expected move. Remember the debit you pay for a an option or an option spread is based on the expectation that the market will stay inside a particular range 68% of the time. Everything in life revolves around a distribution curve.

So here you are having sold a ton of SPX options. If you had bought options you are hoping that we are moving OUTSIDE the EM. But since you SOLD options you are squarely in the opposing camp. You want the market to stay inside the EM. And that’s a fair and two sided marketplace and it’s happening on a constant basis at any point in time, every single day.

What Is The Market?

Now think of the expected move as the market. What was the EM for the contract expiring today? It was $90 to the up and down side. Then it’s a $90 market place.

Because an equivalent number of buyers and sellers collectively arrived at that particular number. And because if you would have looked at the ATM call and the ATM put last Friday near the close – that’s the number you would get, right?

Remember that the ATM call and the ATM is effectively the expected move, give or take a Dollar or two. And of course since it’s 2020 and not 1920 or 1980 even, both sides are using sophisticated automated hedging algos.

And what they are doing is this: Imagine if you are selling options – any option. What’s was price of the SPX right last Friday? 3348? So let’s say you sold the $3350 call. What happens as the price goes up? What happens to them?

They lose more and more money – that’s what happens. And just like you, they don’t like it one bit! Because they’re getting killed. So what do they do? The more we go up, they go out and buy the ES futures as a hedge. Clear so far?

Now there’s another firm out there and they bought a bunch of $3350 calls. And guess what they do?

NOTHING because they are banking coin? Nooo, actually they more we move up they actually go out and SELL the ES futures to offset as it’s actually helping their positions. I know this sounds counterintuitive to retail traders but let’s just say that they are in a strong position to sell against their winning positions and to offload the risk of losing the profits they’ve made.

And what all this creates is for the market to get locked inside these ranges. Some of these firms effectively are what’s called long gamma – and some of these firms are short gamma. I’m sure you’ve heard this term before but didn’t know what it meant.

Well, guess what – now you DO! You just joined the exclusive gamma trading club. Yes we have silly hats but we are not allowed to wear them, except once per year in a secret location on a secret day.

I’ve often talked about how large financial firms are buying and selling options whilst hedging themselves in the futures. Yet there is yet another group of firms that is engaged in what’s called statistical arbitrage – a.k.a. stat-arbs. Their sole business revolves around figuring out how schmucks like us are making money and stepping in front of us to pinch-off a few pennies. I call them the vultures of the marketplace.

These guys play a different game – as we go up they continue to buy and as we go down they continue to sell. But as we have seen – all of a sudden we somehow stop as we get to the edge of these expected moves. That is because all these firms they are not specifically trading based on the EM. They are trading options in a chain that are based on the expected move. But the ensuing hedging is actually what drives us right to the edges of the EM. 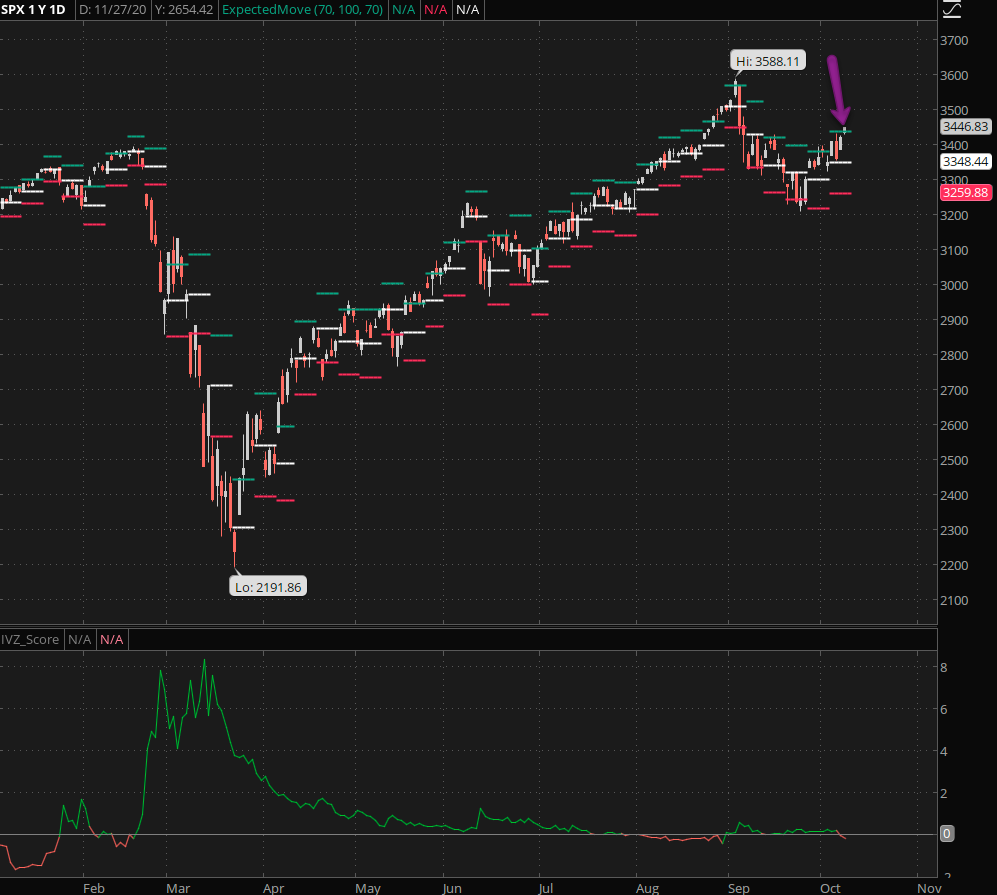 The index-arb boys are doing the opposite, but what they all share in common is that they are now effectively trading outside their comfort zone. Which in turn produces a flurry of activity that usually results in one of two scenarios:

Either scenario is volatile and it would be fair to assume that we’re going to see quite some fireworks today. However predicting which way we turn is difficult to do. Over the years I’ve run extensive stats on implied volatility and expected move in particular, and based on this I can confidently say the vast majority of the time (80% +/-) the EM wins the battle.

The few times it doesn’t retail in particular (notorious for buying OTM options) enjoys its rare day in the sun while institutional traders get taken to the woodshed if they failed to properly hedge themselves. It doesn’t happen very often on average but it has increasingly happened in 2020 due to accruing global instability plus we passed through what is probably the most controversial election season in U.S. history.