A Week In The Pyrenees

The only silver lining of the global COVID-19 epidemic from my perspective was that it forced the city of Valencia, which we have called home for the past nine years, to cancel its annual Las Fallas celebrations. This happened twice in a row, first in March of 2020 and then again in March of 2021.

It was decided against the wishes of the powerful Spanish tourist lobby and much to the chagrin of a legion of ‘falleros’ who live for nothing else but to turn a charming Mediterranean city into the 21st century rendition of Sodom and Gomorrah.

And that meant that, twice in a row, we were spared from having to escape Las Fallas and wait things out in a remote vacation spot until the smoke had finally settled. Literally actually as the final day of the festivities consists of ‘la cremà’ during which dozens of oversized styrofoam statues are publicly incinerated.

If you are like me and have no plans of suffering from lung cancer past the age of 50 you do what we are forced to do every year: GTFO, only return once the coast is clear.

Fortunately twice in a row we has been spared from this dreaded spectacle. A global halt in international tourism and rolling lockdowns meant happy times for wet blanket party poopers like us. Or at least so we thought.

Because this year the Valencia city council, in its infinite wisdom, decided to postpone Las Fallas to the 1st of September. Which is a brilliant idea because the only thing that makes breathing though an FFP2 face mask in 95F heat at 85% humidity even more enjoyable is to add a mix of toxic fumes and ash into the air.

What could possibly go wrong?

Well I don’t intend to find out, and that’s why the Mrs. and I are heading up into the Spanish Pyrenees where the vistas are majestic and the air is pristine.

Unfortunately true to form it’s going to be raining there almost the entire time, meaning we may be stuck at our cozy little airbnb for most of our vacation.

But at least it’s going to be peaceful and quiet as the little pueblo in Aragon we are visiting consists of only 128 people. And I have an inkling they don’t exactly live there to party.

Then again, they are Spanish after all, so you never know… 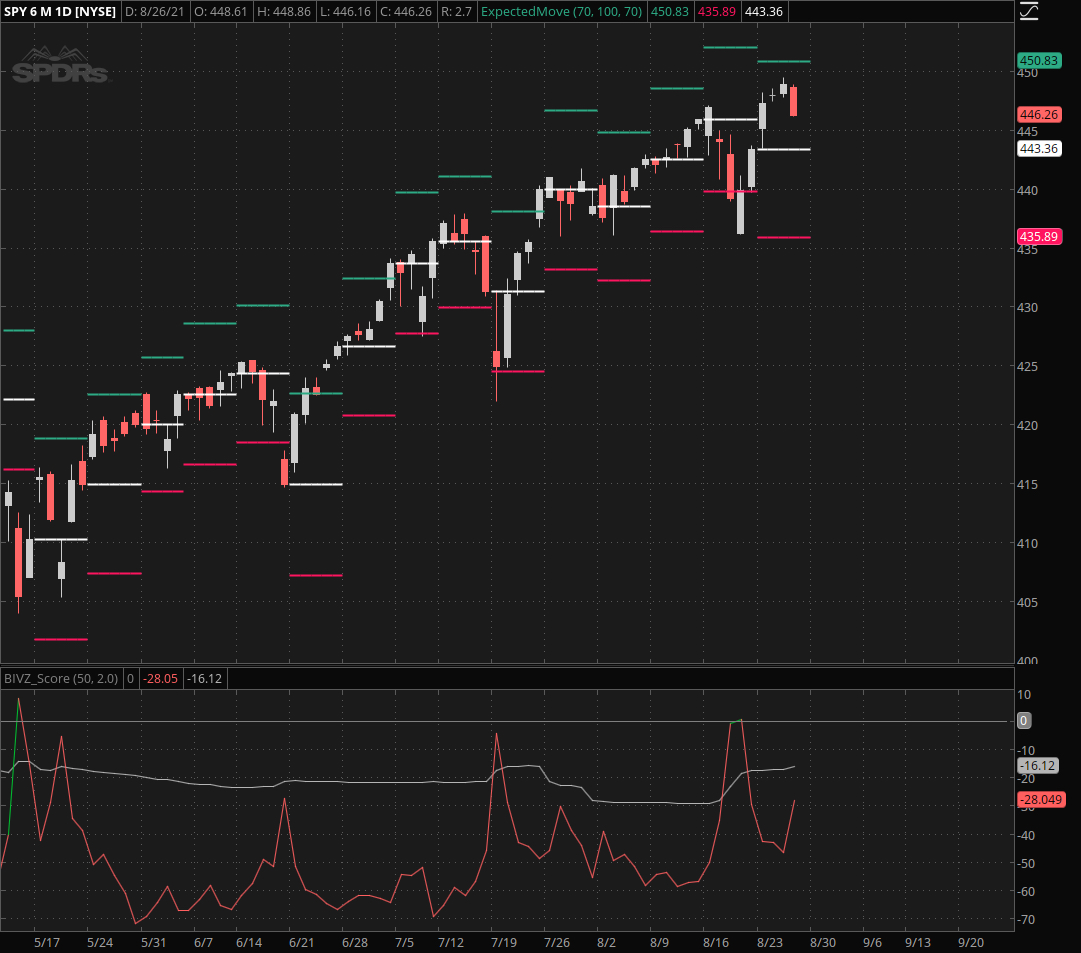 On the trading front I’m already feeling a bit drenched as the whole Kabul debacle rained all over my butterfly parade at SPY 450. Everything looked like we were ready to touch that upper threshold by Friday but yesterday’s session completely smashed that hypothesis. 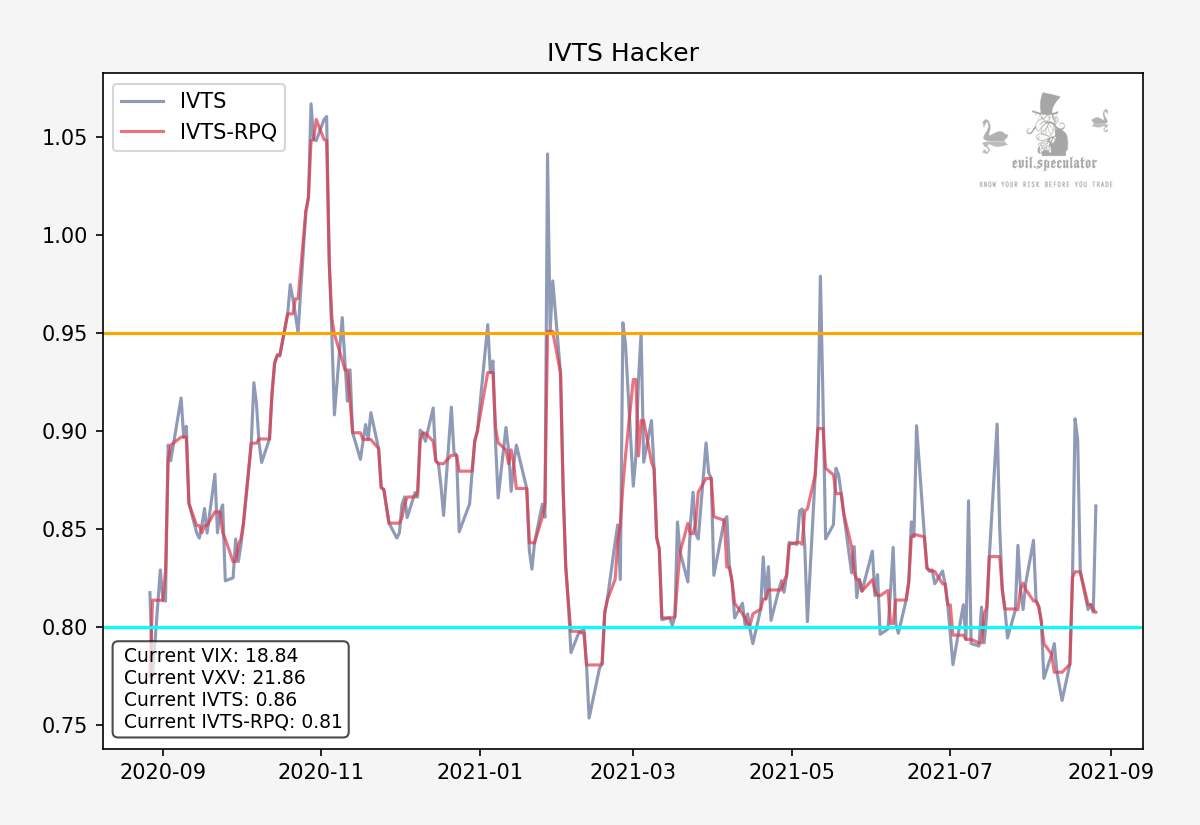 The IVTS (implied volatility term structure for you noobs) jumped quite a bit and I do expect a reversal to the control either today or by Monday. As you can imagine I would very much prefer it happen today (as it would mean a reversal in equities). 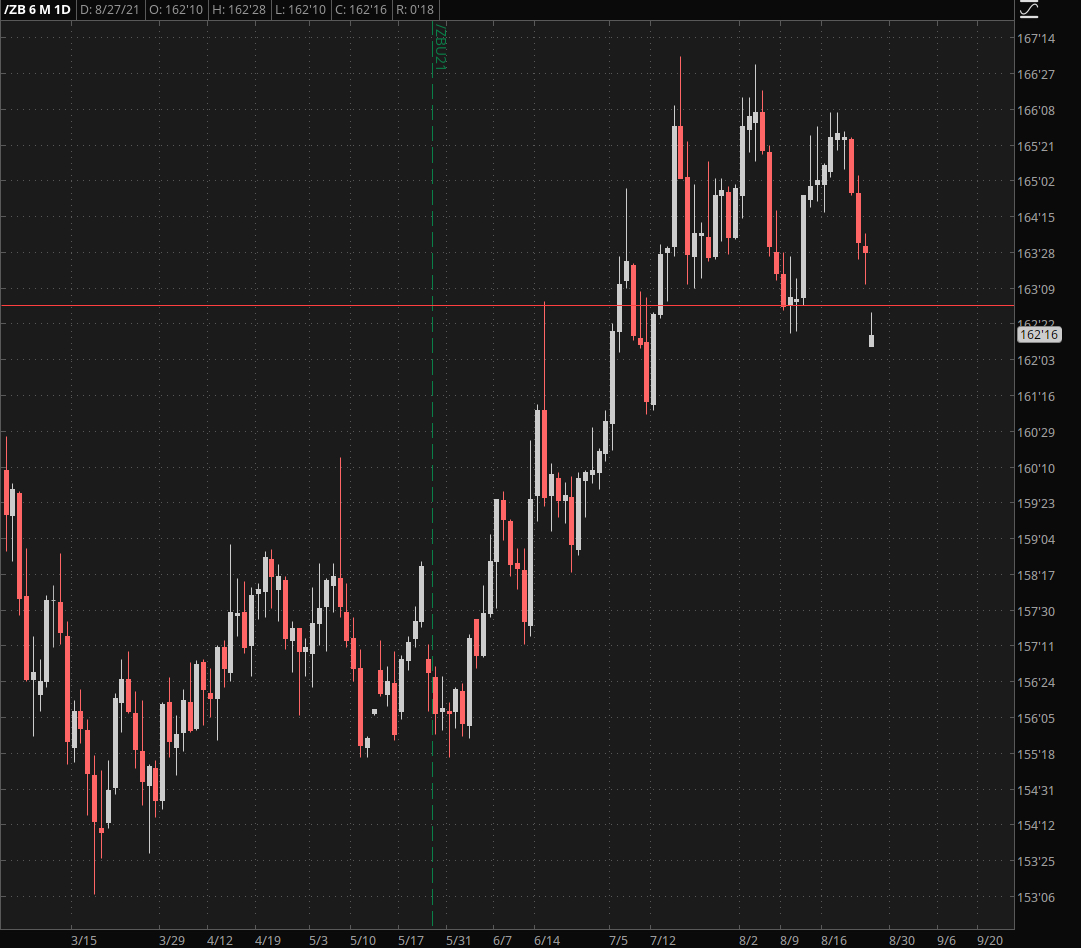 However the sector you ‘should’ be focused on right now is the bond market, and the 30-year treasury bonds in particular (here shown the ZB futures). This drop below 163 is pretty serious and unless it can be instantly reversed there may be some hard times on the horizon. 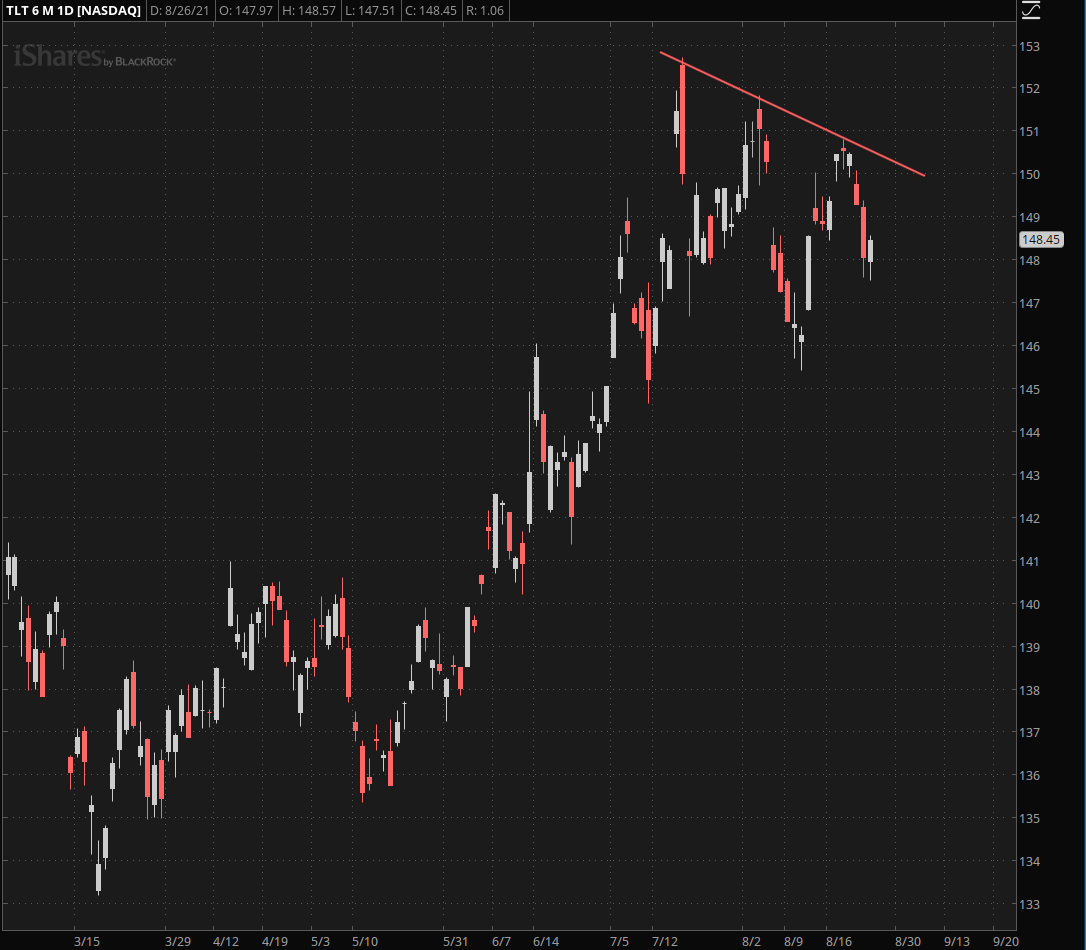 TLT is lagging thus far so we shall see. Here the inflection point is at 145.5 and we’re still ways away. Should we see a drop through that I would consider it confirmation that we are heading into a fall reversal – and fall 😉 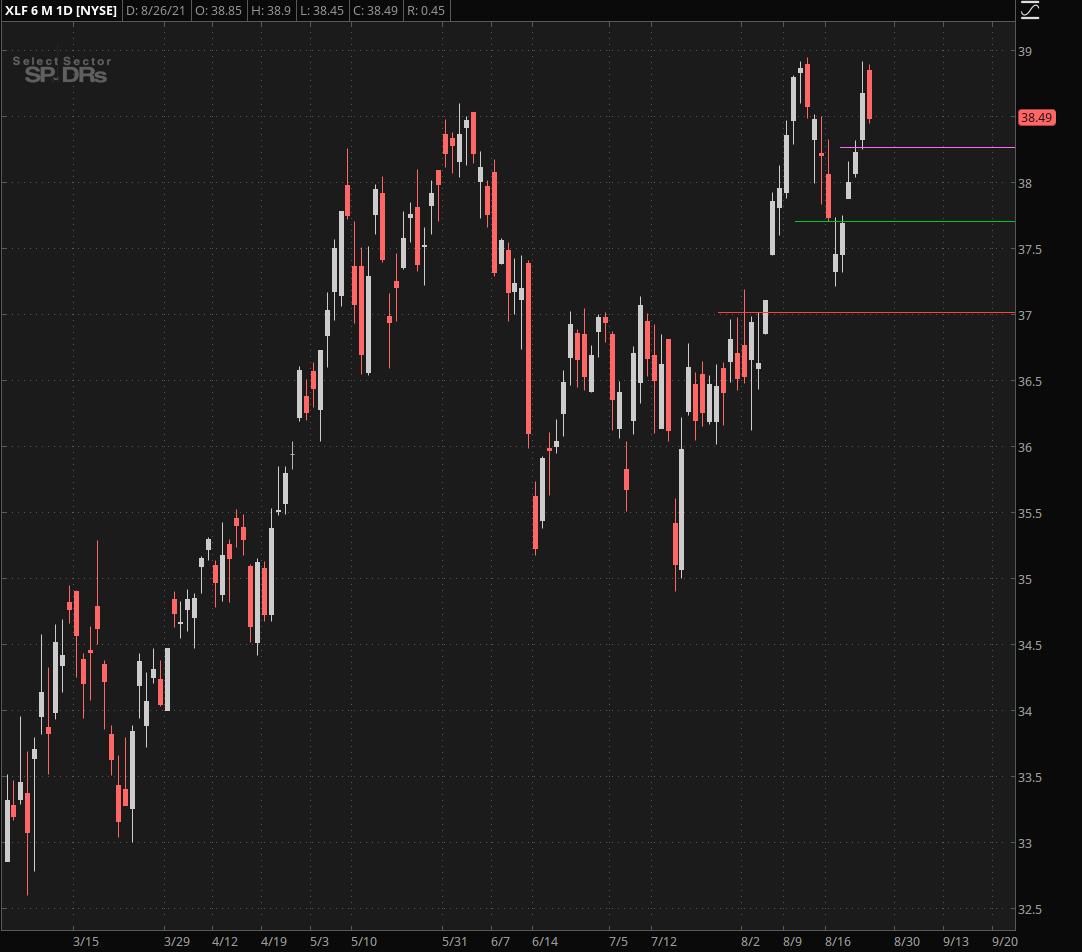 XLF update: I am raising my trailing stop to 0.8R as it’s make or break time. 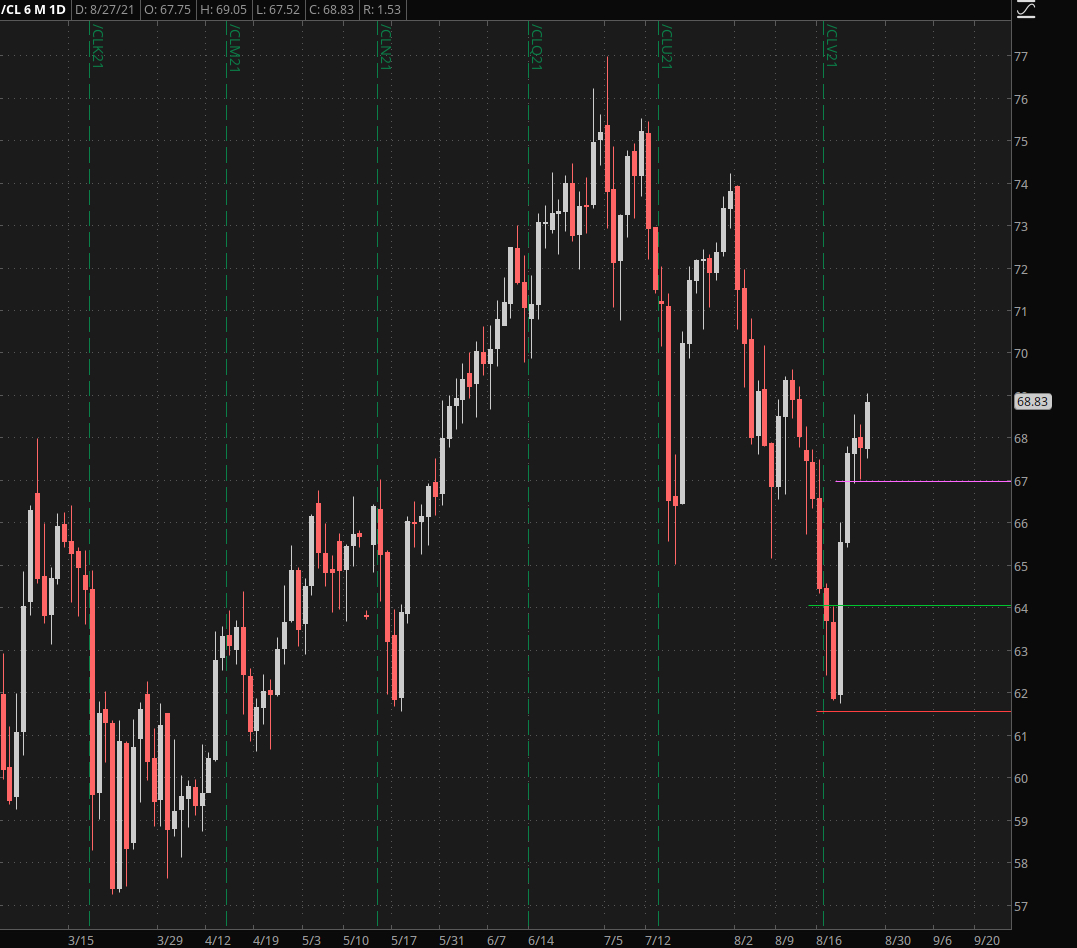 Crude is looking excellent and my trail has advanced to 1.2R. I actually expect it to be touched next week when we most likely will see a retest lower before it reverses and runs higher. I then plan on re-entering on a breach of the same threshold.

This could still be a bear phase snap back and in order to disqualify this scenario we need to see a pop above the 70 mark. Everything after that is gravy.

Script For Next Week

I will be popping in and out here bad weather permitting. If by any chance Accuweather does not live up to its name (meaning it’s sunny) then I’ll be up in the mountains flying my FPV quads.

Sorry guys, I had basically been locked up for two years (illness and then COVID) and this is probably the last time we get to roam free before they lock us up again in fall.

Otherwise, if it’s raining (the odds for that are good) I’ll have plenty of time to catch up and perhaps even put up a post. The Internet at our airbnb is supposed to be decent but I’ve heard that too many times over the years to take the host’s assurances at bare value.

Should things break down in any way (Cryptonaissance report, chat server, site, whatever) please send me an email and I’ll do my best to get things sorted as quickly as possible. Murphy’s Law has rarely disappointed and the betting pool is open 😉

P.S.: Yes there will be plenty of yodeling!