A Week In Switzerland

That perfectly describes how I have been feeling for the past few weeks posting here on the blog. After some introspection I was forced to realize that to spend excessive time on technical analysis during the midst of a summer lull – with a market on cruise control – is not only deeply unsatisfying but clearly does not result in any uptick in traffic or participation.

Ergo it’s time for the Mole to take some time off to recharge those old batteries. Besides the heat here in Valencia has been absolutely unbearable and I have rarely been able to leave the house. We’re talking 95F with 90% humidity here – it’s literally putting prime Florida swampland to shame.

To make matters worse, mask laws are still in full effect in Spain and in such sauna like conditions I last about 5 minutes before I start suffering from acute hypoxia. Time to head to cooler pastures and so I decided to take Mrs. Evil to Switzerland for a few days. 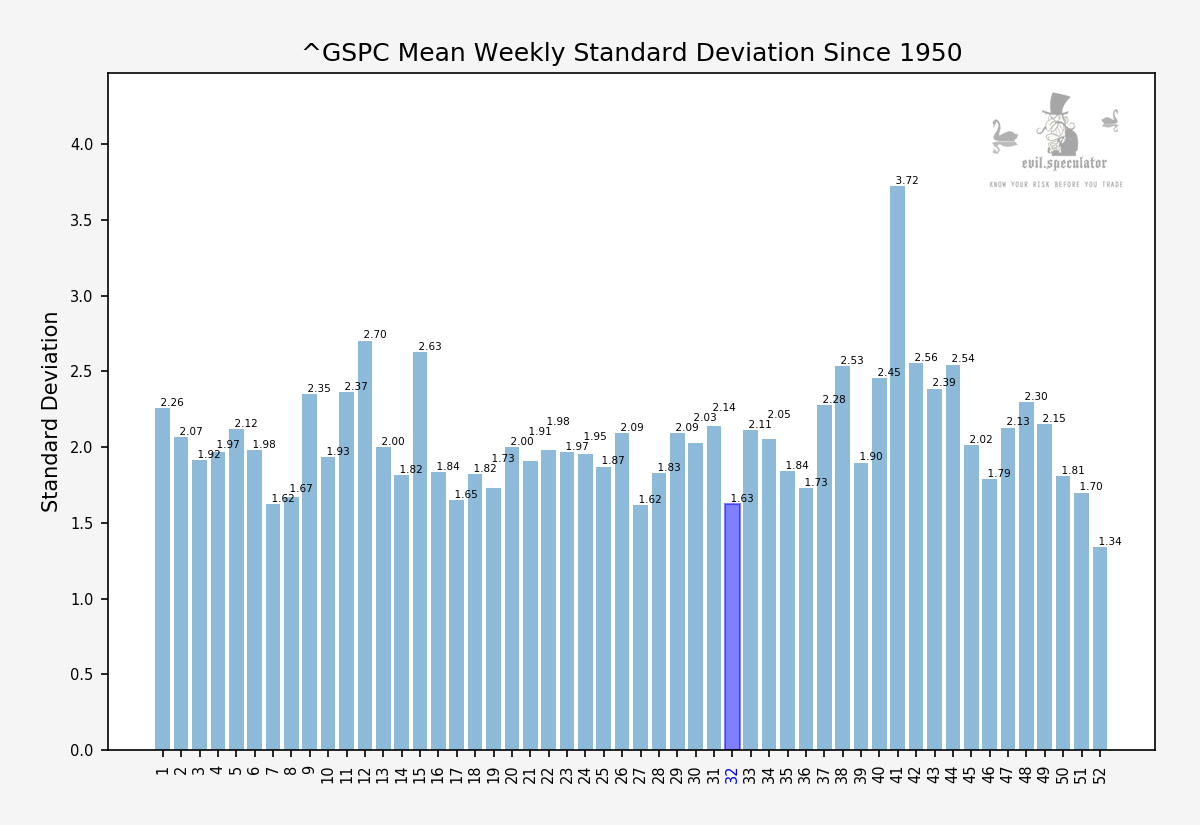 A few charts for the road: First up I should point out that the past week (#32) was one of the slowest of the year. I keep seeing complaints about the lack of volume in equities as of late.

And sure – it’s been historically low – but then again it’s effing summer after an entire year of rolling lockdowns and non-stop drama. Nobody in their right mind wants to be looking at a trading console right now.

Per the stats things should be picking up considerably in the weeks to come and in particular as we’re pushing into September and October. I for one can’t wait as fall is one of my favorite seasons.

September has the highest odds of leading us into a corrective phase. But to be honest, given where we are and that we continue to paint consecutive higher highs during the midst of the summer lull, I would put much money on that potentiality. 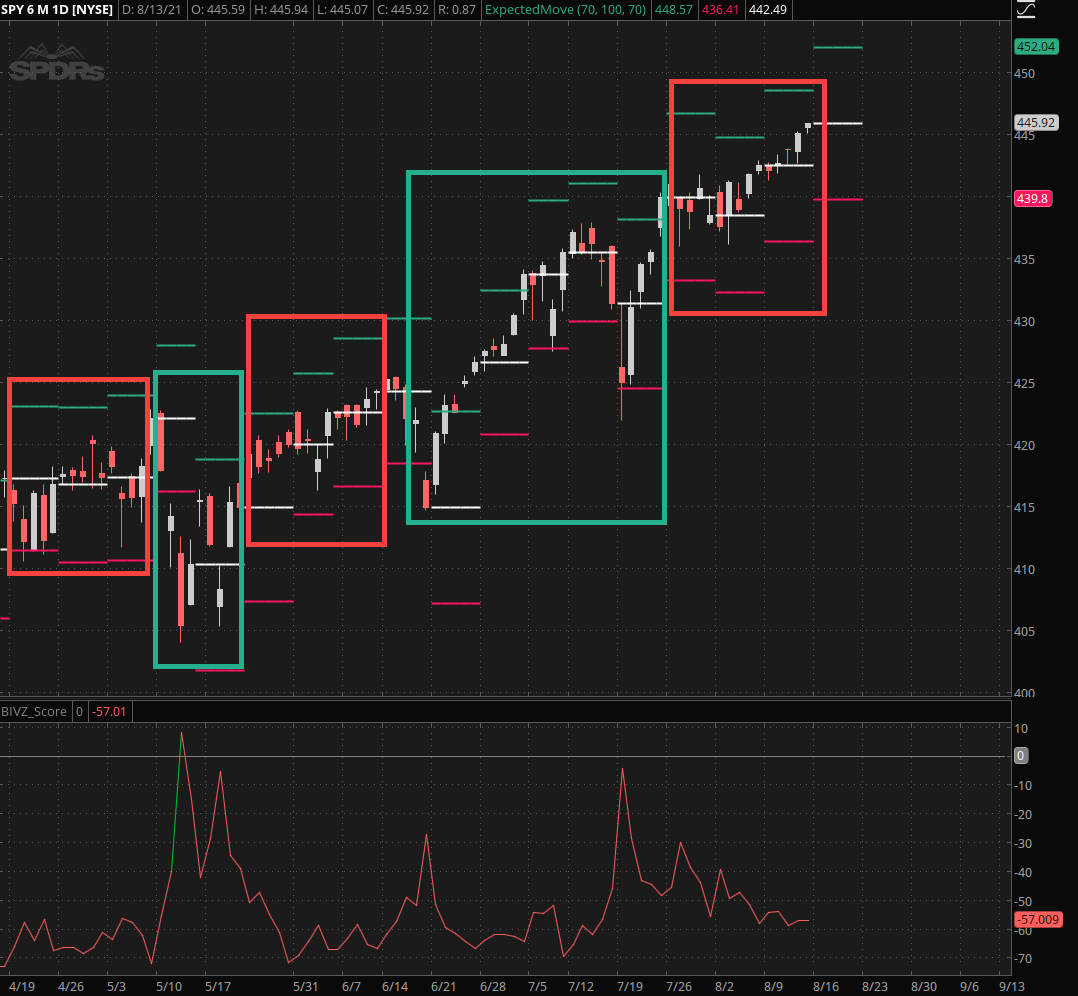 An interesting observation I had the other day was the alternating cycle on how price appears to deviate from how risk is being handicapped. Which results in periods when price swings for the expected move (EM) fence followed by a few weeks of tranquility when price almost does not move at all.

That’s something new and may be a response to the gamma risk play many experienced option traders have been taking advantage of in the past year.

During a few weeks of lull like we just had it’s tempting to start selling OTM puts and calls. Usually that’s done outside of the weekly EM range. But with price barely moving some traders may decide to step it up a little and narrow the range.

Which can be devastating when price suddenly jumps the following week and that is what in fact produces fast moves to the upside, implicitly producing a stair-step effect.

Inversely it’s tempting to do what I have been doing for the past year: Buy cheap butterflies near the weekly EM thresholds – e.g. last Wednesday I took out the following trades:

That’s one BF at 447 (the upper threshold) and one at 437.5 (the lower threshold). To be frank I didn’t have much hope in the lower but it was so cheap (2c) that I just couldn’t say no. Of course it ended up expiring worthless. 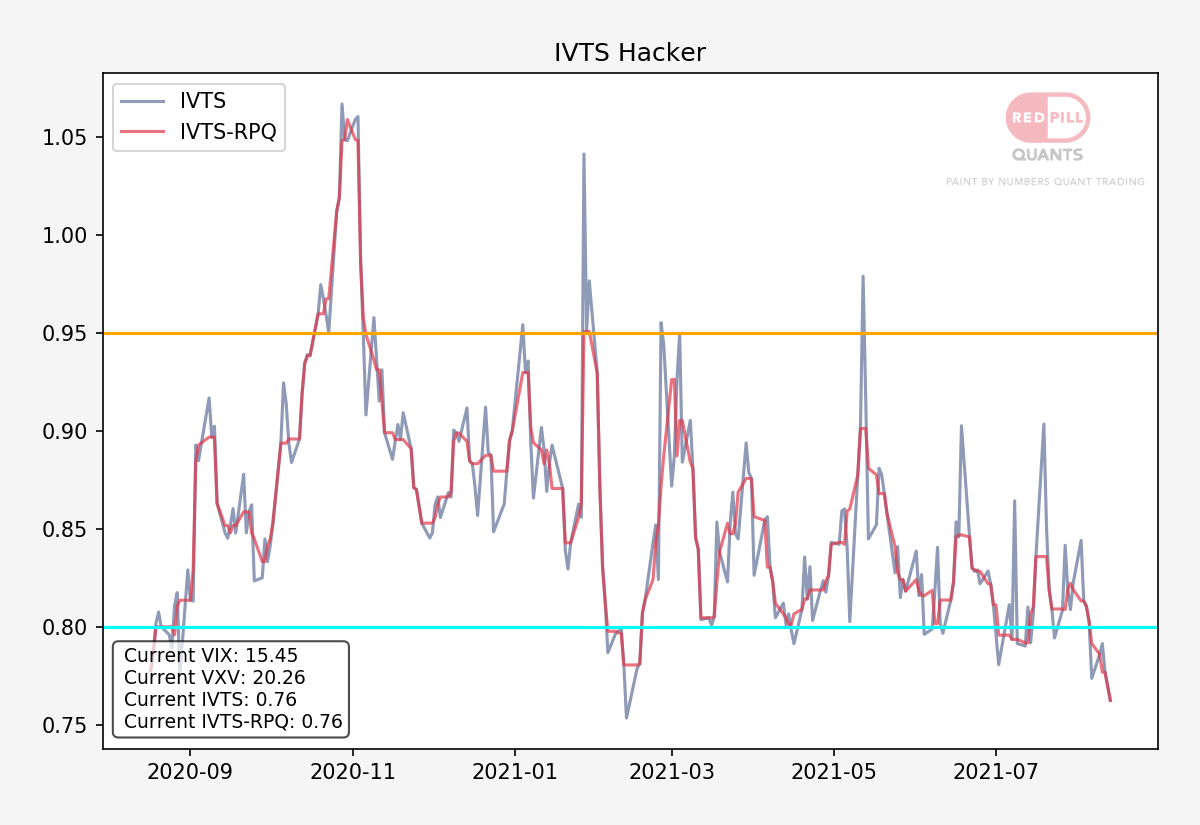 So did the call BF despite the late week jump higher which unfortunately ran out of juice on Friday. And that’s where things get a bit tricky. If the market is now adopting an alternating LV/HV cycle it’ll make things a bit more tricky on the options trading front.

It is very much possible that playing the EM dart game (i.e. throwing butterfly darts at weekly price targets) may have to be suspended until the IVTS pops back > the 0.8 mark. Reason being that the timing seems to line up almost perfectly if one discounts half of May.

Alright, I will be gone until Monday August 23rd. Frankly I am not sure if I have much in terms of Internet access where I’ll be staying. So if anything blows up please email me here and I’ll try to get to it within a day or so.

I leave you with this.